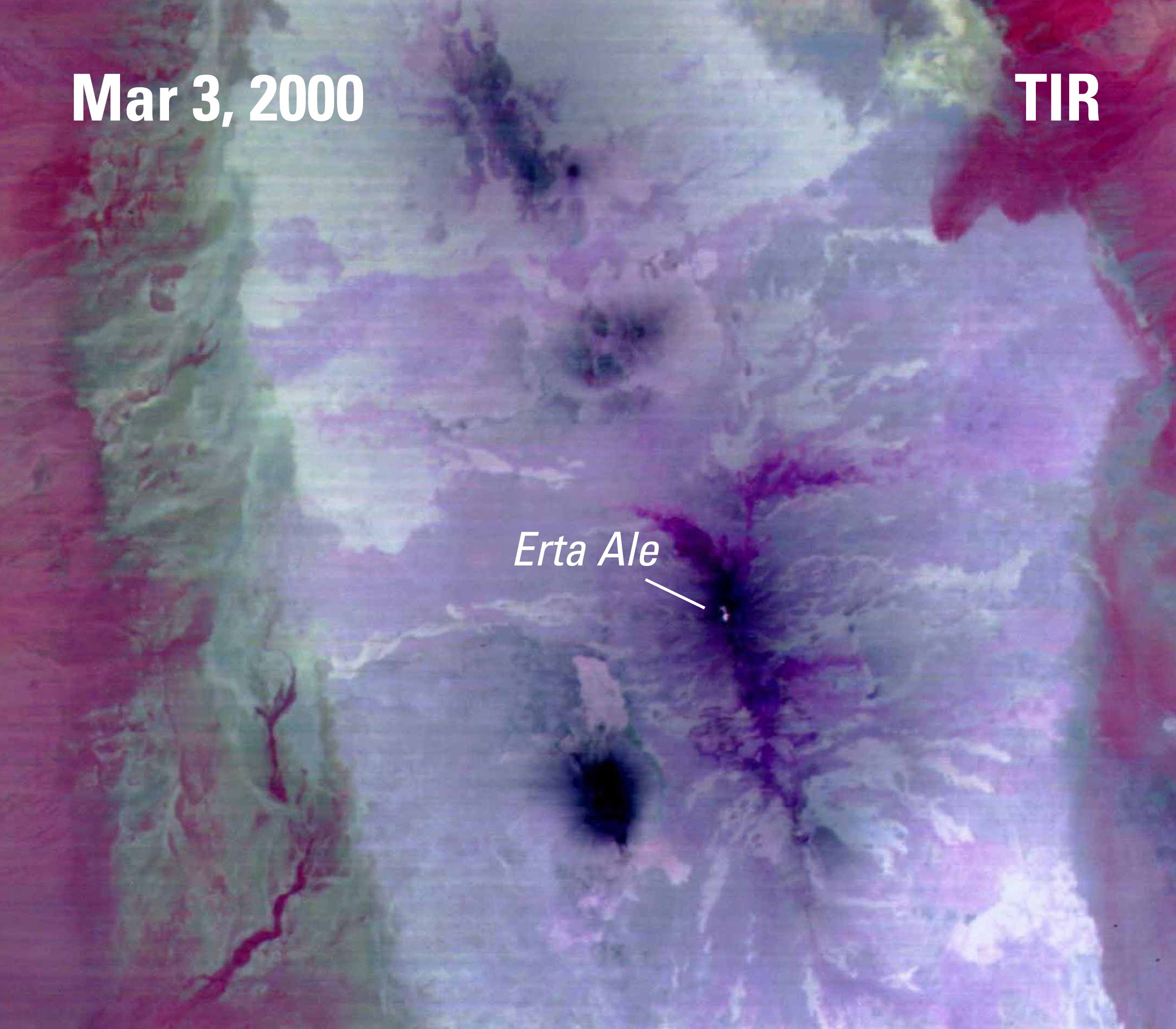 A composite image of ASTER’s first thermal data captured on March 3, 2000. The bright, white pixels in the lower center of this composite image indicate the location of Erta Ale’s lava lake in its crater.

Fifteen years ago this month the Advanced Spaceborne Thermal Emission and Reflection Radiometer (ASTER) sensor onboard NASA’s Terra satellite began returning images. The first image from ASTER’s thermal infrared (TIR) subsystem was captured on March 3, 2000 of the western edge of the volcanic Afar Triangle in Ethiopia (see image to the right). This image represents not only ASTER’s first thermal image, but also the first high resolution multispectral thermal data collected by a sensor on a satellite. Since this first image 15 years ago, ASTER data has continued to be valuable to geologic and volcanic applications, as well as many other scientific disciplines.

In addition to the TIR subsystem, the ASTER sensor has two other subsystems: the visible and near-infrared (VNIR) and the shortwave infrared (SWIR). The VNIR subsystem is also capable of collecting stereoscopic data, which provides topographic information. Spatial resolution varies among the data that the ASTER sensor captures: VNIR data has 15 meter resolution, SWIR has 30 meter, and TIR has 90 meter. The varying resolutions and data types allow for different aspects of volcano activity to be investigated. For example, the high spatial resolution thermal data from ASTER helps scientists to remotely determine and measure both obvious and subtle thermal anomalies.

In Murphy et al., 2013 the authors measure thermal anomalies of four volcanoes, including Erta Ale, an isolated shield volcano located within the Afar Triangle and Ethiopia’s most active volcano. They calculate surface temperature from the high resolution ASTER imagery and use it along with nighttime calibrated radiance from lower resolution data from the Moderate Resolution Imaging Spectroradiometer (MODIS), also onboard the Terra satellite. With these data, the authors were able to determine new locations of thermal anomalies and detect changes in existing anomalies, such as the rise or fall of Erta Ale’s lava lake. The ASTER Volcano Archive also monitors thermal activity at Erta Ale, among other volcanoes, on a consistent basis.

The ASTER images below show Erta Ale’s different volcanic features. Erta Ale’s most recent eruption was in 1967, but the eruption has been continuous, leading to smaller fissure eruptions that have produced new lava flows. Erta Ale also has a molten lava lake in its crater. The lava lake is easily detectable and measureable from 90 meter ASTER TIR imagery. Like in the image of Erta Ale from 2000, the white pixels in the TIR image from March 2, 2015 (bottom right), show the extent of the hot lava lake. In the 30 meter VNIR image (bottom left), the lava lake, lava scars from past eruptions, and current lava flows, are differentiated by different shades of black. Scientists can use VNIR images to study past lava flows and construct the eruption history of a volcano. 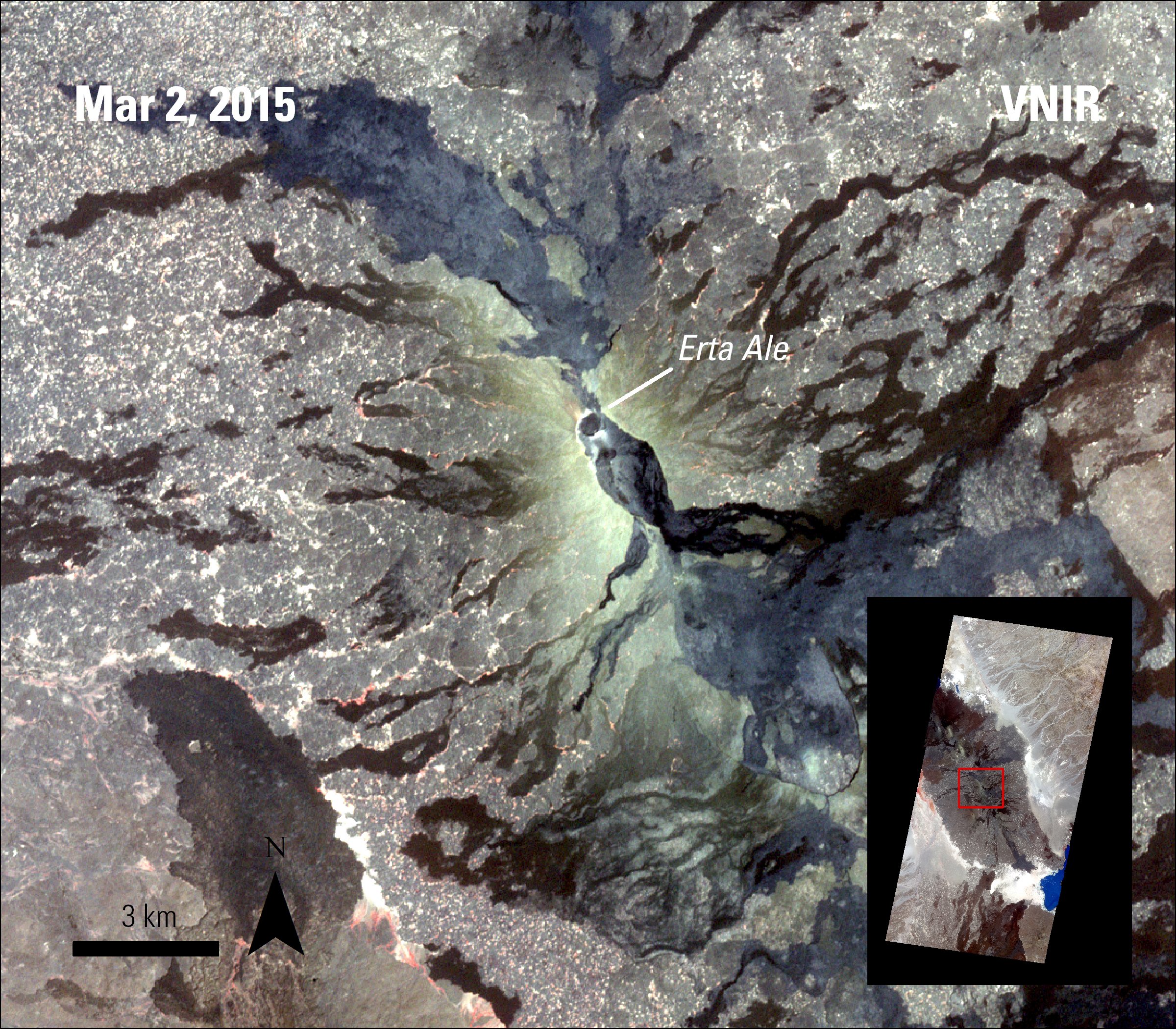 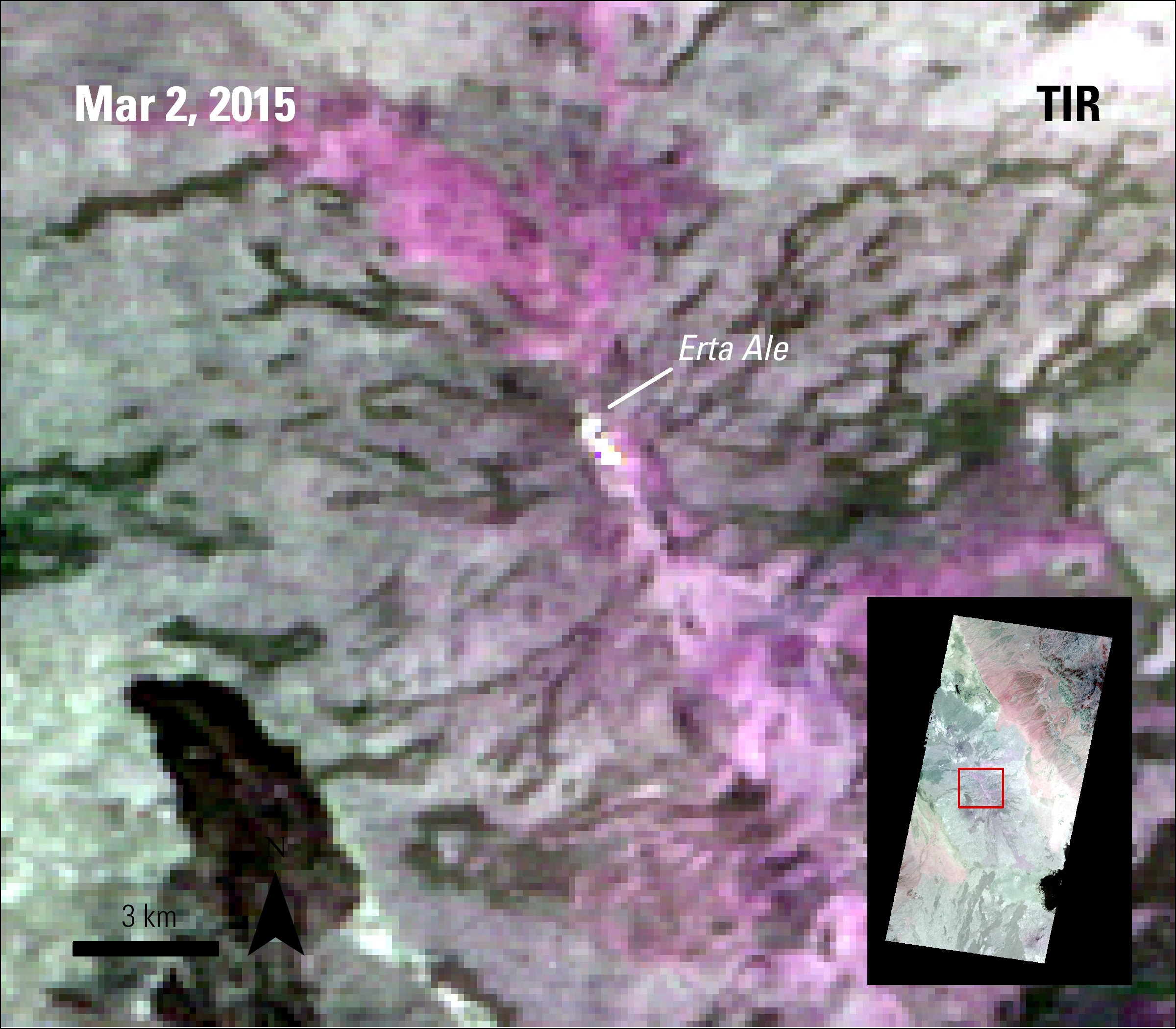