Autumn Foliage in Eastern Asia: A View from Space 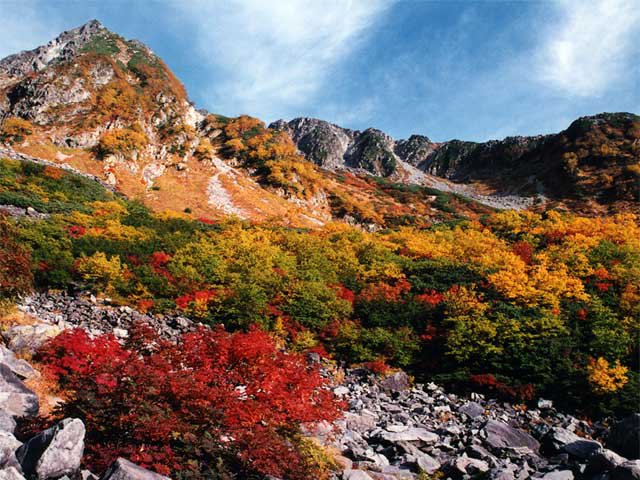 Autumn foliage showing shades of green, yellow, orange, and red in the Hida Mountains of Japan.
By Inti-sol (Own work) [GFDL/CC-BY-SA-3.0]

As summer gives way to autumn in the Northern Hemisphere, the landscape begins to change dramatically. The sun rises later in the morning and sets earlier in the evening. The temperatures start to feel cooler, and those crisp autumn mornings are a reminder that winter is coming. Decreased day length and cooler temperatures contribute to one of autumn’s most iconic features: the changing of leaf colors in deciduous trees. The scientific term for the beautiful hues of yellow, orange, red, and brown seen in forests every autumn is called senescence, or the degradation of plant cells that causes leaves to change colors, and eventually “fall” off of the trees. This is the final step in the annual phenology of deciduous trees and is an aesthetically pleasing by-product of plant senescence. The various shades of leaf color are driven primarily by three pigments: Chlorophylls (green), Carotenoids (yellow/brown/orange), and Anthocyanins (red/purple).

Looking at satellite remote sensing imagery is one way of viewing this “wave” of changing leaf colors. The Moderate Resolution Imaging Spectroradiometer (MODIS) contains red, green, and blue reflectance bands that allow us to see a true color representation of the Earth. The images below show a series of 16-day combined Aqua/Terra MODIS reflectance images (MCD43A4) that have been adjusted using a bidirectional reflectance distribution function (BRDF) to model reflectance directly overhead (nadir). One key advantage of this particular BRDF reflectance data product to observe change over time is observations from both Terra and Aqua MODIS are used, providing a higher probability for quality input data and making it less likely that there will be missing data due to cloud cover. The data product is generated daily for a 16-day retrieval period, which is helpful for observing autumn phenology which can occur quite quickly at higher latitudes.

Click through the series of MODIS BRDF-Adjusted Reflectance true color images to watch the “brown wave” of autumn from September 1 to October 22, 2016. Notice the dark green forests stretching from eastern Russia, down through North and South Korea, and into Japan in the images from September. By the end of September, the “brown wave” has reached the northern edges of the region, appearing in shades of tan and brown. By mid-October, much of the region is seeing autumn foliage, but parts of South Korea and Japan, which have longer daylight hours and warmer temperatures due to their southerly locations, still appear in shades of green. Elevation also plays a factor in autumn foliage. For example, the higher elevations of inland Japan appear in tan-brown by mid-October, compared to the surrounding lower elevation regions along the coast, which still appear green during this time period. Areas near the coast are also regulated by the moderating effects of the ocean. By October 22, much of Japan and the eastern coast of South Korea appear in shades of copper, indicating that fall foliage is in full swing. Meanwhile, deciduous trees in the northern regions of eastern Asia have dropped their leaves and the area appears in shades of brown. 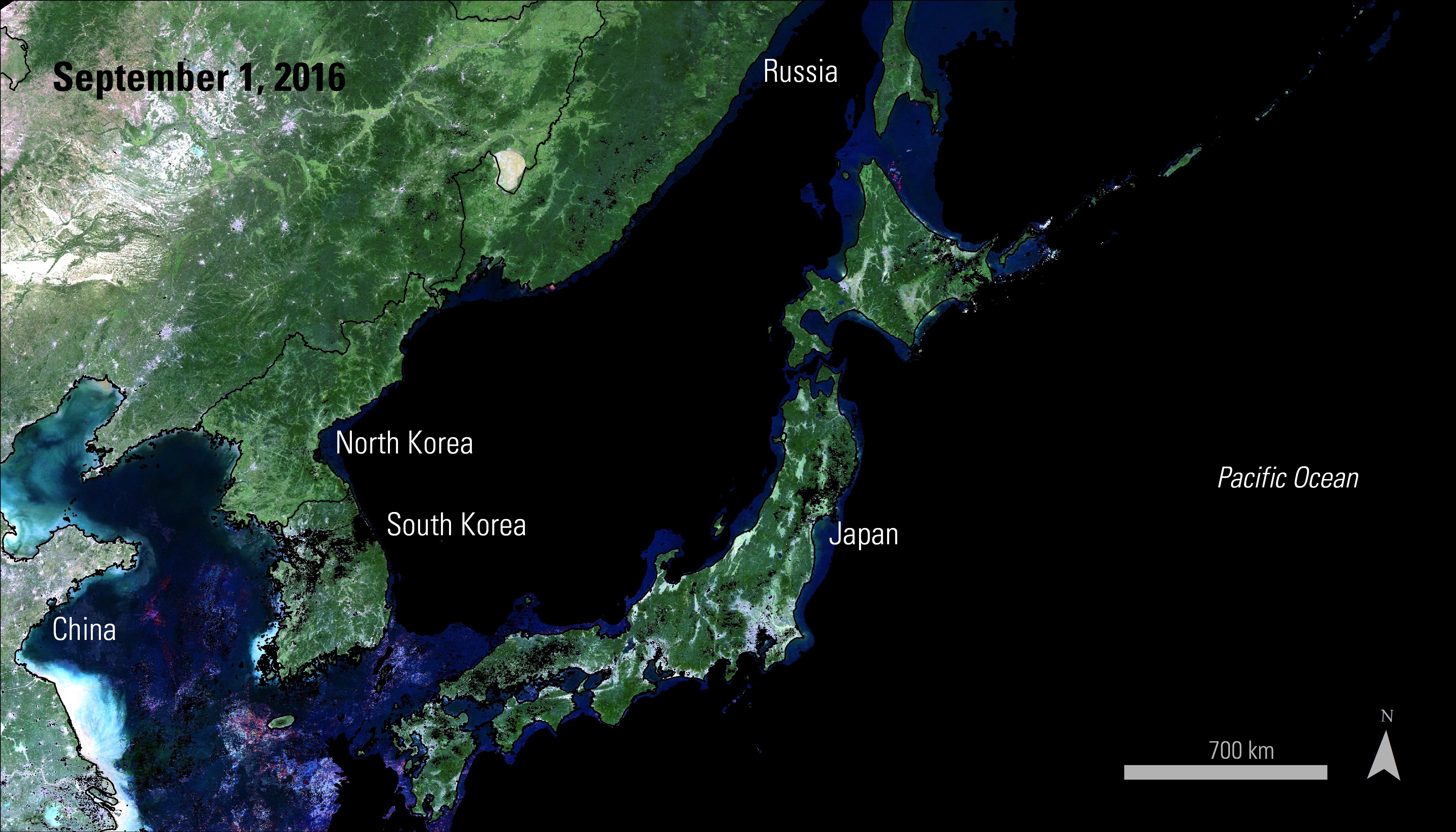 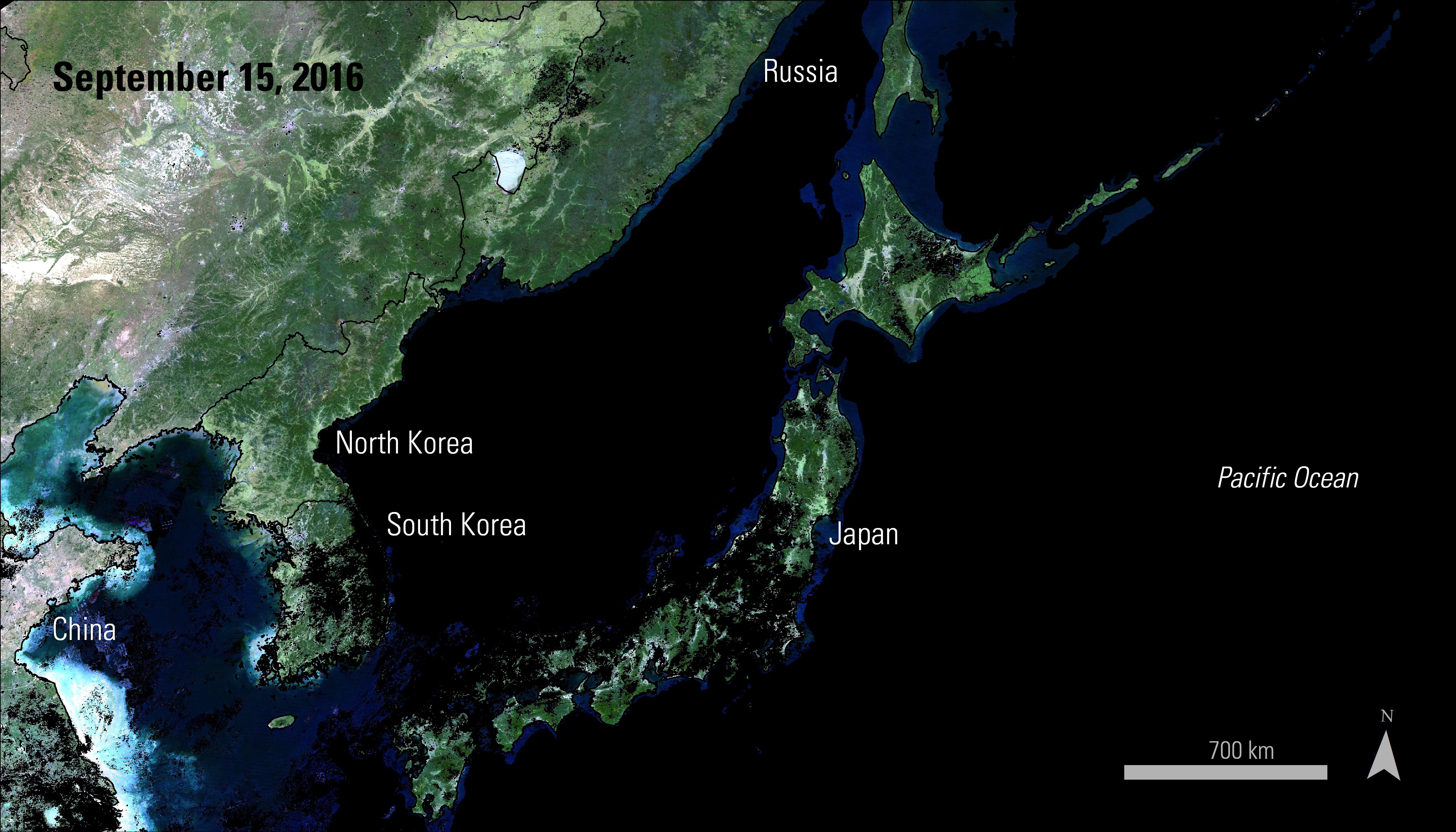 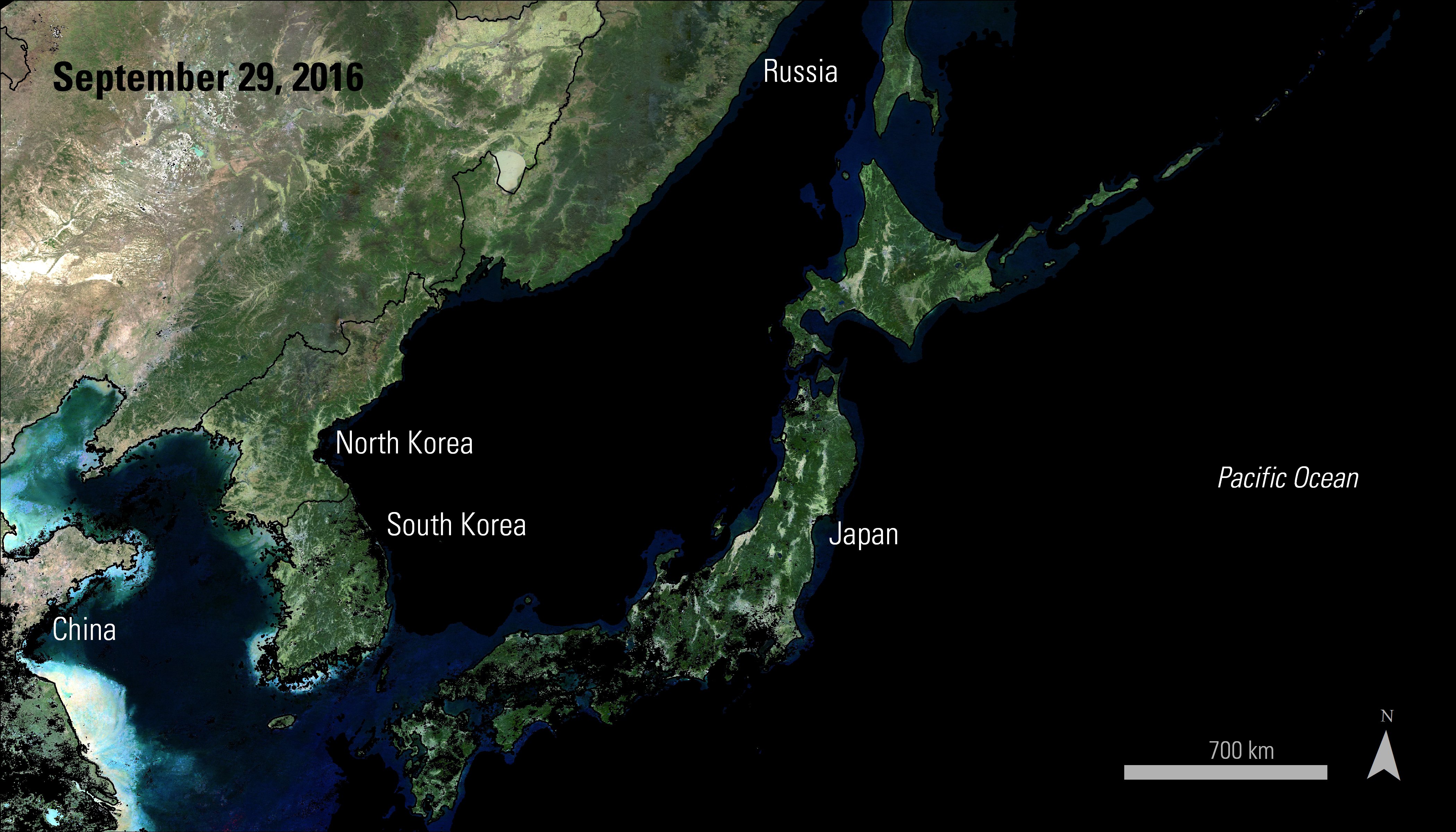 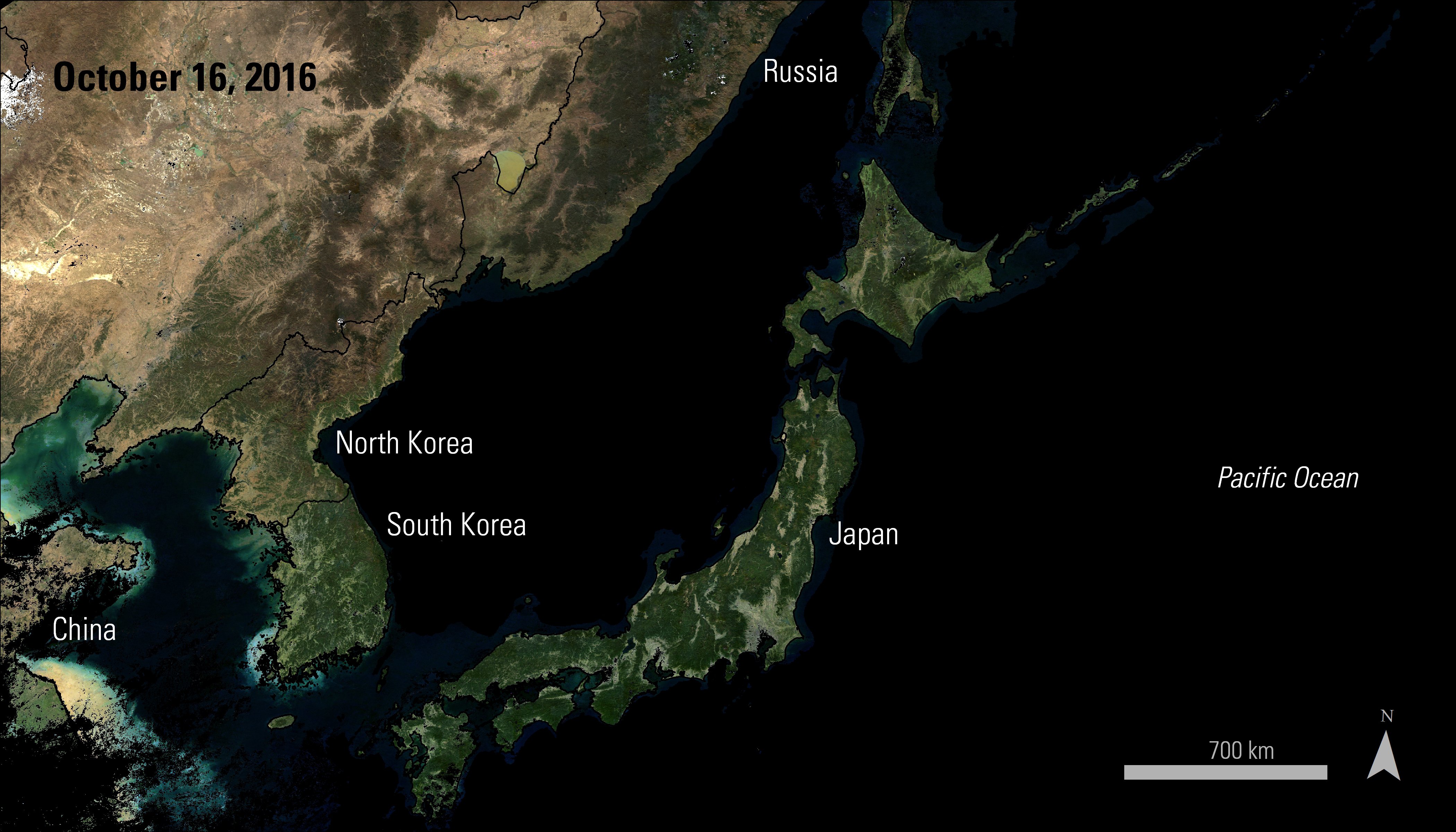 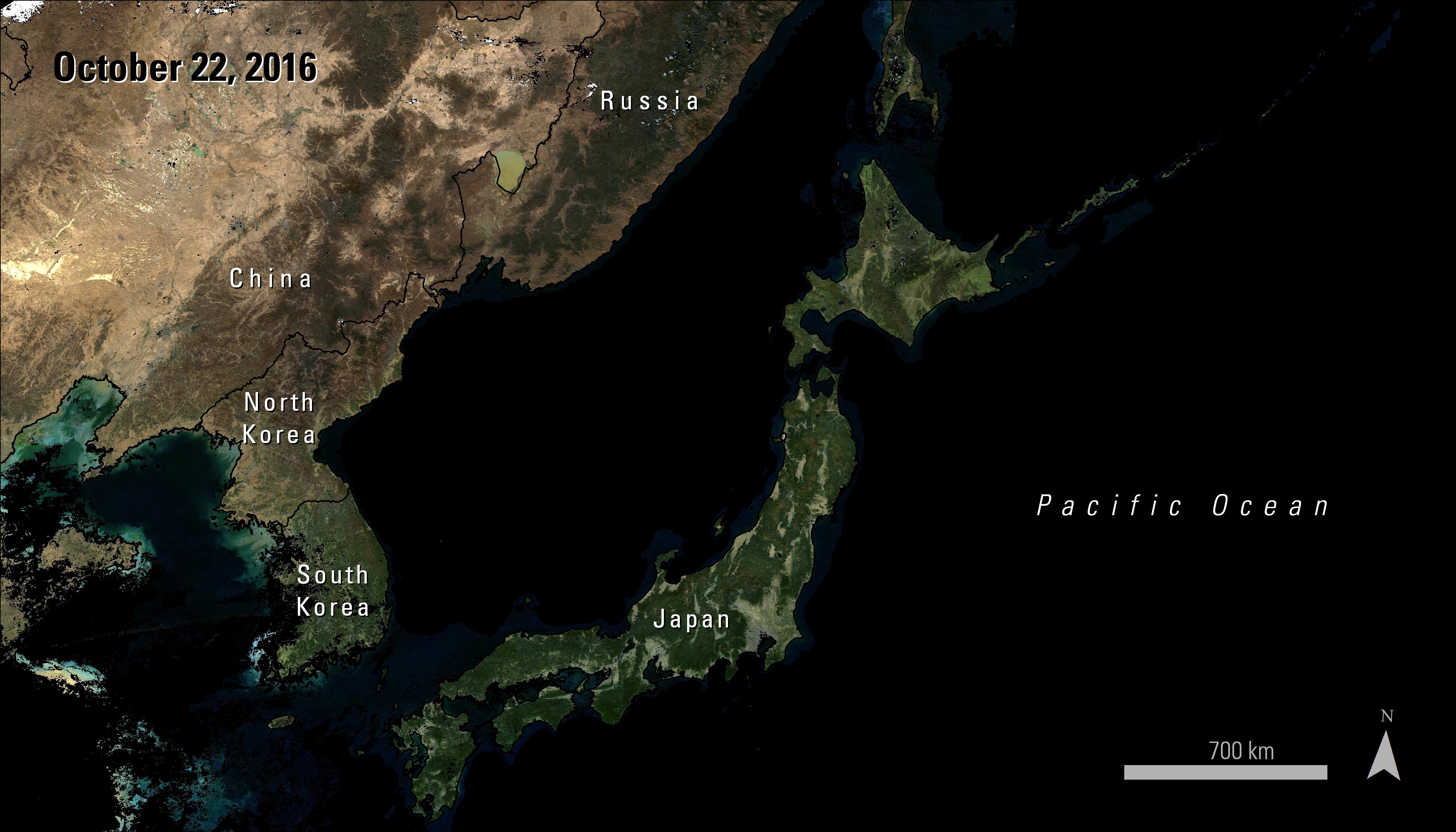