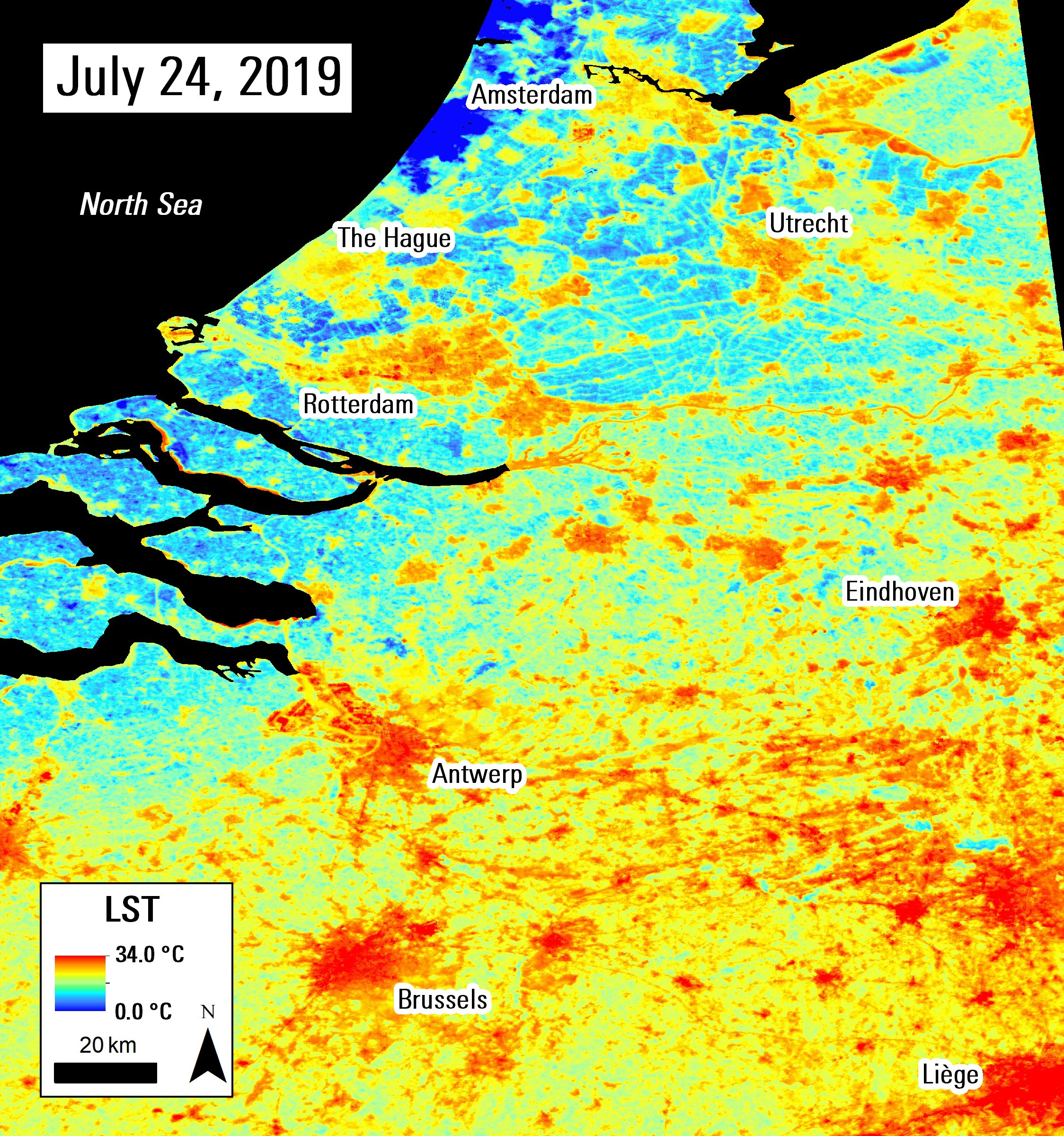 ECOSTRESS land surface temperature (ECO2LSTE.001), from July 24, 2019 around 9:22 PM local time, over Belgium and the Netherlands, showing warmer cities (red) stand out from the cooler surrounding agricultural areas. The cities of Eindhoven, Netherlands, and Angleur, Liège, Belgium both broke over 70-year-old records for high temperatures on this day, only for the records to be broken again the following day.

For the second time in as many months, Europe was gripped by an extreme heat wave, breaking temperature records in 12 countries. Record high temperatures were set on Thursday, July 25, in the Netherlands at 40.4 °C (104.7 °F), and Belgium at 41.8 °C (107.2 °F). Germany reached 42.6 °C (108.7 °F), as did Paris, France, which broke a record that had stood for over 70 years by more than 2 degrees Celsius. For Europeans, this may sound like a “broken record” as the continent suffered a separate extreme heat wave just a month prior in late June, when eight countries experienced record-breaking heat, including France’s all-time highest recorded temperature at 45.9 °C (114.6 °F). While these temperatures are still far from the highest recorded temperatures on Earth, they are abnormal for Europe, where less than 5% of households are air-conditioned. Exposure to extreme heat waves can lead to significant health risks, such as heat stroke and cardiovascular and respiratory failure, which can result in death. The elderly population is particularly at risk during these extreme heat events.

Extreme heat events are even more dangerous in large cities, as areas of dense impervious surfaces from buildings, roads, and parking lots absorb heat during the day and reradiate the heat back into the city at night. This leads to overall warmer temperatures in cities than the surrounding areas, known as the Urban Heat Island (UHI) effect. Fortunately, there are solutions that can be put in place to mitigate the impacts of UHIs and extreme heat waves in cities. Those include long-term solutions, such as increasing green space and whitening roofs. There are also potential short-term solutions, such as installing mist spray systems in public places. One way to identify at-risk “hot spots” within cities that would benefit from these solutions during heat waves is through remote sensing. One major benefit in using remote sensing data, in addition to in-situ weather station temperature readings, is that they provide a spatially continuous map of urban temperatures. Remote sensing sensors detect land surface temperature (LST), or the temperature of the surface being detected, similar to air temperature measured at weather stations, but the two measurements can differ, especially during the day as LST skyrockets over sunlit areas. NASA’s ECOsystem Spaceborne Thermal Radiometer (ECOSTRESS) is a new sensor that captures LST at 70-meter (m) resolution. Installed on the International Space Station (ISS), ECOSTRESS is novel in that it captures multispectral thermal observations globally from space at relatively high resolutions at different times throughout the day.

ECOSTRESS captures radiance, which is converted to emissivity and LST. In turn, ECOSTRESS produces higher level products such as Evapotranspiration, Evaporative Stress Index, and Water Use Efficiency (check out all available ECOSTRESS products available from NASA’s LP DAAC). While the main goal of the ECOSTRESS mission is to better understand how much water plants need and how they respond to stress, ECOSTRESS can also be used to observe heat-related phenomena, such as extreme heat waves and the UHI effect. The images to the right and below are ECOSTRESS LST observations from July 24, 2019—in the middle of the record-breaking heat wave. In the image above, notice the warmer cities evident in shades of orange-red from the cooler surrounding agricultural landscape. All-time maximum temperatures for the countries of Belgium and the Netherlands were broken on this day—in Eindhoven, Netherlands at 39.3 °C (102.7 °F) and Angleur, Liege, Belgium at 40.2 °C (104.4 °F). However, both records only stood for one day as temperatures climbed even higher in both countries on July 25, 2019.

The image below shows an ECOSTRESS observation over Paris, France from the evening of July 24, 2019. Dense regions of the city or areas with higher impervious surface area appear warmer than surrounding rural forests and agricultural areas, in part because of the UHI effect and the thermal characteristics of different land surfaces. Notice the contrasting temperatures between Charles De Gaulle (CDG) International Airport and cooler surfaces such as the Seine River, or the gardens at the Palace of Versailles. Using another sensor archived at the LP DAAC, the Terra Advanced Spaceborne Thermal Emission and Reflection Radiometer’s (ASTER) Level 1 Precision Terrain Corrected Registered At-Sensor Radiance (AST_L1T.003) product allows for a higher resolution (15-m) natural color view. That can be useful when combined with the relatively high resolution from ECOSTRESS LST in order to identity localized regions within an urban area that may be at higher or lower risk of heat-related illness during an extreme heat wave event. 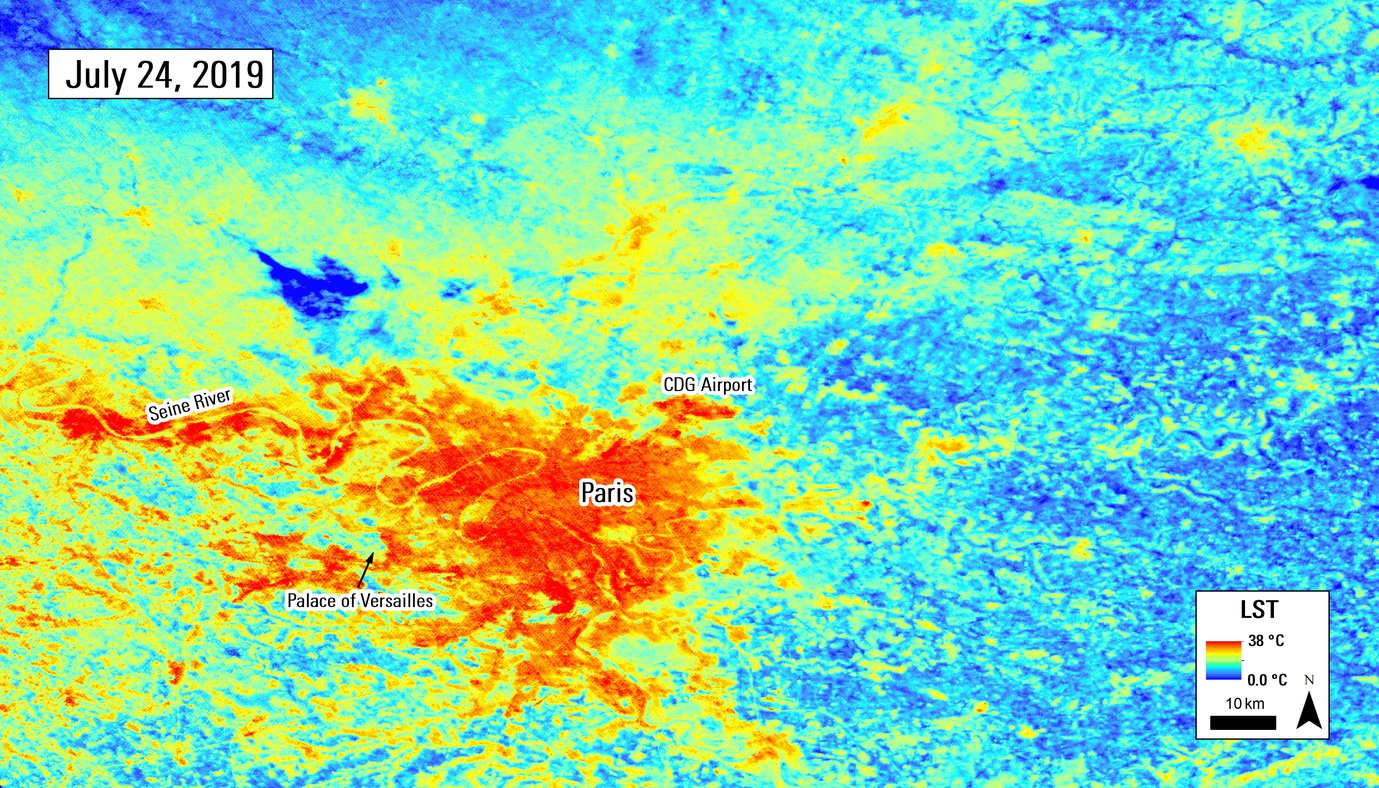 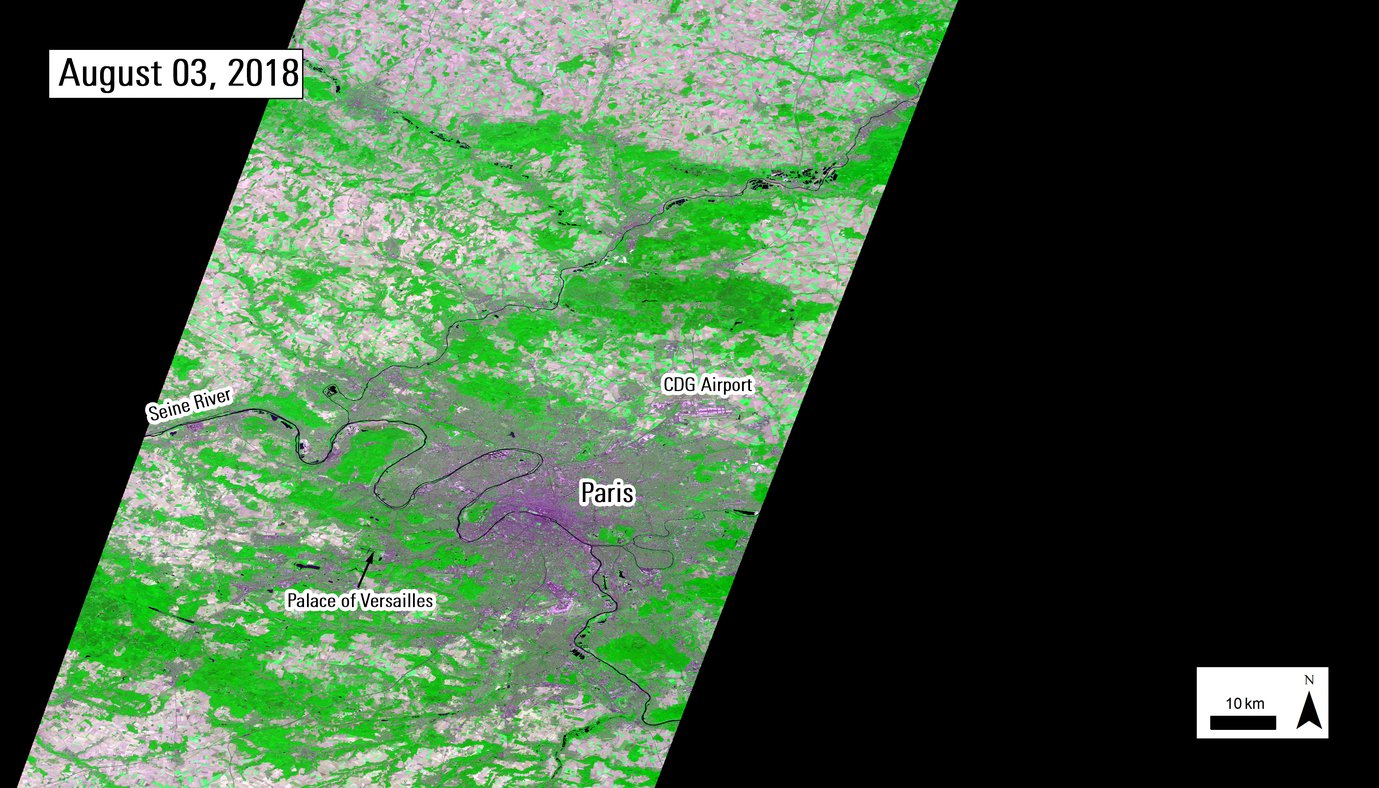 The image on the left is ECOSTRESS 70-meter land surface temperature from July 24, 2019 around 7:30 PM local time over Paris, France. This image was captured during the recent extreme heat wave that broke all-time temperature records in the city. Areas of dense impervious surfaces such as Charles De Gaulle Airport absorb and reradiate more heat leading to higher land surface temperatures, while green spaces such as the gardens of the Palace of Versailles or water bodies such as the Seine River are cooler. The image on the right is a Terra ASTER 15-meter natural color composite from August 03, 2018, over Paris, France.