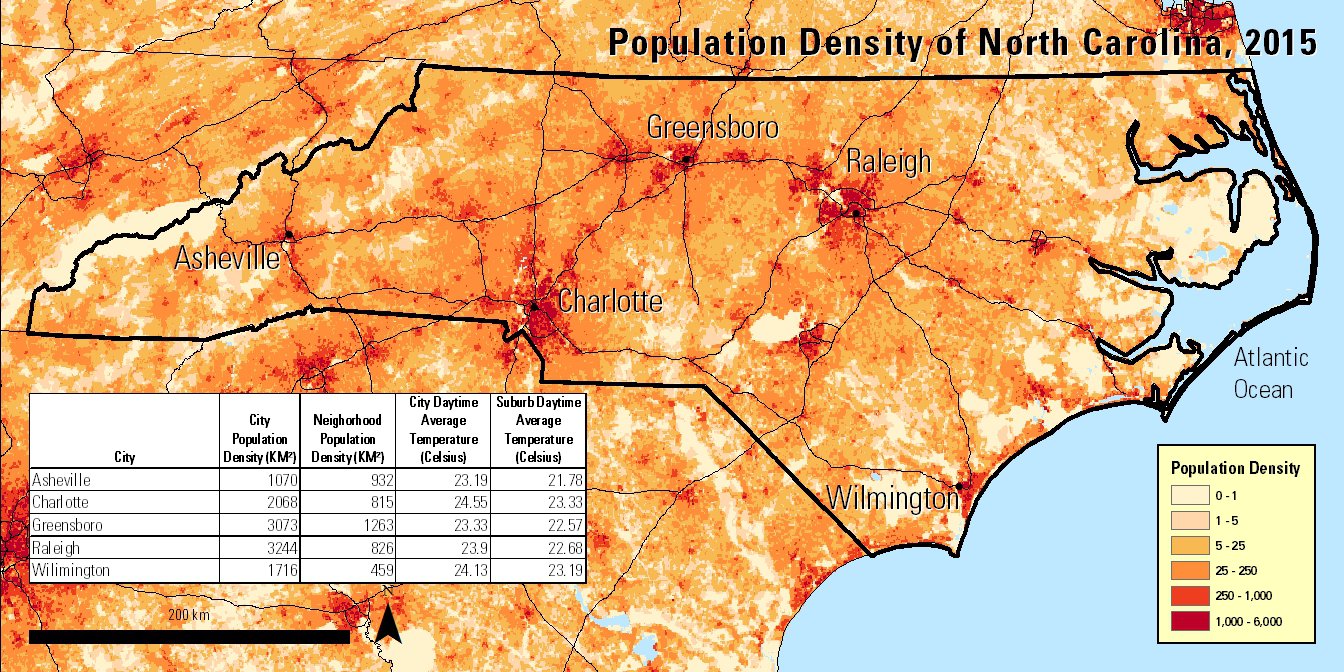 This map shows the 2015 GPW Un-Adjusted Population Density Dataset for locations used in the AppEEARS sample. The table to the left provides temperature estimates from MYD11A2.006, and population Density Measurements for each of the ten points.

Urban areas around the globe are continuing to grow, becoming not only larger in geographic size, but increasingly denser in human population. Urban areas with large populations often have dark, man-made surfaces such as parking lots, roads, and blacktop buildings. These surfaces absorb large amounts of solar energy, thus resulting in higher surface temperatures than their lighter, natural counterparts. This phenomenon is commonly described as the Urban Heat Island (UHI) effect, where temperatures often reach a high temperature threshold which may impact human health. Remotely sensed and other geographic data, such as population and thermal measurements can be used to understand the impacts that human populations have on these temperature events.

Through the Socioeconomic Data and Applications Center (SEDAC), the Center for International Earth Science Information Network’s (CIESIN) Gridded Population of the World version 4 (GPW4) data collection is distributed in a Collection that includes two UN-adjusted datasets for population count and population density. In the GPW4 data collection, population count is based on official census and other official national demographic estimates where census is unavailable. These estimates are nationally adjusted based on the United Nation’s World Population Prospects 2015 revision to produce the UN-adjusted datasets. The population density data product divides population count with land area estimates to display person per square kilometer, a metric more appropriate for cartographic map production and for cross pixel inter-comparison. This population data can be used in conjunction with the 8 day composite Aqua Moderate Resolution Imaging Spectroradiometer (MODIS)  Land Surface Temperature (LST) (MYD11A2) data product to help understand a human and thermal activity interaction. These geographic data show boundaries of these measurements over time which are critical for scientists to observe when studying phenomena such as UHI’s.

To demonstrate this dynamic, time-series data spanning from 2000 to 2015 from these datasets are extracted using the Application for Extracting and Exploring Analysis Ready Samples (AppEEARS). AppEEARS provides data values and quality data values for the pixel associated with each point location as well as visualizations that can be explored directly within the application. The area of interest for this sample request includes 10 locations in the state of North Carolina. Five of the locations are the downtown areas for selected cities across the state with a dense population, the remaining five locations are just outside these city limits with sparser population (see map on the right hand side). The geographic coordinates representing these locations were selected using census data that exhibit dense downtown areas and sprawling, less dense neighborhoods.

Interactive visualizations from AppEEARS provide summary statistics of the data and quality data for these ten points, which can be seen in the box and whisker plots below. The summary statistics show that as the UN-Adjusted population count and density lowers in these 5 urban areas, the temperature decreases as well.  However, Asheville, which has the smallest population count and density among the samples shows the largest decrease in temperature between its downtown and suburban points.  These results show that the interaction with humans and the environment is complex, and that the population and temperature data used here are just a few datasets that can be used to show the correlation between humans and land surface temperature. The map below shows the population density of North Carolina and compares this data with Land Surface Temperature data statistics. 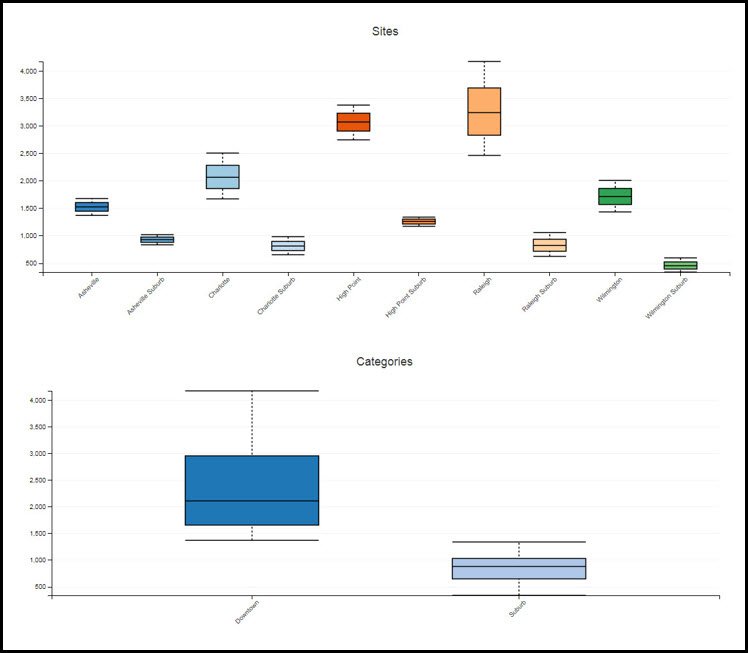 The top plot shows the population density of each location using the GPW Population Density Dataset for 2015. The bottom plot from AppEEARS displays the range of population density values for all locations based on two categories: “Downtown” and “Neighborhood.” 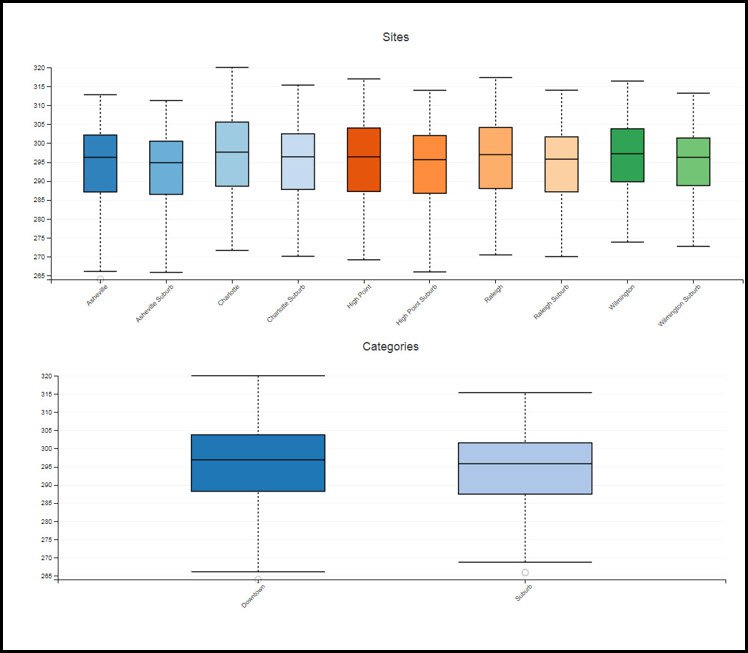