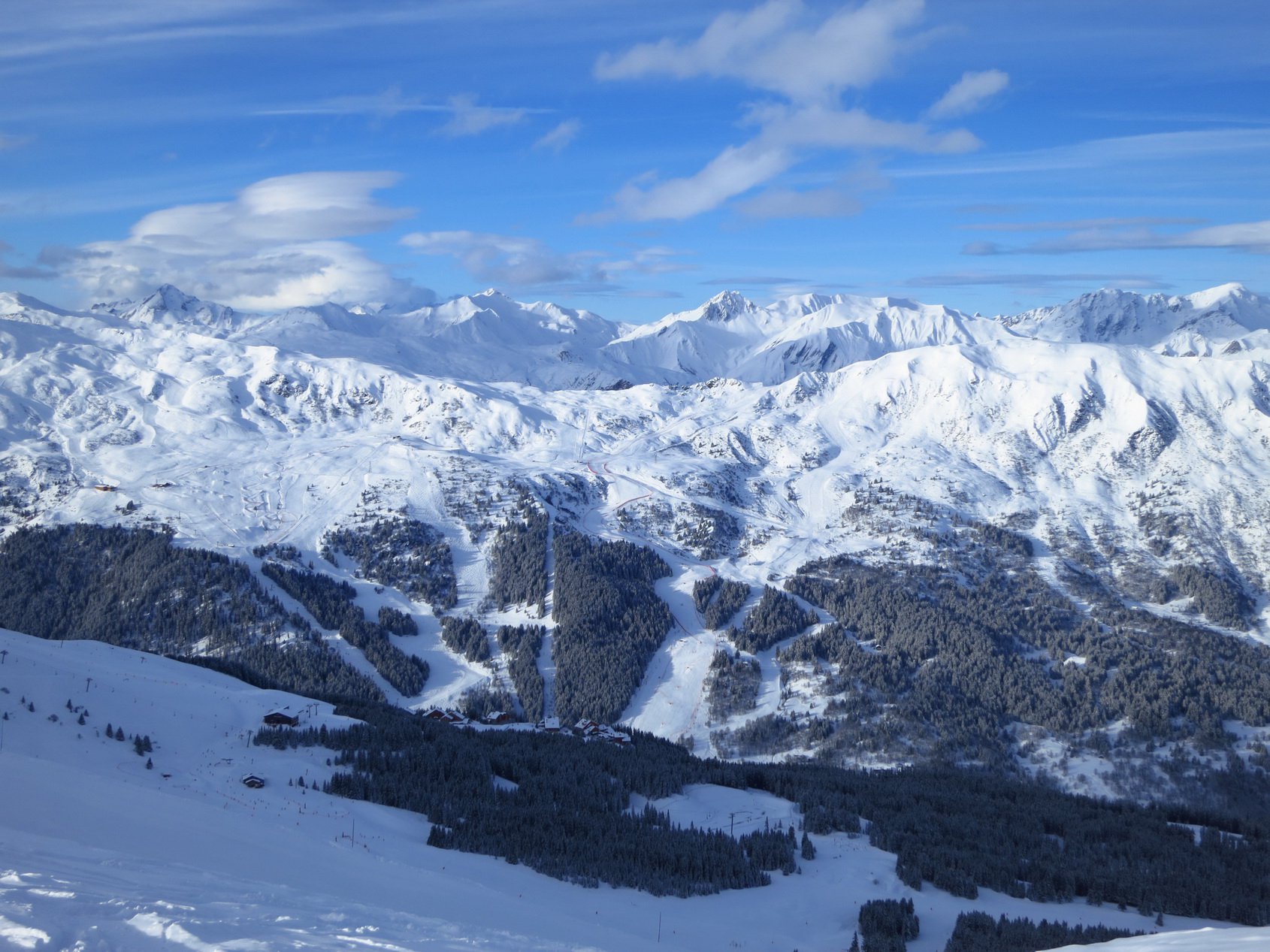 View of La Tania Ski Resort in the French Alps taken in February 2014.

Les Trois Vallées, or Three Valleys, is considered the largest ski area in the world, with around 600 kilometers of ski slopes connected by 183 ski lifts. The ski area is high in the French Alps, ranging from around 600 meters all the way up to 3,230 meters above sea level. One of the resorts located in the valley is called La Tania, pictured at right. La Tania Ski Resort was used notably in the 1992 Winter Olympics. By late autumn, ski enthusiasts anxiously awaiting a new skiing season keep an eye on the weather in this region—hoping for cold temperatures and, of course, snowfall.

A combination of datasets derived from MODIS, or the Moderate Resolution Imaging Spectroradiometer, can be used to assess a long-term record of ideal skiing conditions in the Alps—cold temperatures and snow cover. The Application for Extracting and Exploring Analysis Ready Samples (AppEEARS), a web-based data extraction and visualization tool, can be used to explore Earth surface dynamics from MODIS datasets including land surface temperature and snow cover. Point samples can be ordered in AppEEARS by submitting a list of geographic coordinates for the desired location(s). Below are the results from requesting 16 years of daily Terra MODIS Land Surface Temperature (LST) data in addition to Terra MODIS-derived Daily Snow Cover data for a point on the slopes of La Tania.

Using the data visualizations in AppEEARS, it is easy to observe skiing conditions from previous years by looking at daily daytime Terra MODIS Daily Land Surface Temperature data (MOD11A1) are distributed by the Land Processes Distributed Active Archive Center (LP DAAC). LST data and the Normalized Difference Snow Index (NDSI) daily snow cover data for a point over La Tania Ski Resort. Note that daily LST is measured in Kelvin, and NDSI is described as percent of the pixel (500 meters) covered in snow. The first image below shows the distinct seasonality of snow cover at La Tania and the periods that have more frequent snow cover between 2000 and 2016. This long term data archive can also be useful for looking at the overall trend in snow cover over this time period. The second image below demonstrates the inverse relationship between LST and NDSI—which explains why skiers watch the weather in hopes of colder temperatures and potential snowfall, which allow for the snow cover needed at the ski resorts. The third image below highlights the 2015-2016 ski season, where La Tania opened on December 5, 2015, and closed on April 17, 2016. These dates coincide closely with the presence/absence of snow as seen from the MODIS daily snow cover data. AppEEARS data visualizations offer a great starting point from which to explore the available data for your area of interest. Results from AppEEARS requests are also available for download, giving users their desired data at their fingertips in order to conduct more in-depth analysis. 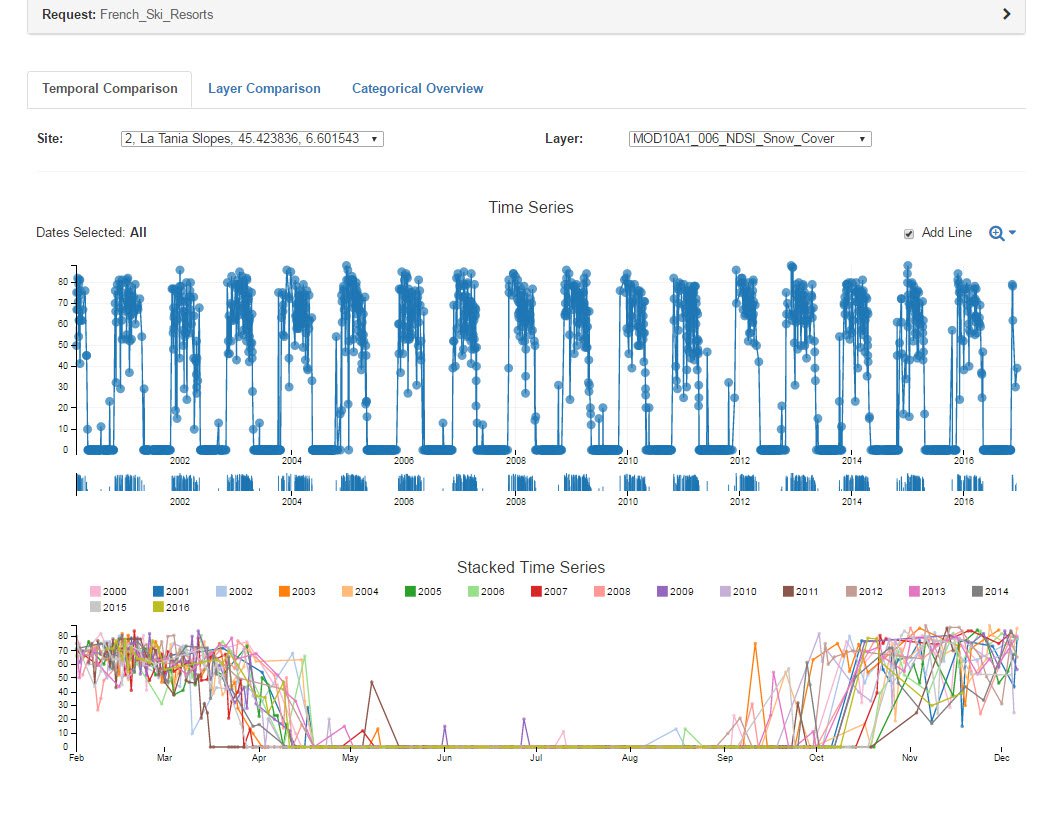 Example of using AppEEARS temporal comparison functionality to explore 16 years of daily MODIS snow cover data distributed by NSIDC at La Tania Ski Resort as a continuous (above) or annual stacked (below) time series. Additional information on how to use AppEEARS for data extraction and analysis can be found here. *This graph visualizes NDSI Snow Cover (%). Additional discrete data (missing data, land/water mask, etc.) can be found in the AppEEARS Request output bundle (.zip). 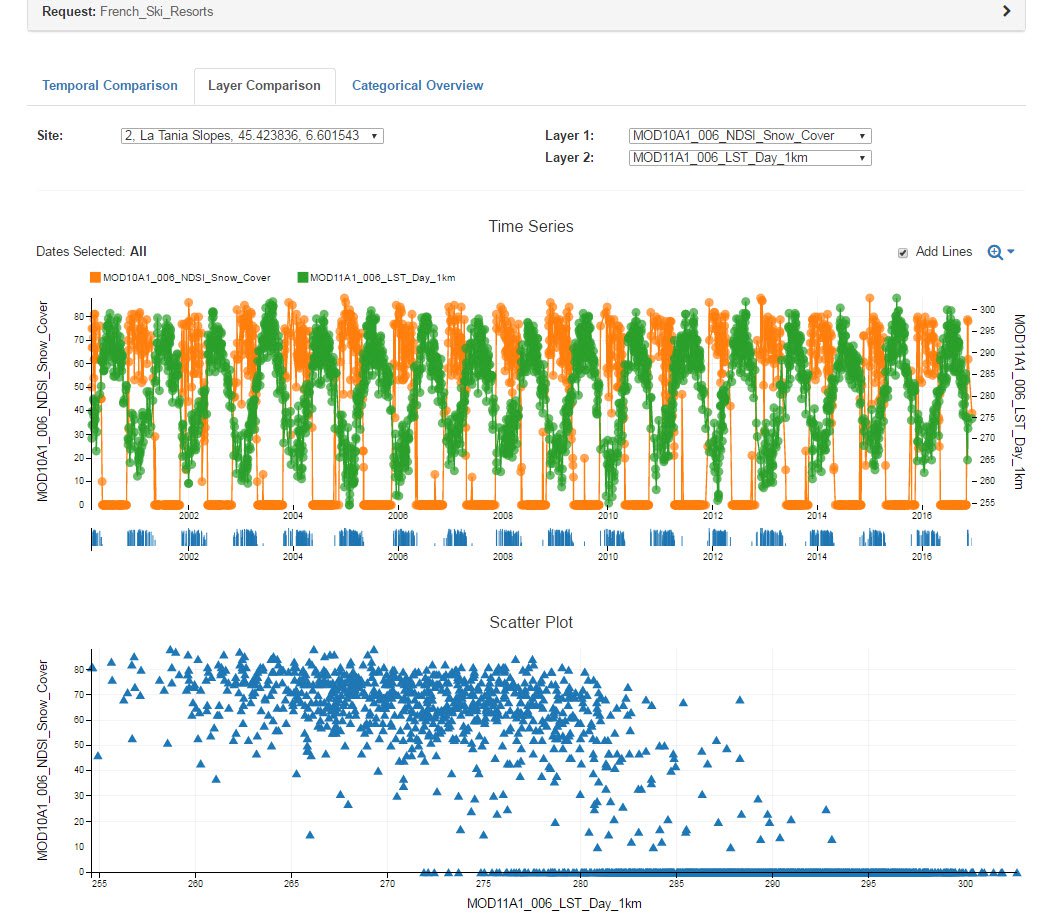 Example of using AppEEARS layer comparison functionality to compare 16 years of daily snow cover data from NSIDC with land surface temperature data from the LP DAAC at La Tania Ski Resort. Above we can visualize the inverse relationship between snow cover and land surface temperature in the Alps using a long time series or in the scatter plot below. *These graphs visualize NDSI Snow Cover (%). Additional discrete data (missing data, land/water mask, etc.) can be found in the AppEEARS Request output bundle (.zip). 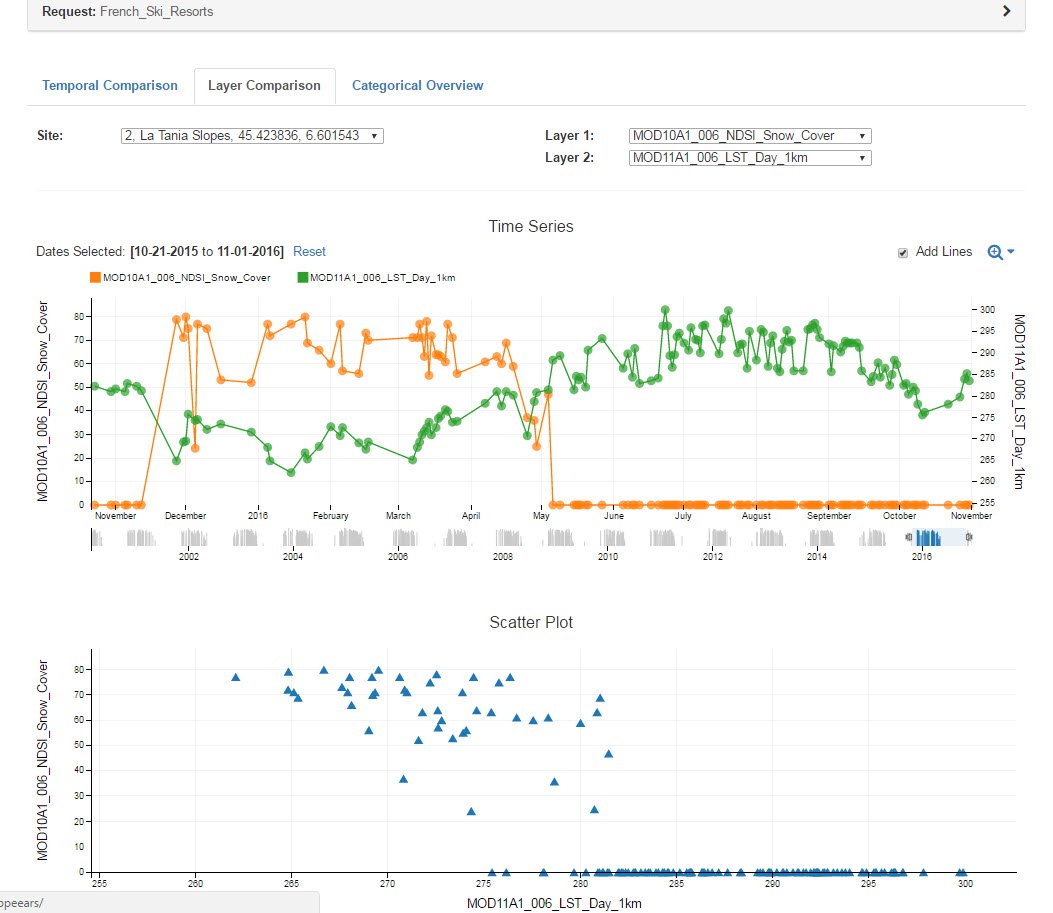 Example of using AppEEARS layer comparison functionality to zoom in on the 2015-2016 ski season in the French Alps. Beginning in late November 2015, we see land surface temperatures drop (green) and snow cover (orange) returns to the area. By late April the temperatures are increasing and consequently snow cover melts, marking the end to another ski season at La Tania. *These graphs visualize NDSI Snow Cover (%). Additional discrete data (missing data, land/water mask, etc.) can be found in the AppEEARS Request output bundle (.zip).