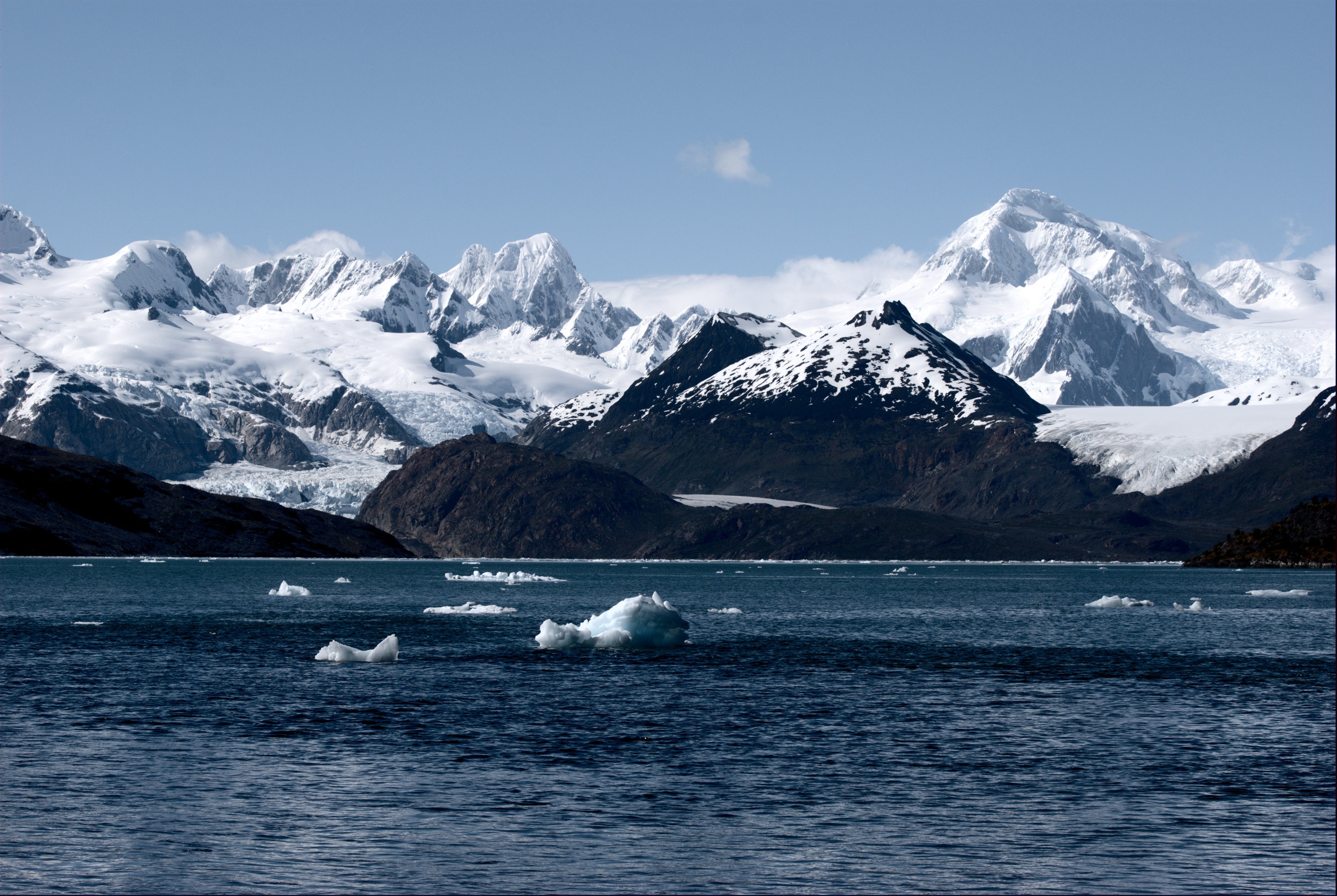 View of the Marinelli Glacier from Ainsworth Bay in southern Chile taken in December 2009.

The Global Land Ice Measurements from Space (GLIMS) project monitors all of the Earth’s glaciers using satellite imagery from sensors such as the Advanced Spaceborne Thermal Emission and reflection Radiometer (ASTER) onboard NASA’s Terra satellite. GLIMS was originally an ASTER Science Team project that is now approaching its 20th anniversary. The project is made up of a network of regional experts from over 60 institutions across the planet who analyze glaciers in their respective regions of expertise. The researchers produce glacier measurements such as digital glacier outlines, center flow lines, snow lines, surface velocity fields, hypsometry data, associated metadata, and literature references. The regional results are archived as a part of the GLIMS Glacier Database (GGDB) at the National Snow and Ice Data Center (NSIDC).

Understanding the causes and effects of global glacier change is of paramount importance in today’s changing climatic regime. Observing glacial changes is also an important aspect of hazards detection and assessment. The GLIMS global glacier inventory can be used to help assess the risks of hazards and natural disasters such as outburst floods, landslides, and ice avalanches.

The GLIMS Glacier Database includes over 275,000 glacier outlines captured between 1850 and 2016. The GLIMS global inventory of glaciers provides researchers with baseline data that can be used for comparison in the future. Imagery collected from Terra ASTER has been a primary source of imagery as the sensor itself can be timed to acquire images of glaciers at seasonally optimal times as well as with ideal gain settings. Over 10,000 ASTER scenes collected between 2005 and 2012 were used to generate many of the glacier outlines in the GLIMS database. These ASTER scenes are now publicly available at no charge due to a change in policy that took effect on April 1, 2016 and are available for download through NASA’s Land Processes Distributed Active Archive Center (LP DAAC).

One example of a glacier that has GLIMS outline records dating back to the 1800s is the Marinelli Glacier, located at the tip of South America in Chilean Patagonia. The Marinelli Glacier has retreated about 15 kilometers in the last hundred or so years. The GLIMS glacier outline database provides insight into how far the glacier has retreated since 1870. In the images below, the pink line represents the extent of the glacier in 1986 and the green line represents the extent in 2007. These two Terra ASTER images show the rapid retreat of the glacier. On September 25, 2001 (left image), much of the region is covered in snow and the Marinelli Glacier is spilling out into Ainsworth Bay. By October 18, 2016 (right image), the glacier had receded from its position in 2001 and much of the region is covered with green vegetation and has less snow covered area. 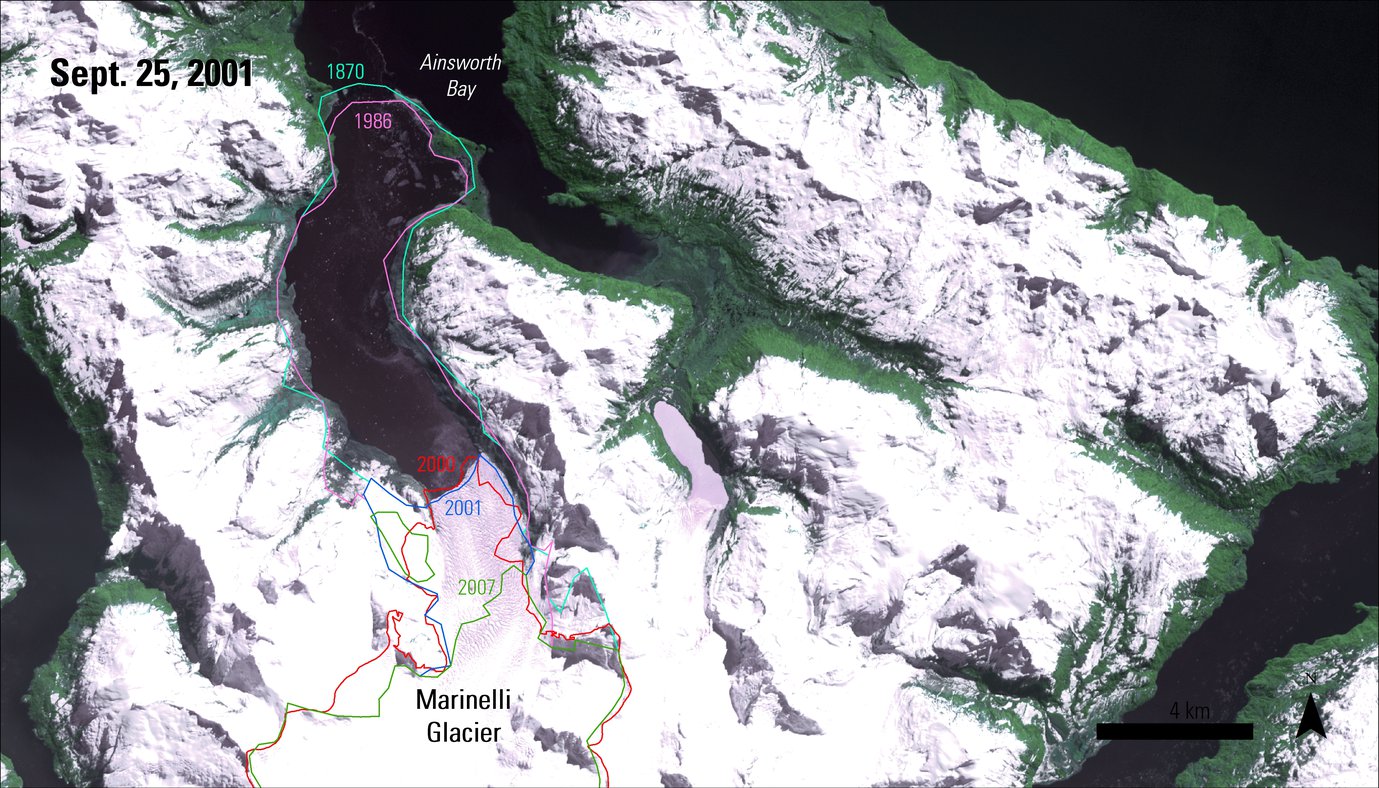 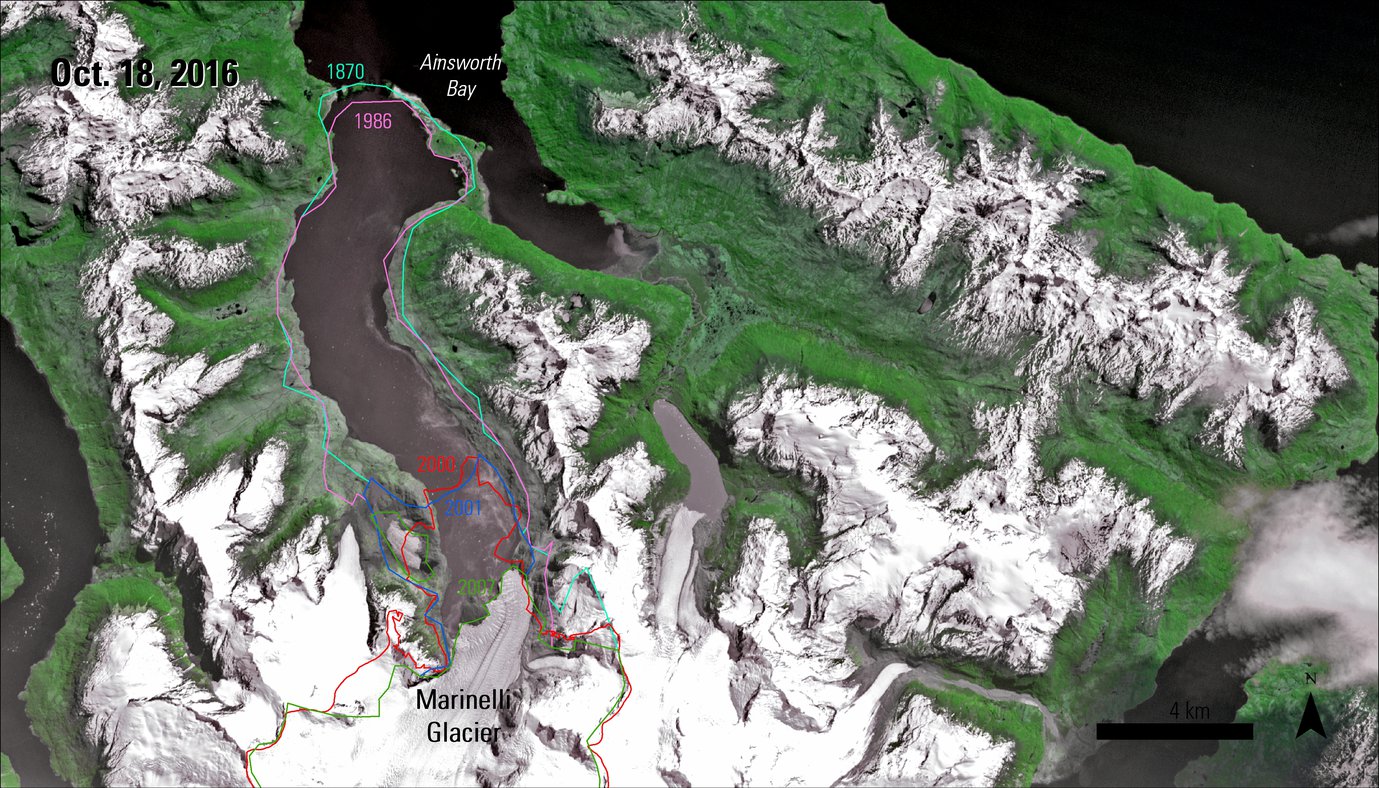 Left Image: Terra ASTER image (AST_L1T) from September 25, 2001, showing the Marinelli Glacier terminating into Ainsworth Bay. Colored lines indicate the extent of the glacier for a given year, provided by the GLIMS glacier outline database.

Right Image: Terra ASTER image (AST_L1T) from October 18, 2016, showing the Marinelli Glacier terminating into Ainsworth Bay. Colored lines indicate the extent of the glacier for a given year, provided by the GLIMS glacier outline database.