During the fall 2020 term of NASA’s DEVELOP National Program, participants used geospatial data and technologies to investigate, analyze, and monitor several issues around the world. Some of the topics explored throughout the term included agriculture, air quality, drought, ecosystems, energy, natural disasters, oceans, urban planning, water resources, and wildfires. Each project completed by a DEVELOP team is conducted in partnership with agencies or organizations local to the study area. Fundamental to the analytical and geospatial component of each of these projects is NASA Earth science remote sensing data. Several of these projects used data distributed by the Land Processes Distributed Active Archive Center, including data collected by the Moderate Resolution Imaging Spectroradiometer (MODIS) sensor aboard NASA’s Terra and Aqua satellites, the Visible Infrared Imaging Radiometer Suit (VIIRS) aboard the Suomi National Polar-Orbiting Partnership (Suomi NPP) satellite, NASA’s Shuttle Radar Topography Mission (SRTM), which flew aboard the space shuttle Endeavour in 2000, Global Ecosystem Dynamics Investigation (GEDI) aboard the International Space Station (ISS) and Ecosystem Spaceborne Thermal Radiometer Experiment on Space Station (ECOSTRESS) also aboard the ISS. 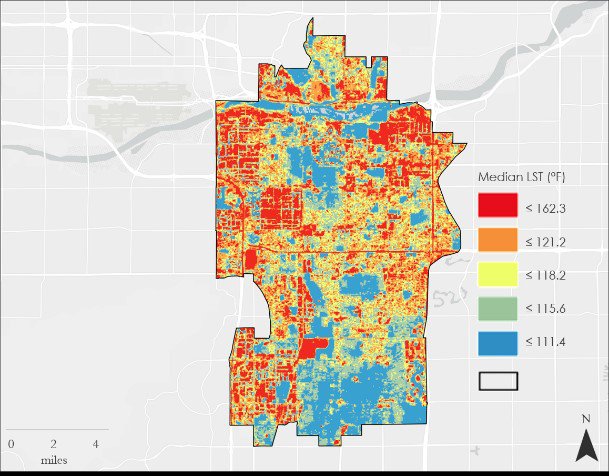 2015-2020 composite map of the median Land Surface Temperature (LST) for all warm season months in Tempe, Arizona derived from Landsat 8 OLI/TIRS. Areas in red illustrate the hottest areas in the city.

All projects conducted in the fall term, as well as in past terms, can be found in the DEVELOP archive.

One of the fall projects used NASA earth observation data to investigate drivers of urban heat. The southwestern United States is known for its semi-arid climate and hot temperatures. In Tempe, Arizona, temperatures are regularly above 37.8° C (100.0° F) during the summer. The area has seen an increase in surface and air temperatures as the city has urbanized and expanded its footprint. This has raised concerns from city and health officials in Tempe because Maricopa County has seen thousands of heat related hospitalizations and hundreds of heat related deaths over the past 15 years. The Tempe Urban Development II team set out to use NASA Earth science remote sensing data to investigate what is driving the temperature increases and identifying locations in the city that would benefit most from targeted heat mitigation and adaptation efforts. The project leveraged data from Aqua Moderate Resolution Imaging Spectroradiometer (MODIS), specifically the Nighttime Land Surface Temperature (LST) (MYD11A1) data product, and composite data derived from Landsat 8 Thermal Infrared Sensor (TIRS) and Landsat 8 Operational Land Imager (OLI) (e.g. NDVI, NDWI, and NDBI). These data, combined with ancillary census, bus stop, and Light Detection and Ranging (lidar) data, were used to make various heat exposure, vulnerability, and priority maps through a principal component analysis. They were also used to produce a geodatabase that can be used by the City of Tempe to make data driven decisions. Through their project, the team identified several areas in Tempe that would benefit most from heat relief mitigation. Identified areas included the Alegre Community, Dwight Park, the Escalante neighborhood, and University Heights. The results of this project were shared with the City of Tempe and may be used for future heat relief implementation strategies. 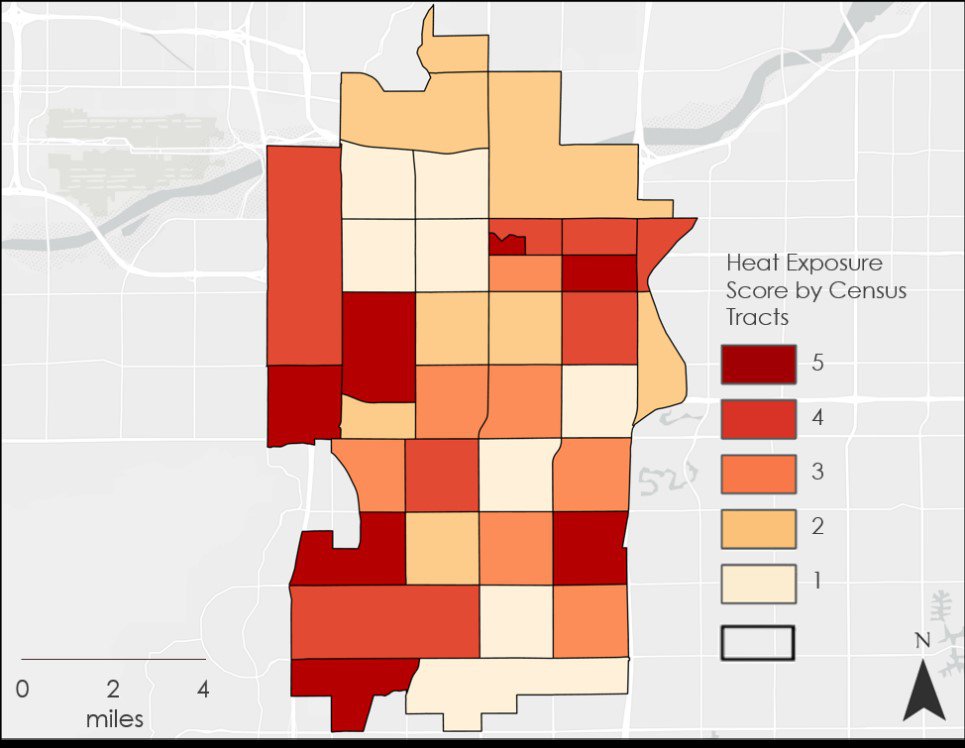