Highlights from the Literature: April to June 2015

Data products from the Land Processes Distributed Active Archive Center (LP DAAC) are used in many different applications. They play an important role in modeling, help to detect changes to the landscape, and are a way to assess ecosystem variables. A few of those applications, published between April and June 2015, are highlighted below. A more exhaustive, albeit not complete, list is available here. 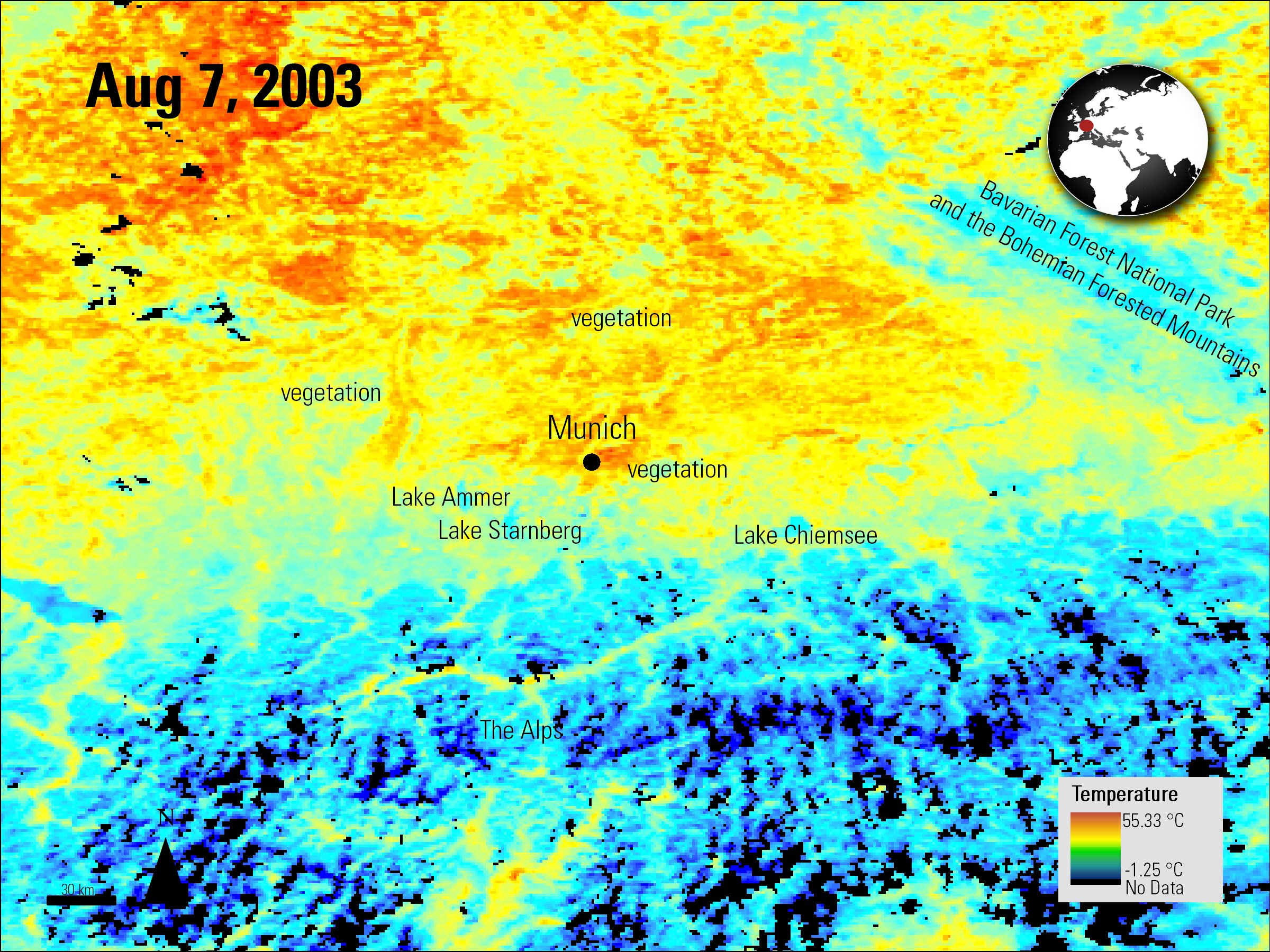 MODIS daytime LST image of Munich, Germany, and the surrounding area during the 2003 heatwave. The blue color indicates colder temperatures. Patches of pale blue areas among the yellow, orange, and red areas indicate locations of vegetation.

Alavipanah and others (2015) use remote sensing data to determine how urban vegetation impacts the Urban Heat Island (UHI) effect on Munich, Germany. UHIs are created when the temperature of an urban area is higher than the temperature of surrounding rural areas. The sun’s energy heats urban surfaces that either retain the energy from the sun, such as pavement, or reflect the energy back into the atmosphere, such as certain types of building roofs and exteriors. These processes can increase the temperature of a city and can intensify temperatures to dangerous levels in larger populated areas during heatwaves, as seen during the 2003 heatwave in Western Europe.

To determine the effect of the UHI’s, the authors use a decade’s worth of daytime land surface temperature data from the Aqua Moderate Resolution Imaging Spectroradiometer (MODIS) sensor (MYD11A2), along with a Land Use/Land Cover (LULC) map. The authors use a seasonal study period of June to August, from 2002 to 2012. The combination of LST data with the LULC map, allows to the authors to determine the urban area to urban vegetation ratio and create a vegetation grid. Using the grid, the authors find a decreasing trend of temperatures over the study period in areas where 70 to 79% of the land cover is vegetation. Overall, the authors conclude that vegetation contributes to regulating temperatures of cities and that LST data can be a useful tool in studying the impact of UHIs. Results from this study are helpful for urban planners working to alleviate the impact of UHI in larger cities. 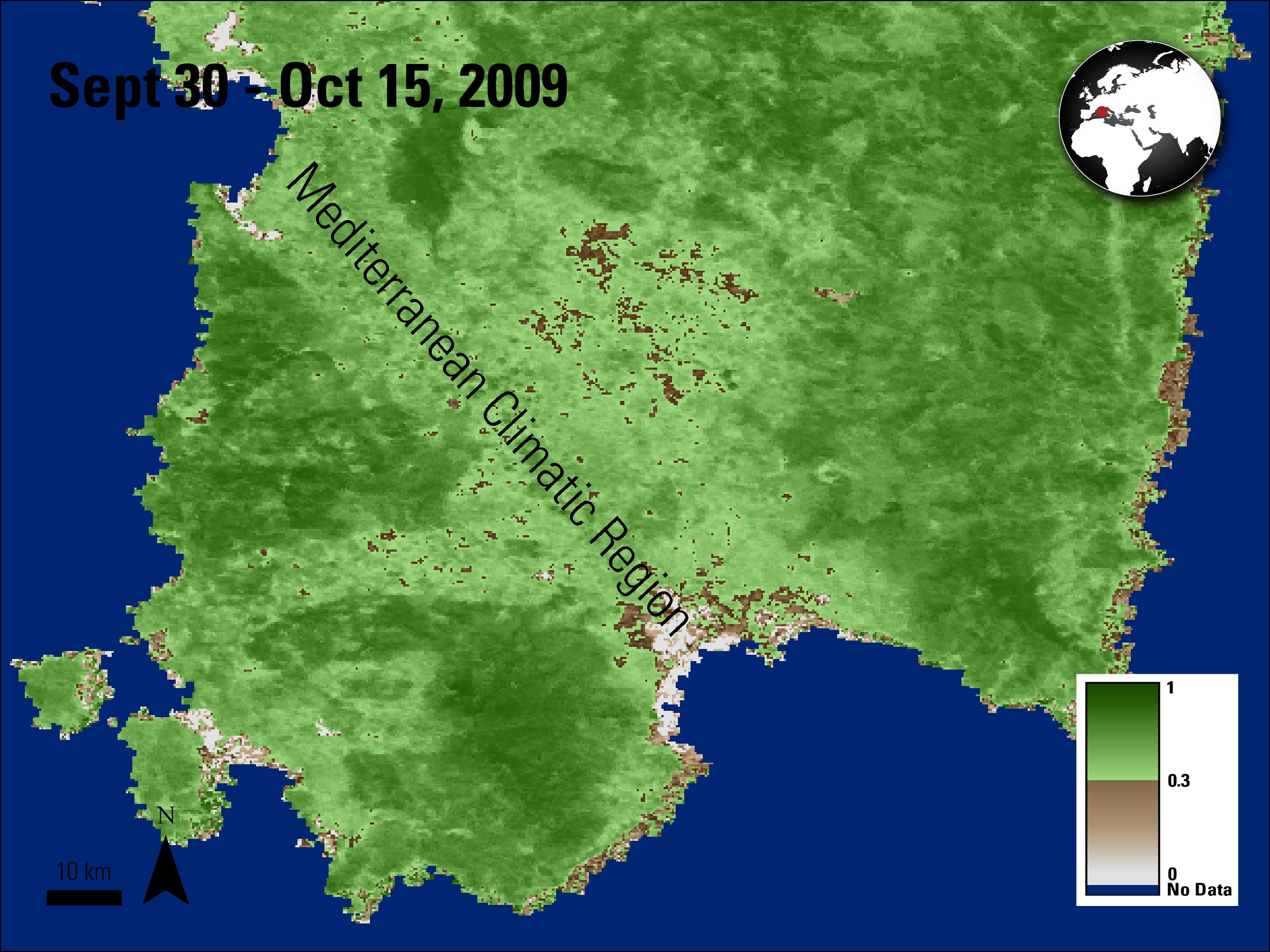 The southern portion of the island of Sardinia is featured in this composite MOD13Q1 image from September 30 to October 15, which includes the date of October 1, 2009. The authors determined that the lighter green area, part of the Mediterranean Climatic Region, has one of the highest risks of future wildfires in the area.

Bajocco and others (2015) use Terra’s Moderate Resolution Imaging Spectroradiometer (MODIS) vegetation indices data (MOD13Q1) from 2000 to 2012 to develop a fire fuel vegetation map of Sardinia, Italy. This map can be used to aid in identifying and classifying the risk of fire occurring in an area. Data from April 23 and October 1 of each year are used, as these two dates correspond with the highest occurrence of wildfires in Sardinia. The authors then average the Normalized Difference Vegetation Index (NDVI) values of each 16-day composite, creating a mean NDVI profile for the seasonal variations. Next they apply an analysis to create phenological fuel classes (PFCs), identifying fire vulnerability in areas with similar types of vegetation and in similar vegetated states, based on the NDVI data. Using the Coordination of Information on the Environment (CORINE) Land Cover data, a climatic map of the region, and local wildfire data, the authors were able to identify the types of land cover that are associated with different PFCs across several regions. Based on this data, the authors are able to identify the areas that were more susceptible to wildfires.

The authors find that arable lands in the Mediterranean climate have the highest risk of fire. They believe this is due to an increased presence of humans in the area, as well as PFCs in the area that dry quickly and can easily burn after a short period of dry weather. The authors find naturally occurring land cover in areas, such as forest and shrubland, have the lowest fire risk. Typically these areas contain vegetation that takes longer to dry completely, and thus it has a lesser chance of igniting. Based on their research, the authors found that the MODIS NDVI time-series provides a suitable basis for creating fire fuel maps and can be used in future fire prediction models. 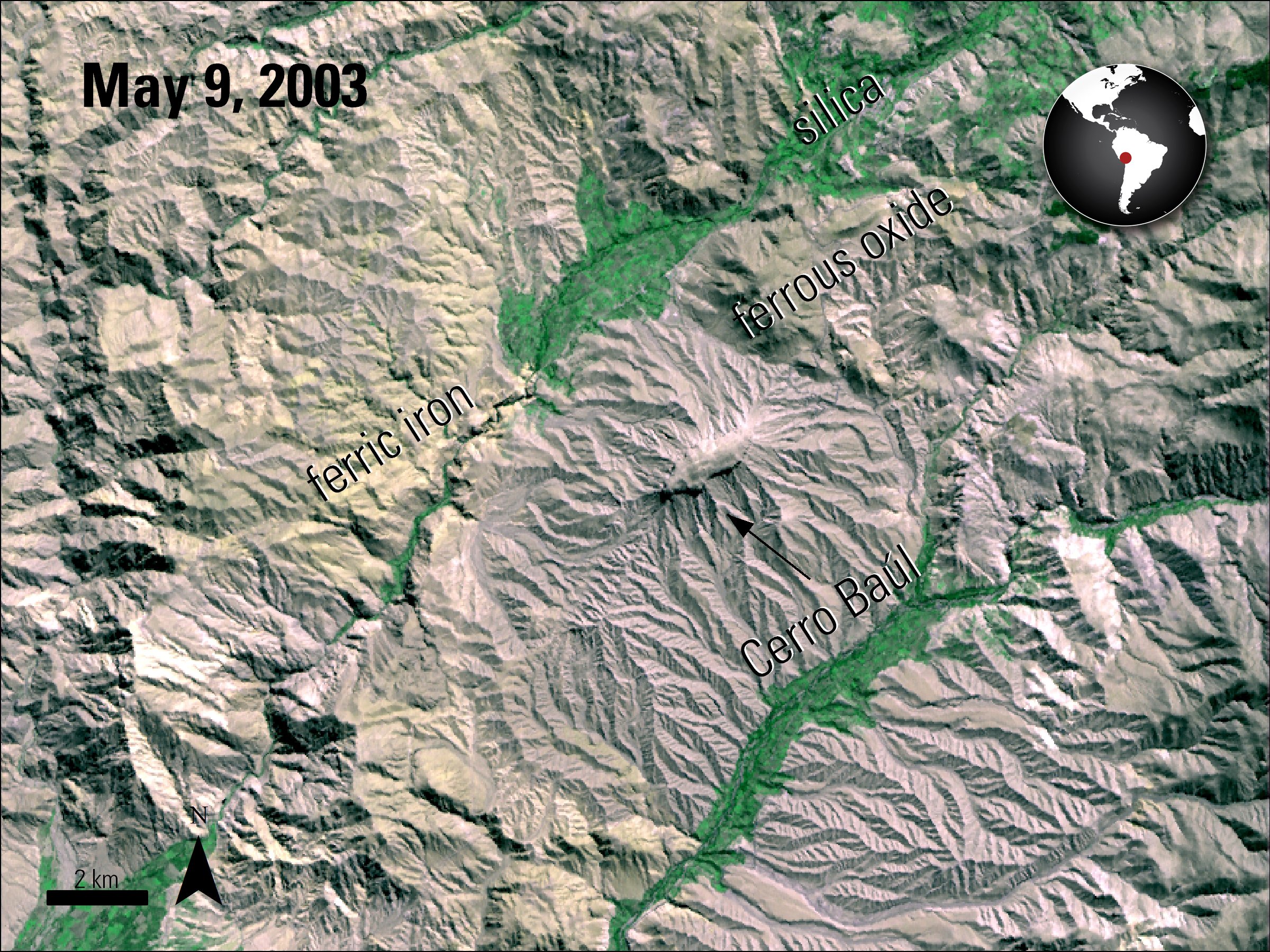 A color infrared ASTER L1B image of the Cerro Baúl archeological site in Peru and the surrounding area. Silica, ferric iron, are ferrous oxide are three of the rock types in the area identified by the author.

Vining (2015) uses data from Terra’s Advanced Spaceborne Thermal Emission and Reflectance Radiometer (ASTER) sensor to examine the use of remote sensing in archeological pursuits. For this study, the author uses ASTER L1B imagery and various band ratios and calculations to map geological materials around the archaeological site of Cerro Baúl in Moquegua, Peru. ASTER data is used specifically because of its 15, 30, and 90 meter spatial resolution. This area was chosen because both the populations of Wari colonists from the Ayacucho region of Peru and the Tiwanaku colonists from highland Bolivia previously lived in this location at the same time. By using ASTER data, the author is able to better understand the social interactions between the two groups and the role the social structure of the societies played in accessing and obtaining resources.

Two AST_L1B scenes from May 9, 2003 are used to identify various types of rocks and minerals in the area by using different calculations with the bands. Certain band calculations cause different minerals to reflect at a brighter value, which makes it possible to identify where those minerals are detected. Using image classification and geospatial analysis, raw materials found in archaeological residences are able to be tied to their source materials. The author was able to study the networks and strategies for obtaining local resources in the community by using the data in two separate models. The author concludes that remote sensing should take on an increasing role in understanding archaeological behaviors. He also believes that multispectral remote sensing, like ASTER, plays a vital role in mapping environmental resources on a spatial scale that is applicable for analyzing an archaeological site.