Highlights from the Literature: January to March 2016

Data products from the Land Processes (LP) Distributed Active Archive Center (DAAC) are used in numerous applications. They play an important role in modeling, in detecting changes to the landscape, in assessing ecosystem variables, and in many other research endeavors. A few articles describing application of LP DAAC data products, published between January and March 2016, are highlighted below. A more exhaustive, albeit not complete, list can be accessed via the LP DAAC Publications Web Page. 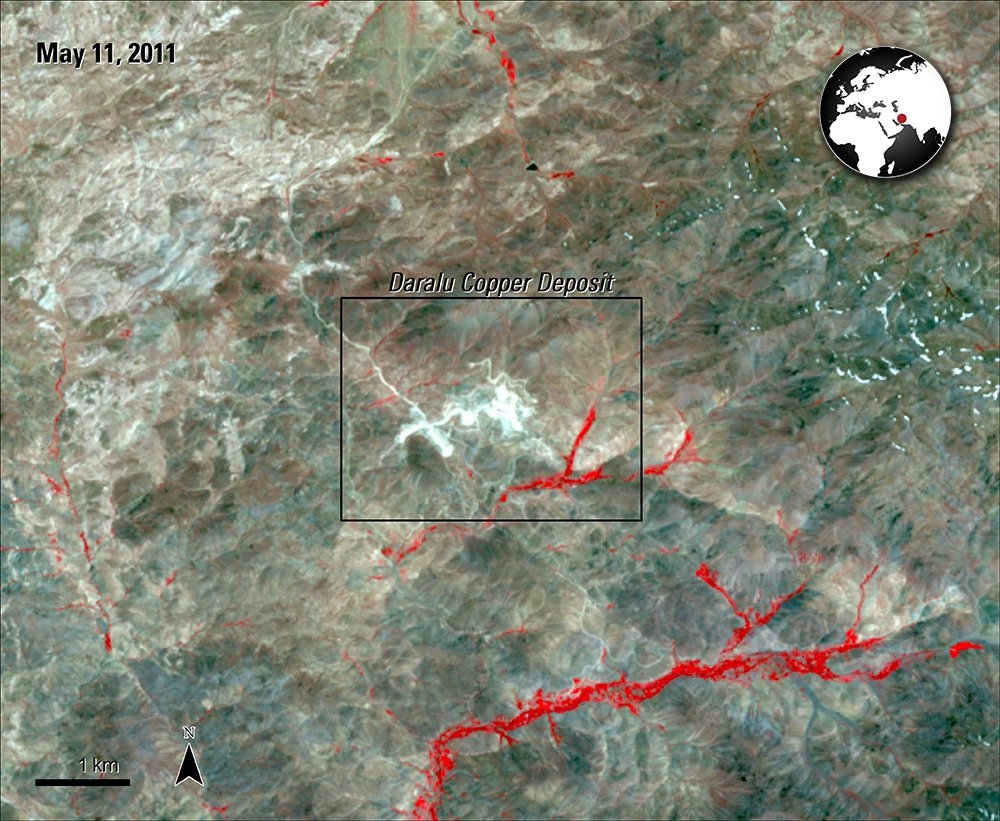 In recent years, mineral prospecting has incorporated the use of remote sensing data as a preliminary step when assessing a location. This paper describes several techniques applied to remote sensing imagery to highlight mineral content of soils and identify faults at the Daralu copper deposit in southeastern Iran. Data used in this study include Advanced Spaceborne Thermal Emission and Reflection Radiometer (ASTER) and Landsat Enhanced Thematic Mapper Plus (ETM+) images. Sojdehee and others (2016) use specific ASTER band ratios and band combinations to classify minerals and identify faults based on spectral enhancements. Classification using ASTER images yielded better results than similar analyses of other remote sensing data; in-field and lab measurements support the paper's findings, as do the results of a cited paper from 1970. The authors conclude that the discussed methods of analyzing remote sensing imagery are useful to identify regions of hydrothermal alterations (introductions of minerals into faults within rock formations via extremely hot water) related to copper mineralization. 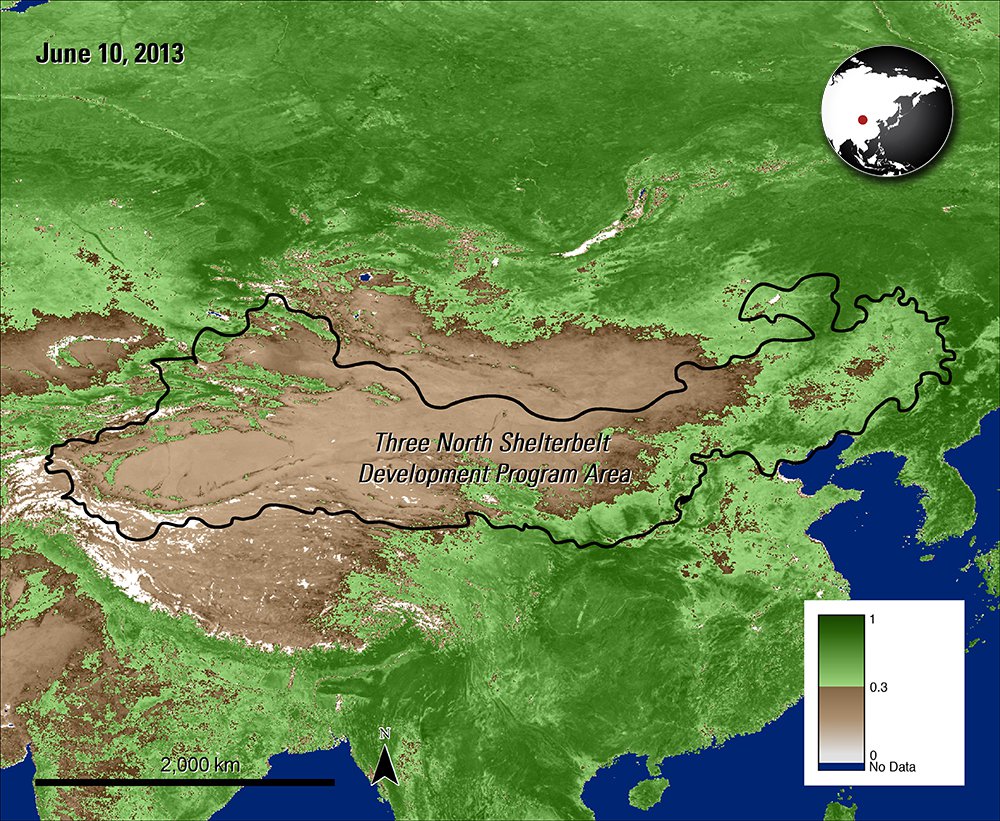 A Terra MODIS NDVI image of the Three North region (bounded in black) in northern China from June 10, 2013.

The archive of Moderate Resolution Imaging Spectroradiometer (MODIS) data allows scientists to study long-term trends. Zhang and others (2016) use Normalized Difference Vegetation Index (NDVI) measurements to assess the effectiveness of the “Three North” Shelterbelt Development Program (TNSDP), an ecological restoration program in northern China. The TNSDP, which began in 1978, focuses on planting protective forests in arid and semi-arid areas of the northern portion of China. It is the largest afforestation program in the world, covering 42.2% of China’s total land area. The TNSDP and other afforestation programs were instituted to combat desertification, sandstorms, soil erosion, and land degradation in the dry northern regions of China. The authors apply several growth trend analyses to the calculated mean NDVI for the growing seasons (May to September) of each year from 1978 to 2013. They also use Global Inventory Modeling and Mapping Studies (GIMMS, 1982 – 2006), GIMMS third generation (GIMMS 3g, 1982 – 2012), and MODIS (MOD13C1, 2000 – 2013) data to calculate mean NDVI. Results of the study show an increase of NDVI over the 30-year study period, which is attributed to multiple afforestation programs and continued growth of planted trees. 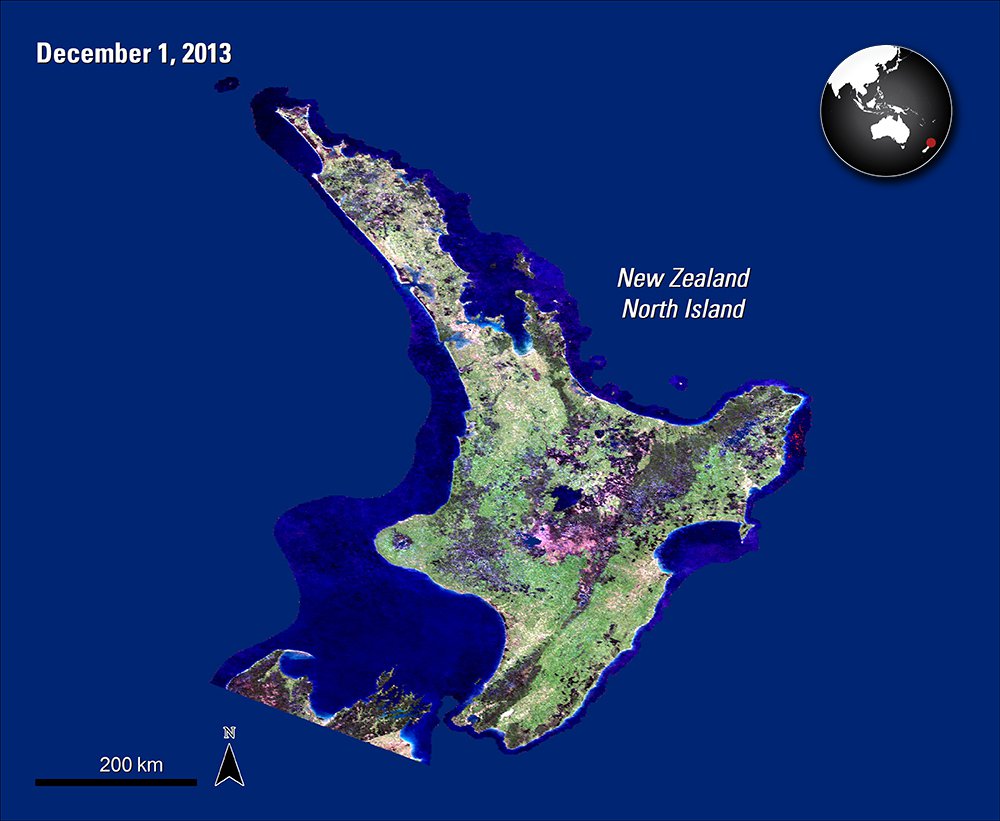 A composite Terra MODIS BRDF image of the North Island in New Zealand from December 1, 2013.

MODIS data are often used to study forest disturbance. De Beurs and others (2016) examine a method of analyzing forest disturbance and extended the method to the forests and grasslands of the North Island of New Zealand. Data products used for this study include 8-day MODIS Nadir Bidirectional Reflectance Distribution Function (BRDF)-adjusted reflectance (NBAR) 500m resolution (MCD43A4) from 2000 – 2013 and Landsat data from 1999 – 2012. The authors used the LP DAAC MODIS Reprojection Tool to post-process their MODIS data. The results of the study indicate that the method of analyzing disturbance was effective for both forests and grasslands. Additionally, the adapted grassland method had comparable or higher accuracy than the analyses of the forest disturbance.