Highlights from the Literature: October to December 2017

Data products distributed by the Land Processes (LP) Distributed Active Archive Center (DAAC) are used in many different applications. They play an important role in modeling, helping to detect changes to the landscape, and assessing ecosystem variables, to name a few. Three of those applications, published between October and December 2017, are highlighted below. A more comprehensive list can be accessed via the LP DAAC Publications webpage. 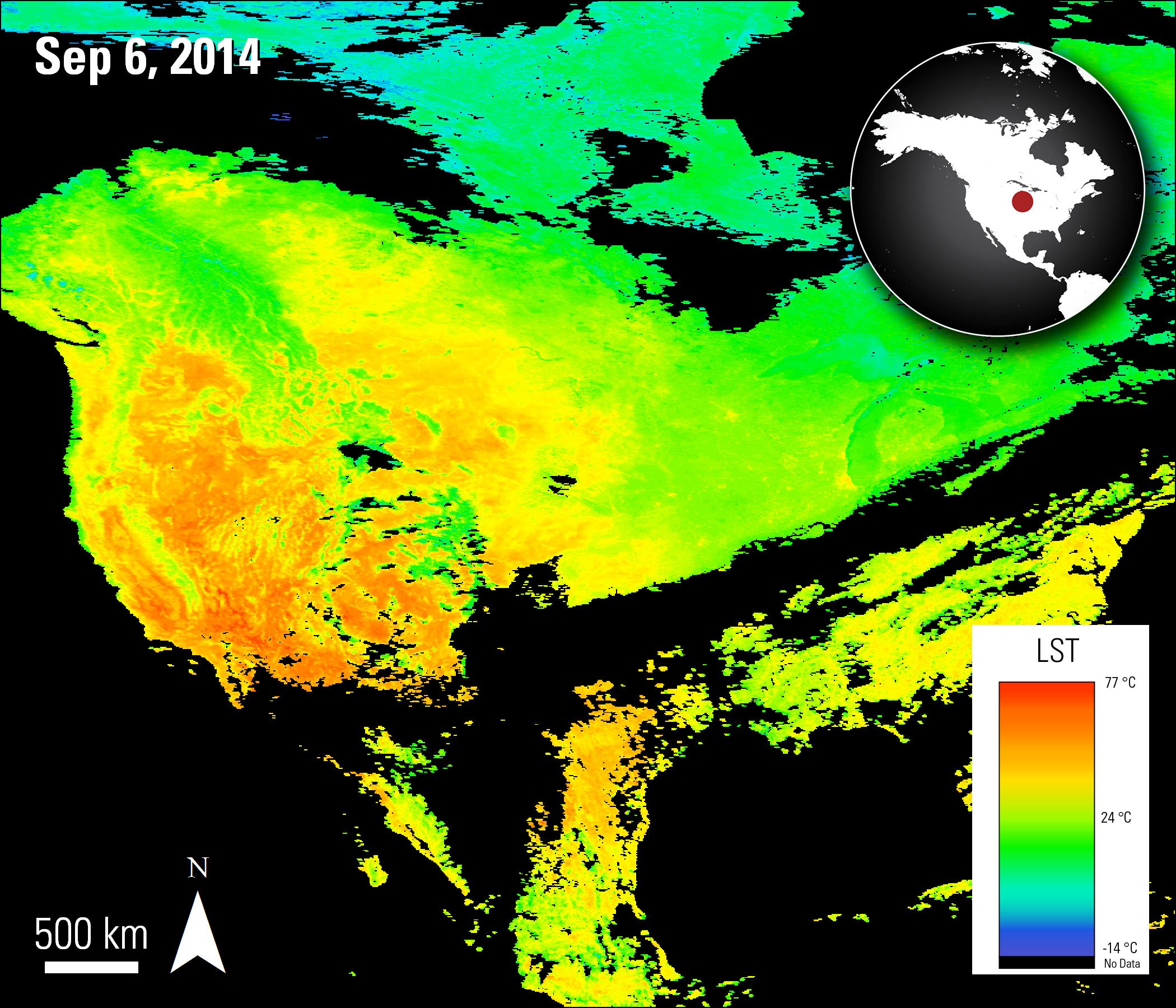 A view of the study area from Hain and Anderson (2017) is shown in this MODIS Daily Land Surface Temperature image. The black in this image represents no data, which often is caused by clouds.

The Atmosphere Land Exchange Inverse (ALEXI) model is a diagnostic land-surface modeling system that uses changes in morning Land Surface Temperature (LST) as a factor in observing surface energy balance. ALEXI currently relies on regional geostationary satellites like the Geostationary Operational Environmental Satellite (GOES) to estimate these changes in LST. This is problematic due to the limited coverage of these satellites (60°N to 60°S), differences in thermal retrieval algorithms used in the satellites, and changes between spectral, temporal, and spatial characteristics of each satellite. Hain and Anderson (2017) use daily daytime and nighttime observations from the Aqua Moderate Resolution Imaging Spectroradiometer (MODIS) sensor (MYD11C1) to overcome these challenges. The study focused on the conterminous United States (CONUS) for 2007 to 2015. The data are resampled to 8-kilometer (km) resolution, filtered for low-quality LST values using Quality Control (QC) flags, and masked for pixels outside of the GOES geographic range. The authors use the MODIS data and additional sources to estimate the mid-morning change in LST using a tree regression data-mining technique. They find that the MODIS-predicted change in LST values agrees with the GOES-observed changes in LST. They believe the methodology­ in the paper can be used with other methods to estimate changes in LST when more than two observations per day are needed. 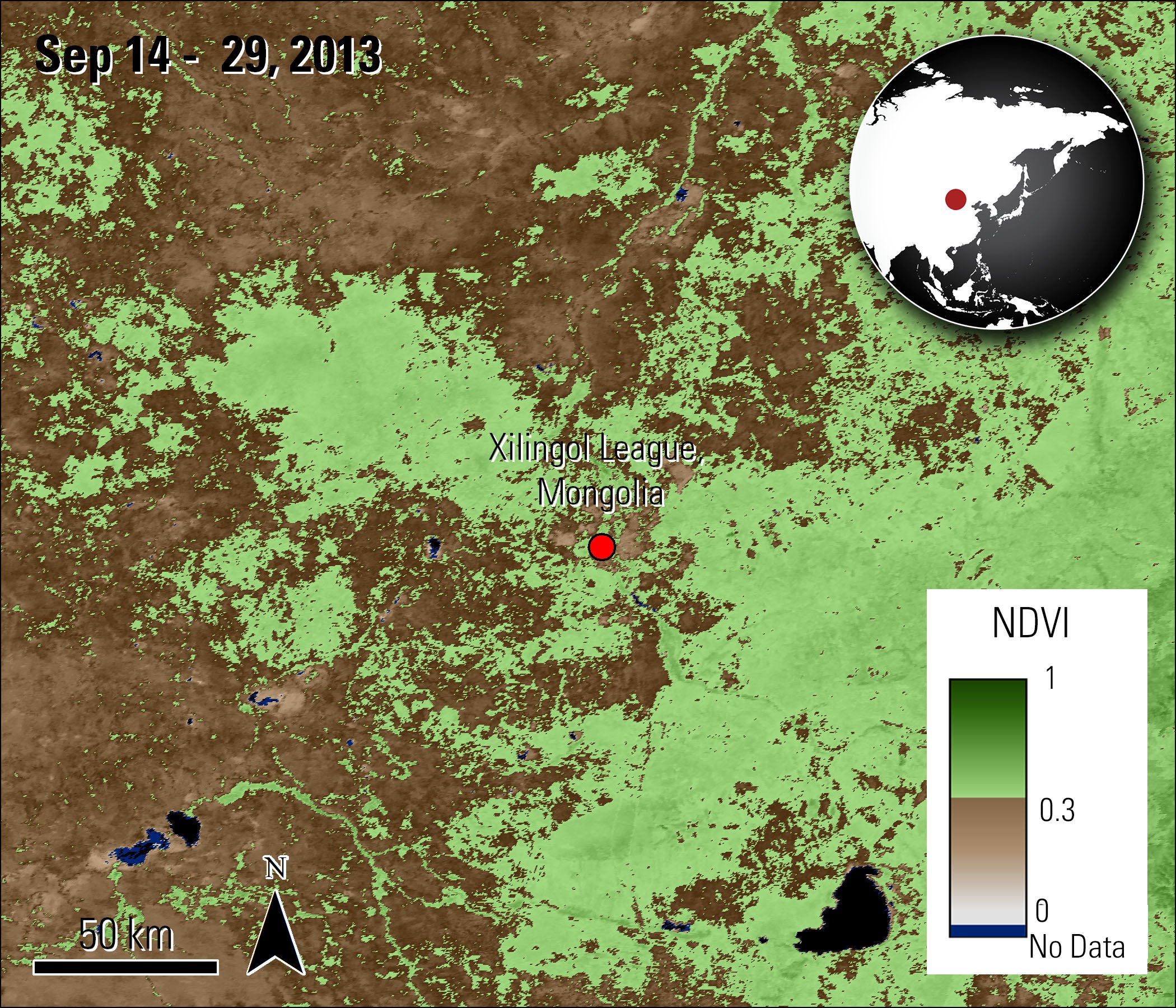 The Xilingol League area of Inner Mongolia is shown in this 16-day, Terra MODIS NDVI image. The authors are able to estimate green aboveground biomass of the area using this data.

Xue and others (2017) use Normalized Difference Vegetation Index (NDVI) data derived from Terra MODIS observations to estimate green aboveground biomass of the desert steppe, a type of biome, in the Xilingol League of Inner Mongolia during September 2013. These estimates help to determine sustainable uses of grassland resources in the area. This paper describes how the authors establish a spatial upscaling algorithm to estimate the vegetation in an area with low vegetation cover and high spatial heterogeneity, meaning the vegetation looks similar in composition, productivity, and diversity. They upscale the 250 meter (m) resolution NDVI data from the Terra MODIS Vegetation Indices product (MOD13Q1) to resample the data to match the 1,000 m resolution Vegetation Indices product (MOD13A2). Samples of grassland cover are then extracted from both data products using systemic-random sampling. A regression analysis is then conducted between the products. During this analysis the authors found the linear relationship was in good agreement. The results of the study confirm that the algorithm used was beneficial in estimating aboveground biomass in the area. The authors believe this algorithm could also be used with other remotely sensed data with different spatial and temporal resolutions. In the future, they believe this algorithm could also be used to estimate other vegetation parameters including leaf area index and vegetation cover in similar biomes over large scales. 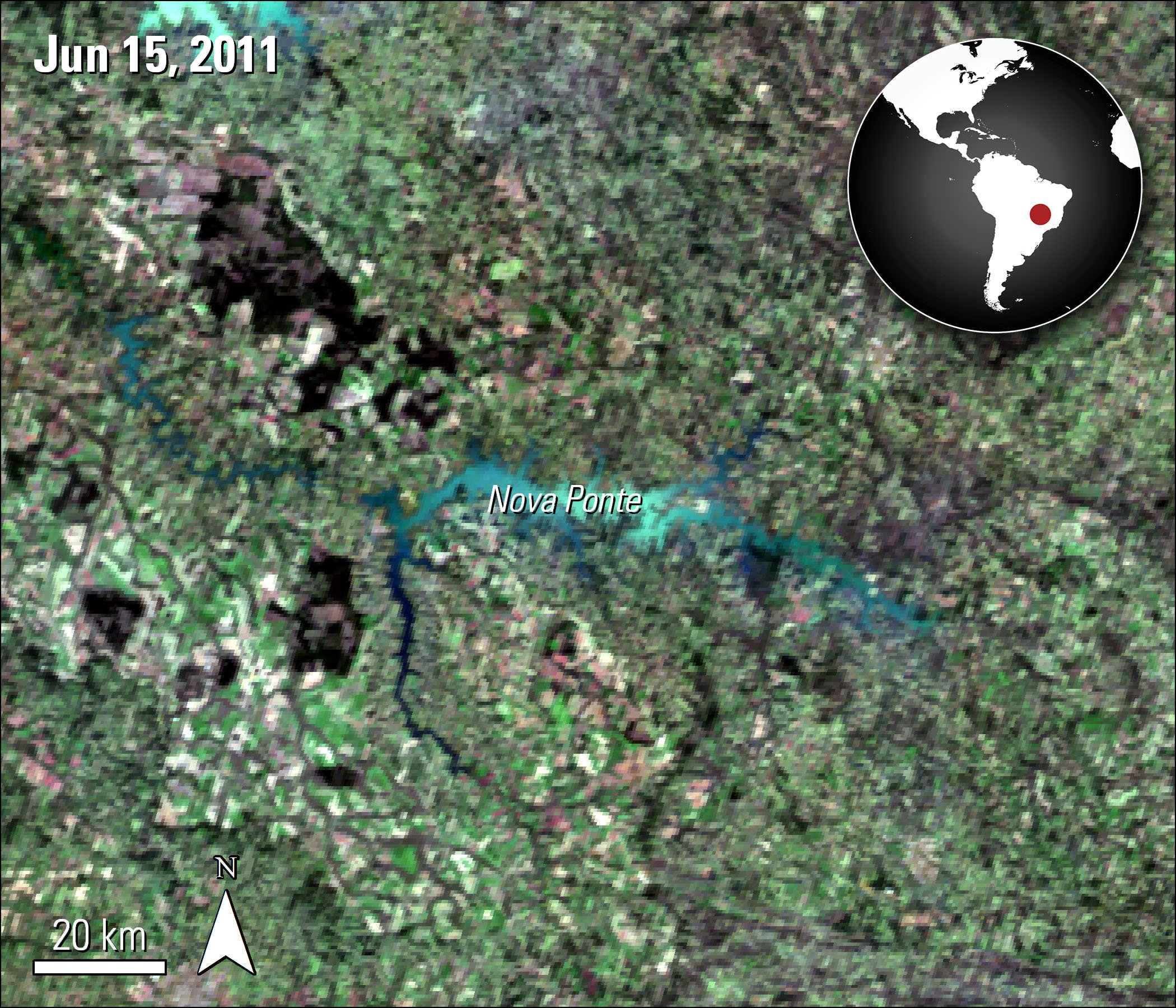 A Terra/Aqua combined MODIS BRDF image of the Nova Ponte reservoir in Brazil. This was one of the case study locations researched by the authors.

In this paper Khandelwal and others (2017) describe a new approach to map the extent and temporal variation in water levels for 94 reservoirs around the world between 2000 and 2015. Their method maps the water bodies at 8-day intervals, using Combined Terra and Aqua MODIS 16-Day Bidirectional Reflectance Distribution Function (BRDF) (MCD43A4), Terra MODIS 8-day Surface Reflectance (MOD09A1), and Terra MODIS Land-Water Mask data (MOD44W). The authors conduct a global supervised classification of the data to create global classification maps. The maps are then merged into a combined global classification map and filtered using quality data and cloud and snow masks. Finally, the authors correct for mislabeled water areas using elevation information. This process ultimately creates a final global classification map. The data are evaluated by comparing the reservoirs with existing satellite altimetry observations from the U.S. Department of Agriculture, the Laboratoire d'Etudes en Géophysique et Océanographies Spatiales in France, the Database for Hydrological Time Series of Inland Waters, and available in-situ observations. The authors also create Landsat-based reference classification maps for some of the reservoirs. The authors presented five case studies for further validation: Lake Mead (USA), Lake Nasser (Egypt), Kremenshugskoye (Ukraine), Nova Ponte (Brazil), shown in the image, and Williston Lake (Canada). The authors find a high correlation with surface area between results from their method and altimetry measurements. In the five case studies, the linear correlation improved using the proposed method compared to previous similar classification methods. In the case of Nova Ponte, Brazil, the linear correlation increased from 0.08 in previous studies to 0.88. The results from this study improve upon previous research by providing water classification results more frequently and providing the ability to extract surface water area for water bodies of interest. The authors find despite MODIS’ more coarse resolution, the method performed well compared to Landsat-based classification maps. The authors note that the method described in the paper could be used with finer resolution data as well, as long as there are copious observations of the water bodies. The automation of this method allows the authors to rapidly update information about water bodies as new data are available. The authors plan to update their results with the now available MODIS Version 6 data and plan to extend results beyond August 2015.