Highlights from the Literature: October to December 2019

Data products distributed by the Land Processes Distributed Active Archive Center (LP DAAC) are used in many different Earth Science applications. LP DAAC products play an important role in modeling, detecting changes to the landscape, and assessing ecosystem variables, to name a few. Three of those applications, published between October and December 2019, are highlighted below. A more comprehensive list is available on the LP DAAC Publications webpage. 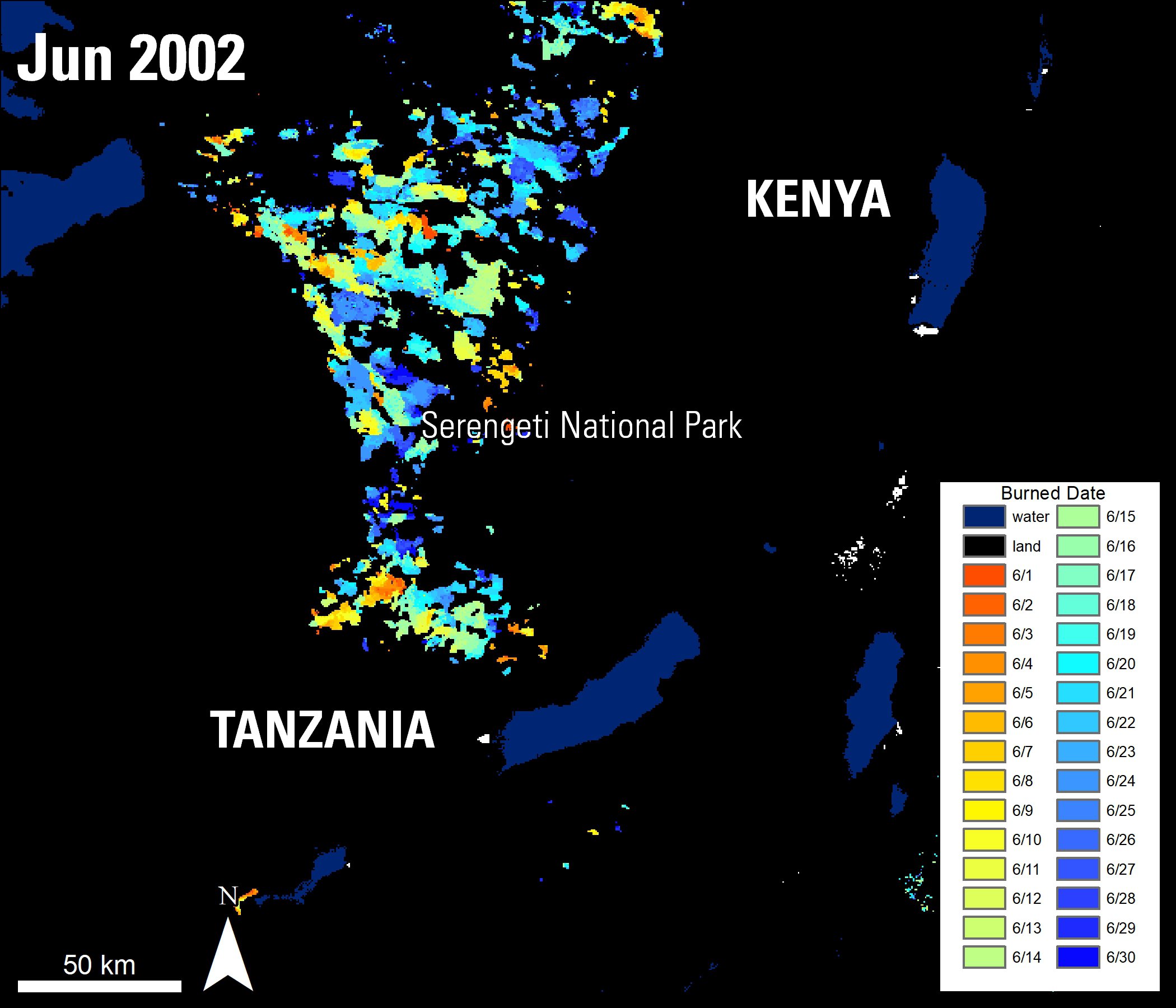 An image of combined Terra and Aqua MODIS Version 6 Burned Area Product over the Serengeti-Mara ecosystem from June 1–30, 2002.

Probert and others (2019) rely on a series of data to assess spatial and temporal characteristics of fire regimes over a consortium of National Parks and Reserves that transects between Tanzania and Kenya, Africa from 2001-2014. The authors use remote sensing data distributed by the LP DAAC, including Terra Advanced Spaceborne Thermal Emission and Reflection Radiometer (ASTER) Global Digital Elevation Model (GDEM) (ASTGTM) and the Combined Moderate Resolution Imaging Spectroradiometer (MODIS) Burned Area (MCD45A1) products. In addition, the authors use the Combined MODIS Active Fire (MCD14ML) product, which is distributed by the University of Maryland. Ancillary data, including rainfall data, soil data, in-situ grass height data, and migratory patterns of wildebeest are also used. The ASTER data are used to extract the elevation and slope of each fire in the study area. The authors combine the MODIS active fire and burned area data to observe individual fires, their locations, and associated fire characteristics. A comprehensive pattern of fire regimes across the Serengeti-Mara ecosystem was generated based on MODIS data products over the span of the study period and overlaid with the area’s statistical environmental data. The study revealed a decline in the total burned area and number of fires. The authors attribute this decline in fire to human activities, such as increase in livestock populations, including an increase in grazing activities by the wildebeest, and land management approaches. 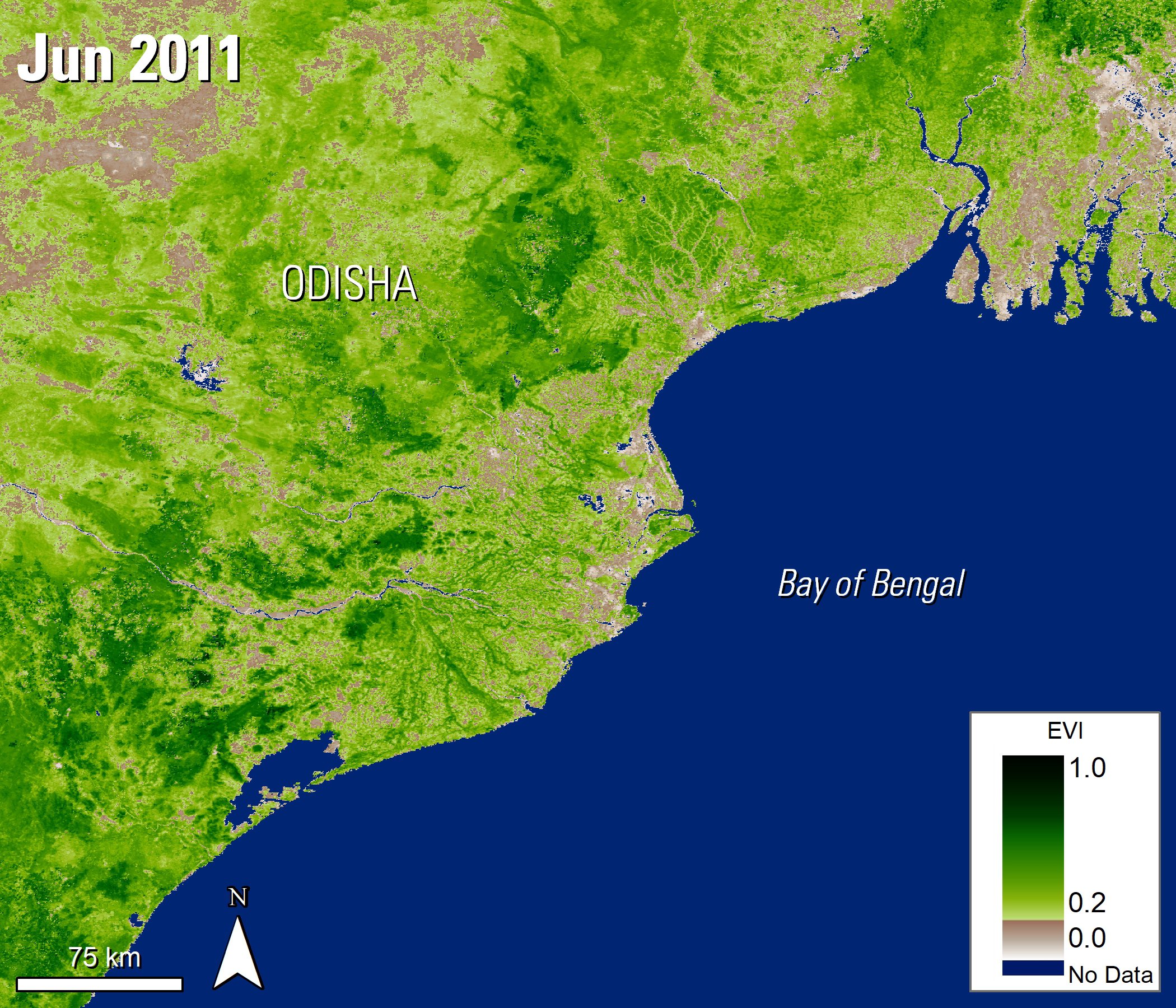 An image of Terra MODIS Enhanced Vegetation Index data over Odisha, India, shorelines during the wet season of rice production.

India is one of the leading rice producers and consumers in the world. However, one coastal region, Odisha, India, produces rice at a comparatively lower rate than other regions due to soil salinity issues. Salinity is a natural occurring phenomenon near Odisha due to its proximity to the shoreline, where flooding is a common occurrence. Depending on the concentration level, soil salinity can either benefit or harm rice production. The window frame for rice production is limited from June to October, since rain lowers the level of salt concentration in the soil. From November to February, known as the dry season, rice production is severely hindered due to the high level of salt concentration. Remediations can be expensive for local municipalities; therefore, a better understanding of the spatial and temporal relationship of soil salinity is needed. In this study, Paliwal and others (2019) rely on Moderate Resolution Imaging Spectroradiometer (MODIS) Enhanced Vegetation Index (EVI) data from Terra MODIS and Aqua MODIS (MOD13Q1 and MYD13Q1) to detect soil salinity in rice crops. The Savitzky-Golay filter, which minimizes noise and outliers, was applied to the MODIS EVI time series data from 2011–2015. Additionally, TIMESAT software was used to extract phenological parameters. Field measurements of soils and salinity were collocated with EVI values for different seasons. The study found a strong negative correlation between EVI and soil salinity. This is significant since it highlights a promising indicator of soil salinity and intensity in regions where soil salinity is a concern to rice production. According to the authors, the approach followed in the study is potentially useful for regional scale salinity mapping studies. 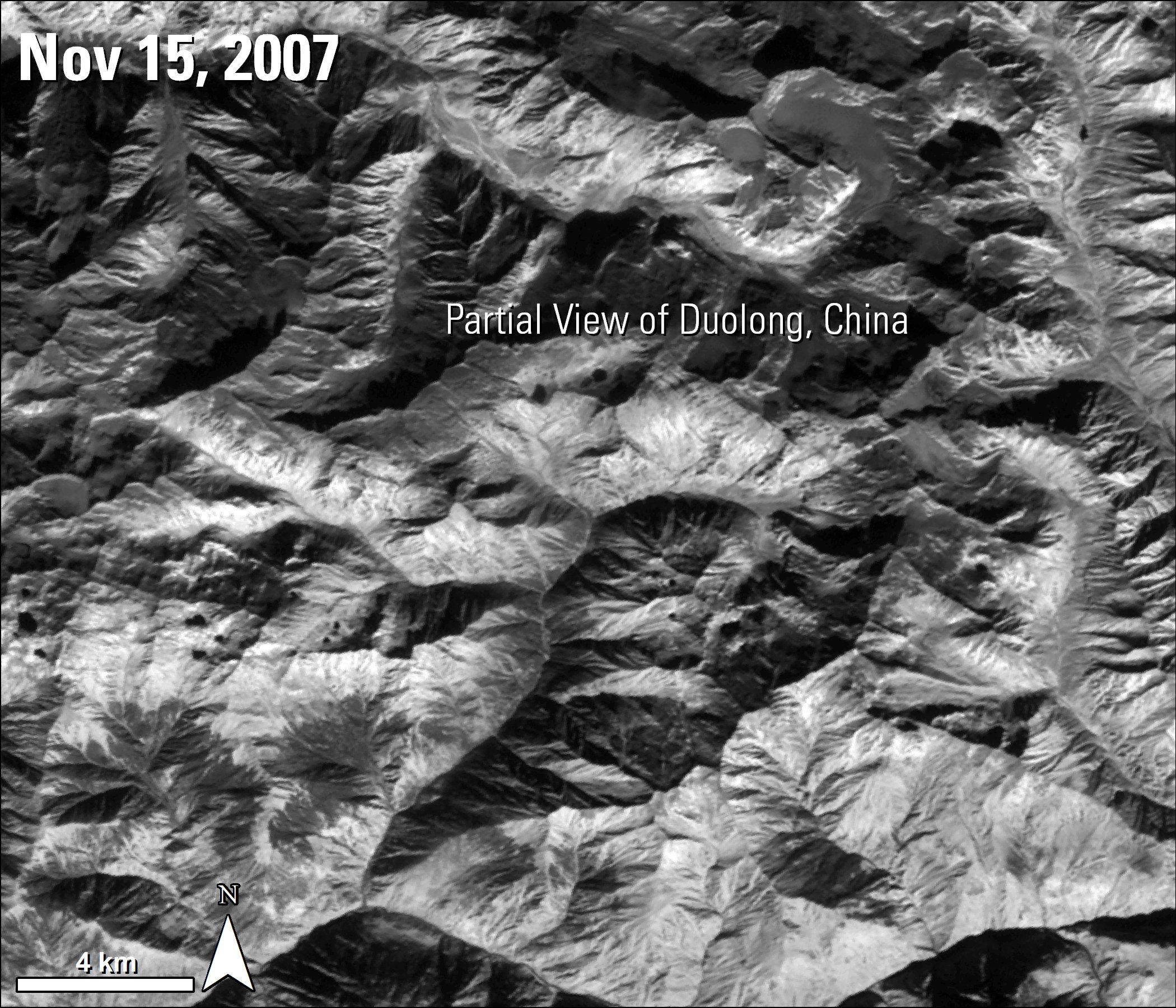 A view of the study area from Hu and others (2019) using data from the Terra ASTER satellite sensor. This area is known for its rich mineral deposits. Minerals include muscovite, kaolinite, and others.