Highlights from the Literature: October to December 2020

Data products distributed by the Land Processes Distributed Active Archive Center (LP DAAC) are used in many different Earth Science applications. LP DAAC data products play an important role in modeling, detecting changes to the landscape, and assessing ecosystem variables, to name a few. Three of those applications, published between October and December 2020, are highlighted below. A more comprehensive list is available on the LP DAAC Publications web page.

Image and caption provided by the authors, Babker and others (2020).

In this study Babker and others (2020) set out to use meteorological, hydrological, and land cover data to comprehend the complex eco-hydrological processes in the Baraka River Basin in Sudan. With this knowledge they built a floodwater harvesting (FWH) site suitability map. The authors use two data products from NASA’s LP DAAC. One of these products is the Terra Advanced Spaceborne Thermal Emission and Reflection Radiometer (ASTER) Global Digital Elevation Model data (ASTGTM) to generate slope and drainage networks, and to define the basin boundary. They other product they use is the Combined Terra and Aqua Moderate Resolution Imaging Spectroradiometer (MODIS) yearly Land Cover data (MCD12Q1) to detect long-term annual land cover change over the study area from 2001–2018. The MODIS Land Cover data accompanies a land cover data product released by the European Space Agency in 2010. These data are used in conjunction with in-situ and estimated data used to measure rainfall and soil. Weight Linear Combination and the Boolean GIS techniques are used to integrate and analyze thematic layers for the FWH site suitability map. The authors found a significant reduction of grassland and barred areas, which they believe is due to a significant expansion of cropland and open shrubland in the delta. They believe that 41 percent of the area within their designated effective distance from the river has good potential for floodwater harvesting during the rainfall season from June to September. The authors state that their approach can be used in other study areas with a similar river basin. 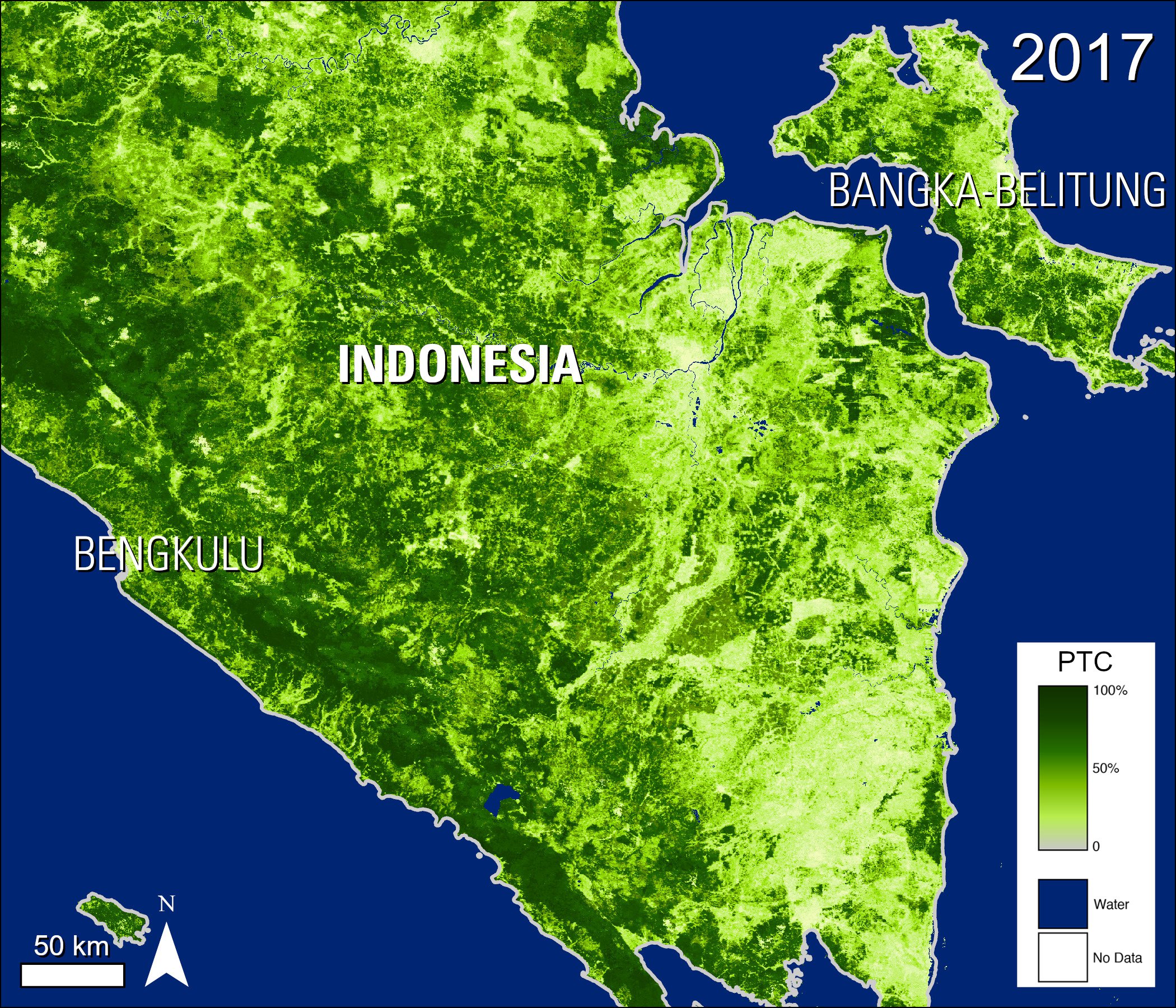 An image of Percent Tree Cover using the Terra MODIS Continuous Fields data product over part of Indonesia. Khiabani and others (2020) identified the two provinces labeled on the map, Bengkulu and Bangka-Belitung, as two areas with highest potential yields.

Khiabani and others’ (2020) research focuses on evaluating palm oil yields and modeling yield potential in Malaysia and Indonesia using publicly available remote sensing data from 2000–2017. First, the authors map palm oil distribution using Terra MODIS Vegetation Continuous Fields data (MOD44B) and Terra MODIS Vegetation Indices data (MOD13Q1), which helped them distinguish rubber plantations from palm plantations due to defoliation, along with Advanced Land Observation Satellite (ALOS) and Phased Array type L-band Synthetic Aperture Radar (SAR) and ALOS-2 (PALSAR-2) mosaics using the Classification and Regression Trees (CART) method. Next, they estimate the year of planting using the MOD44B data using a linear regression model. This is important because the age of the palms reflects the amount of palm oil that can be extracted from the tree. Then they evaluate the biophysical suitability by calculating geomorphological and meteorological suitability based on a framework from the Food and Agriculture Organization of the United Nations (FAOUN). Finally, they assess the palm oil yields while comparing actual yields to potential yields, which were estimated based on the biophysical suitability and age of the palm plantations. The authors found that the average potential yield in Malaysia for the year 2017 ranged between 13.8 and 19.3 tonne (t) per hectare (ha)−1, with an actual yield ranging between 14.48 and 20.63 t ha-1. The average potential yield in Indonesia for the same year ranged from 17.8 t ha−1 to 21.7 t ha−1, with the actual yield ranging from 8.49 t ha-1 to 15.40 t ha-1. The highest potential yields were found to be in the provinces of Bangka-Belitung, Bengkulu, and West Sumatera in Indonesia, and Sabah, Sarawak, and Perak in Malaysia. The authors believe their study showed remote sensing data can be used to model potential and actual palm oil yields and to show the spatial distribution of those yields. They recommend future studies use finer spatio-temporal resolution data, cover different locations, include additional factors such as pests or disease, and include ancillary information on the age of plantations. The authors hope results from this study can be used to help with long-term planning for a more sustainable palm oil industry. 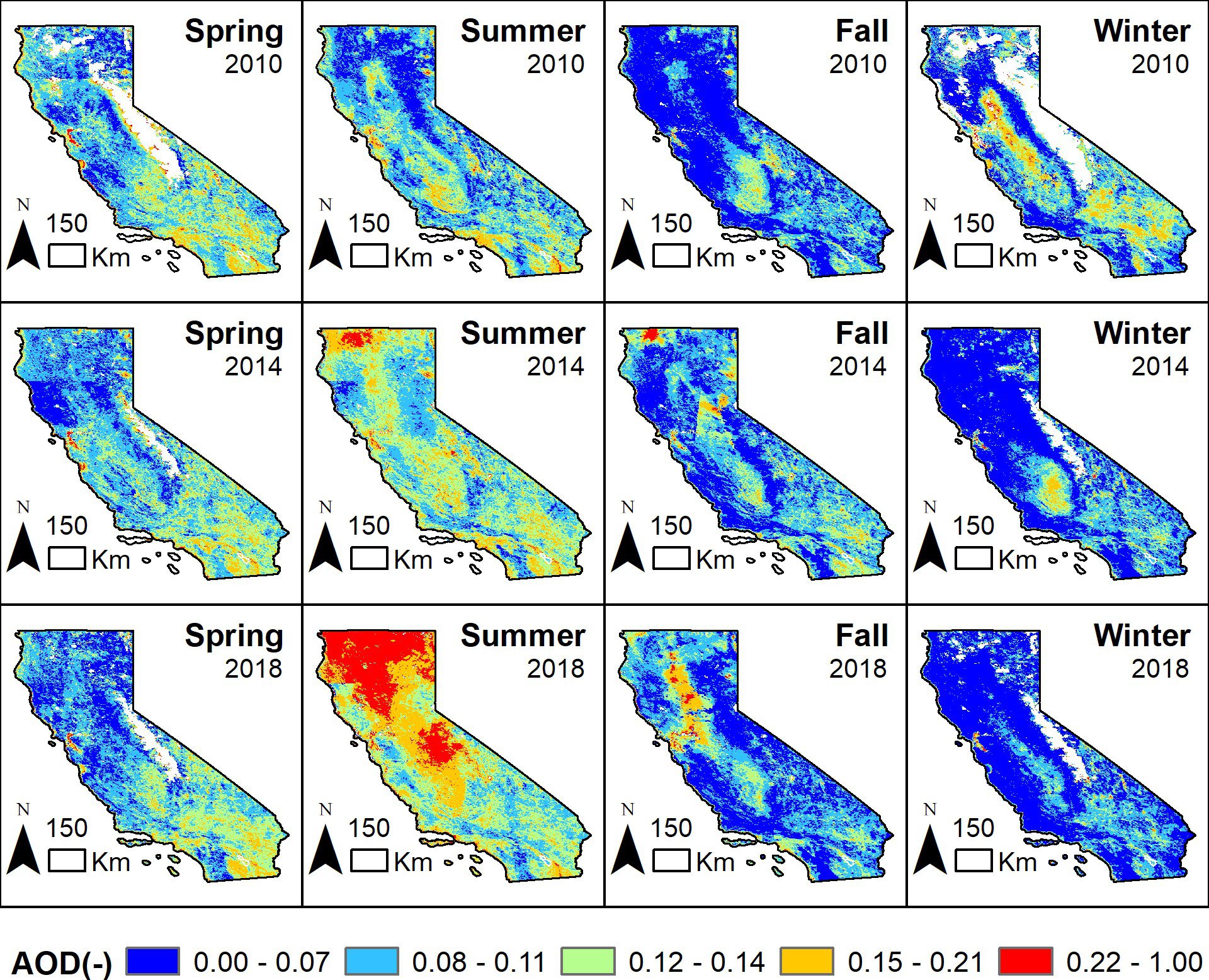 Image and caption provided by the authors, Yu and others (2020).

Poor air quality has been shown to have negative impacts on human health. Factors that can contribute to the decrease in air quality can occur both naturally and as byproducts from human activities such as driving motor vehicles. Motor vehicle emissions that contribute to poor air quality come in the form of particulate matter (PM), which can come in various sizes. Particulate matter with diameters smaller than 2.5 micrometers (PM2.5) are very fine particles that when inhaled travel deep into the lungs and can cause disruptions in lung and respiratory functioning along with other ailments. Yu and others (2020) set out to create a model that accurately predicts PM2.5 amounts using open and accessible data to help in developing management and mitigation plans as well as to help guide government regulations for clean air.

This study was able to show that PM2.5 can be predicted using ANN with meteorological and AOD inputs. The authors identified seasonal patterns in their data. During the summer season, the highest maximum PM2.5 and the lowest minimum PM2.5 were experienced, while in the winter months the opposite was true (i.e. the lowest maximum PM2.5 and the highest minimum PM2.5 was experienced). ANN models for each season (i.e. Summer, Fall, Winter, and Spring) were trained and validated. The best performing model was for the winter season with a coefficient of determination (R2) of 0.984; a root mean squared error (RMSE) of 0.027; and a mean absolute percentage error (MAPE) of 25.311. The lowest performing model was for the summer with an R2 of 0.920; an RMSE of 0.057; and a MAPE of 65.214. These results indicate the PM2.5 resulting from motor vehicle use can be reasonably predicted using ANN and can potentially aid in monitoring and informing strategies for managing air pollution.