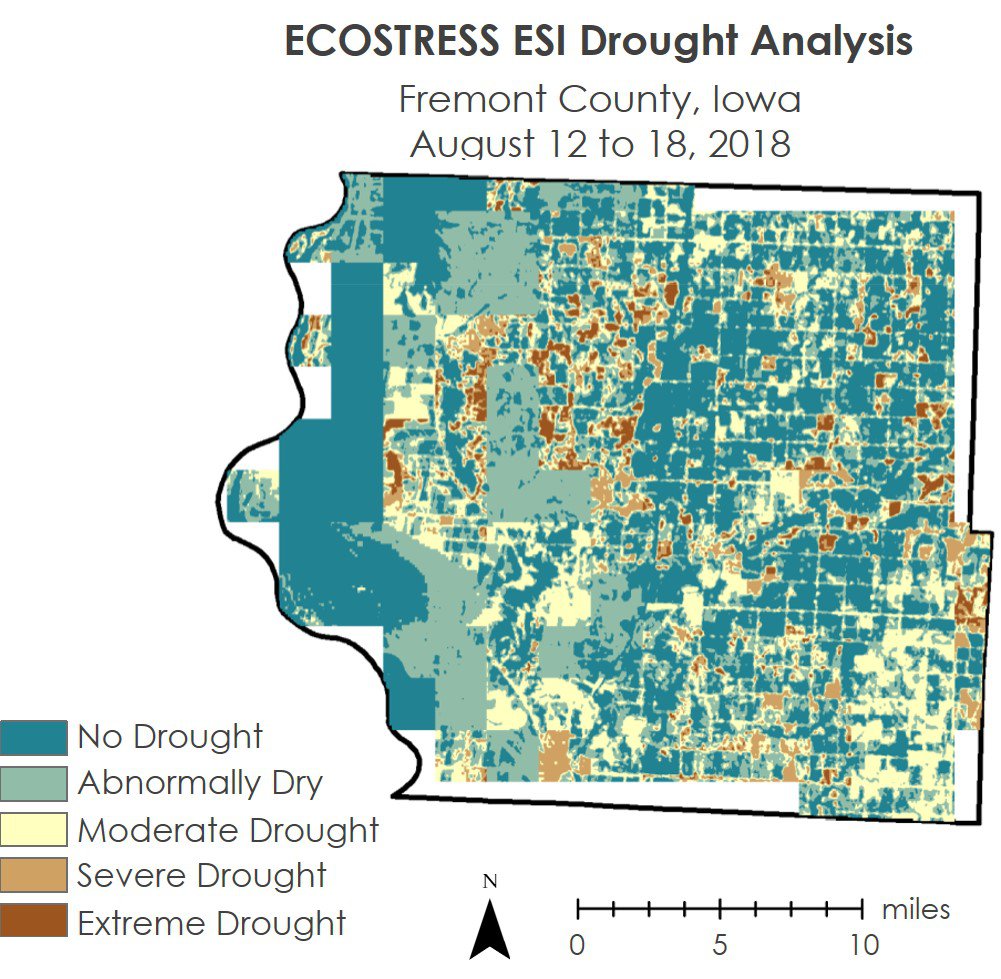 All projects conducted in the spring term, as well as in past terms, can be found in the DEVELOP archive.

Drought is a serious issue that impacts most of the world at one time or another. One US state, Iowa, is particularly vulnerable to the economic devastation that droughts can cause because 92 percent of its land is classified as agriculture, a large portion of which is rain-fed, or dependent on seasonal rainfall. Historically it has been difficult to identify drought until it is already impacting plants and crops in an area, but what if we could detect drought sooner? That is what the Iowa Agriculture & Food Security DEVELOP team aimed to do during their term. The team used remote sensing data, including Evaporative Stress Index (ESI) data (ECO4ESIALEXIU) from the ECOSTRESS sensor aboard the ISS, Land Surface Temperature and Emissivity S-NPP NASA VIIRS data (VNP21A1D), and thermal data from the Landsat 8 Thermal Infrared Sensor (TIRS) to investigate if these data can be used to detect droughts sooner, which could help land managers take action to prevent crop loss. The team completed a statewide drought analysis by processing and analyzing these data using Geographic Information System (GIS) software, leading them to create two unique drought assessment models. They then compared their assessments with existing methodologies to see if using their method could help enhance the drought analysis procedures currently used by the Iowa Department of Agriculture and Land Stewardship Climatology Bureau. The team found that the higher spatiotemporal resolution ESI products they created can provide finer details for drought conditions. In the future, the Bureau will be able to use the assessments created by this DEVELOP team to enhance their current methods for tracking droughts.

Watch this video created by the Iowa Agriculture & Food Security DEVELOP team to learn more about their project and how they used NASA Earth science remote sensing data.