Several teams investigated vegetation regrowth and flooding risk after wildfire events. One team used Terra MODIS NDVI data and ASTER GDEM in conjunction with the NOAA PERSIANN Climate Data Record to create risk maps showing how precipitation anomalies, burn severity, and vegetation response impact flooding in the southwestern United States. Another team used the MODIS Burned Area product (MCD45A1) along with Landsat to quantify fire distribution in Ericaceous shrublands of the Bale-Arsi massif, Ethiopia, mapping burned areas over a 42 year period (1973-2015). The team’s findings improved the understanding of past fire extent, which will inform future conservation efforts by The Murulle Foundation and its partners in Ethiopia. Another team created a risk map of potential wildfire areas across Texas. The map delineates areas that contain dry fuels and, more specifically, how dry the fuels are. This team used Terra MODIS NDVI data (MOD13Q1), Aqua MODIS land surface temperature data (MYD11A2), precipitation from the Multi-Sensor Precipitation Estimate (MPE), and soil moisture from the North American Land Data Assimilation System (NLDAS). The team was able to develop a high-resolution drought index that can be easily constructed with little cost to the end-user. Methods and results produced for determining drought conditions were presented to the Texas Forest Service for future use throughout the state.

A unique project this term was conducted by a team aiming to develop a remote-sensing approach to assist with ocelot conservation. Landsat 8 Operational Land Imager (OLI) and Landsat 5 Thematic Mapper (TM) data were used to create supervised land cover classifications for 1996, 2005, and 2014 during January through March to assess land use and land cover over time. Surface reflectance data from Terra MODIS (MOD09A1) were then used to calculate NDVI to verify the results from the land cover classification layer. Terra MODIS and Terra ASTER GDEM were used to create a proximity risk map, which will help decision-makers plan future roads in a way that will minimize human-ocelot conflicts. 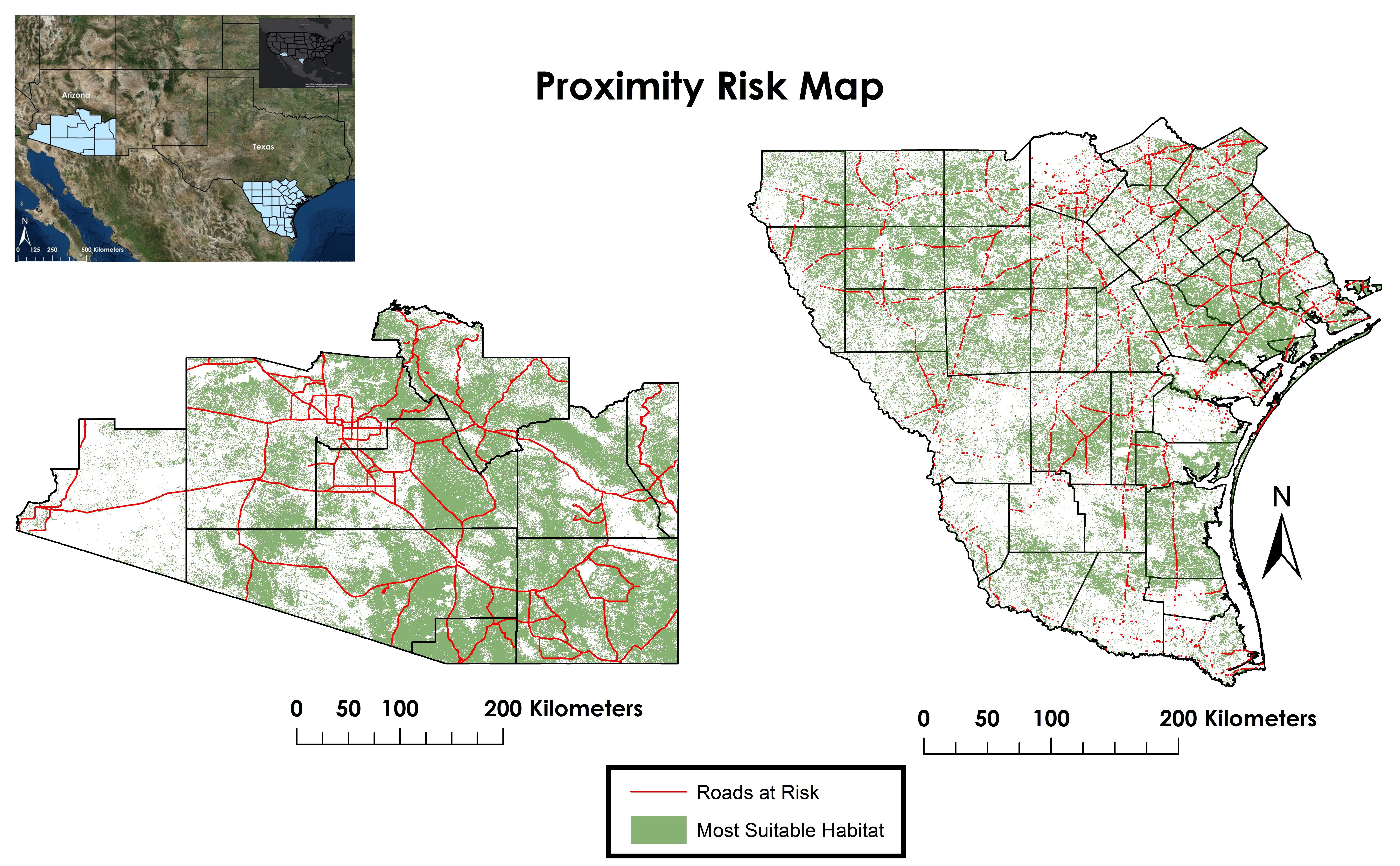 Above are proximity risk maps of the ocelot habitat for Southern Arizona (left) and Southern Texas (right) in 2014. The maps show areas most at risk for ocelot-human interface. Maps provided by NASA DEVELOP.

Read about all the NASA DEVELOP projects here: https://develop.larc.nasa.gov/projects.php

About the NASA DEVELOP National Program (Author's Note 5/15/2020: At the time of publishing these references were available online, some resources may no longer be available.)

The DEVELOP National Program is part of NASA’s Applied Sciences Program. Participants from around the country join the DEVELOP program for 10-week terms to apply data acquired by NASA Earth-observing satellites to bridge the gap between science and society. DEVELOP participants work with local, state, and federal partners to create maps and other products in nine focus areas including Agriculture, Climate, Disasters, Ecological Forecasting, Energy, Health and Air Quality, Oceans, Water Resources, and Weather. Frequently, these projects utilize data that is distributed by NASA’s LP DAAC, such as data from the MODIS instrument, which is aboard the NASA Terra and Aqua satellites, and ASTER, onboard Terra. These data are used to map a variety of environmental changes across the globe.