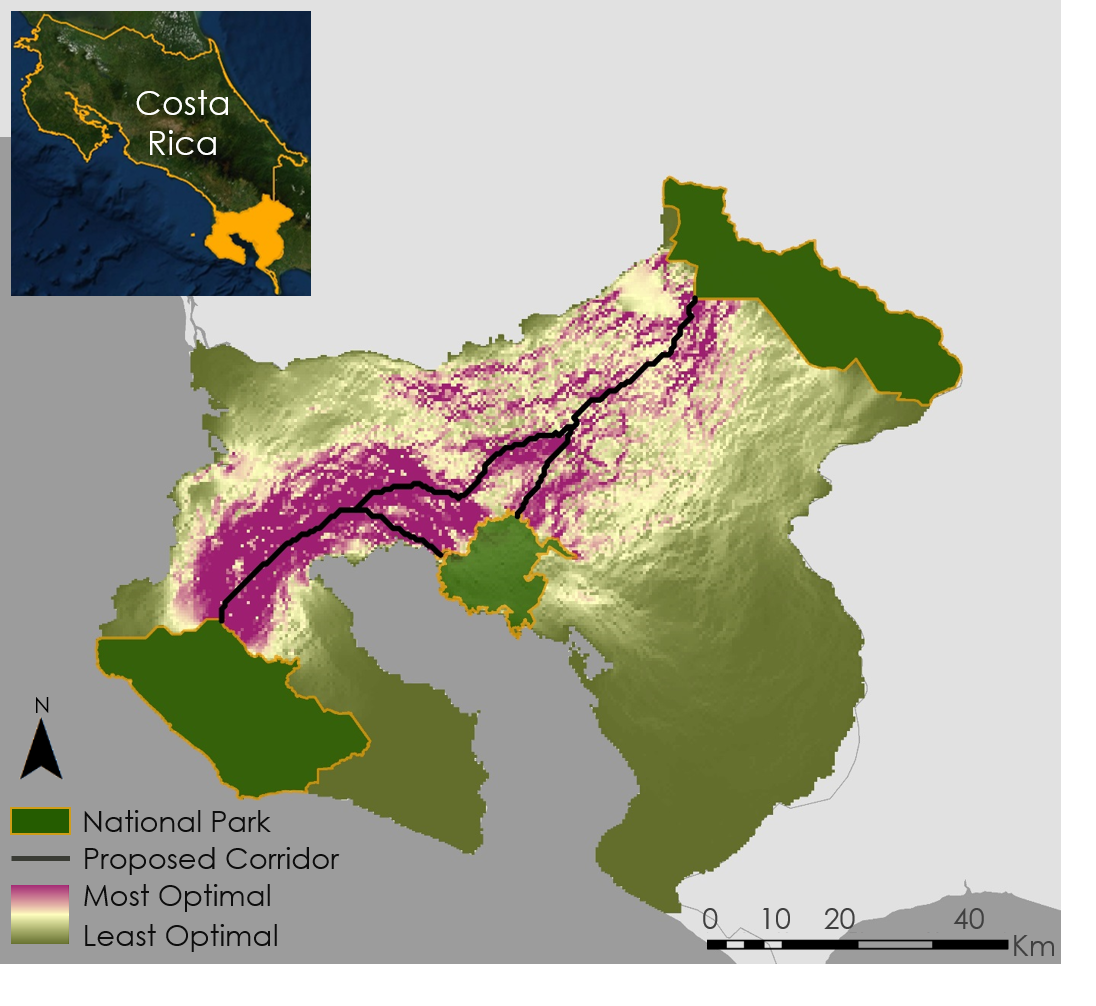 A map created by the DEVELOP team showing a proposed corridor location through areas of optimal jaguar habitat.

All projects conducted in the summer term, as well as in past terms, can be found in the DEVELOP archive.

The small country of Costa Rica accounts for 6 percent of the world’s biodiversity. One of the animals found there is the jaguar, an important part of the Costa Rican ecosystem. The jaguars of Costa Rica live in two disconnected southern regions: the Corcovado National Park on the Osa Peninsula and the La Amistad International Peace Park in the Talamanca Mountains. According to the Talamanca – Osa Ecological Forecasting II DEVELOP team, urbanization, deforestation, and agriculture expansion has isolated these populations of jaguars and decreased their home ranges by 40 percent. This has led to inbreeding, a decrease in the genetic diversity, and limited food resources. The jaguars frequently leave these protected areas in search of food, putting humans and livestock at risk for interactions with jaguars. The NASA DEVELOP team worked with the Arizona Center for Nature Conservation and Osa Conservation to create models to determine an ideal location for a jaguar corridor using NASA Earth observation data. This corridor will allow jaguars to move freely between the two conservation areas while limiting their exposure to humans and livestock. The DEVELOP team specifically used Terra ASTER Global Digital Elevation Model (ASTGTM) data from the LP DAAC to observe elevation and calculate the slope of the region for the future corridor. In addition, the team used Landsat 5 Thematic Mapper (TM) and Landsat 8 Operational Land Imager (OLI) data to assess trends in land use and land cover (LULC) from 1987 to 2019 and to forecast LULC to 2030. They used these data, combined with the Terra ASTER data and vector road and urban center data, to create maps of human-jaguar conflict risk areas. The DEVELOP team’s findings were used to create a suitability assessment for the future implementation of the wildlife corridor and are also being used for monitoring and outreach efforts by their partners.

Watch this video created by the Talamanca - Osa Ecological Forecasting II DEVELOP team to learn more about their project and how they used NASA Earth science remote sensing data.