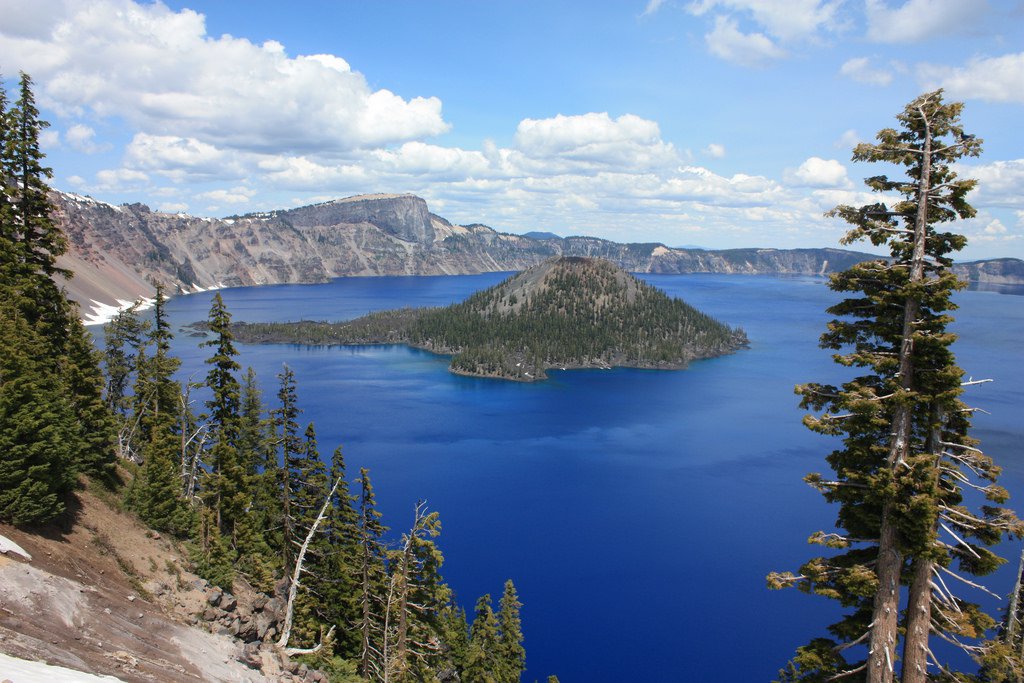 A beautiful day at Crater Lake National Park showing Wizard Island on July 5, 2012, as captured by one of the park’s many visitors.

Ecology can be described as the study of interrelationships between organisms and their environments. As such, ecologists are tasked with gathering data from many different disciplines, sources, and at varying scales in order to successfully study how organisms interact with the environment. Stephens and others (2016) recently highlighted an example of the complexities of ecology by examining how bird species co-exist spatially to form communities in response to their environment in terms of climatic, geographic, and vegetation variables. The authors explore this dynamic at three scales ranging from the entire Klamath ecoregion in Oregon and California down to a specific National Park Service (NPS) unit, including Crater Lake National Park. They use nearly 20,000 point-count surveys of birds in the region, grouped into 29 distinct bird communities, or individual suites of bird species living together on a particular landscape. The authors then examine the correlations between bird communities and 22 different environmental variables. The point-count surveys were collected between 1992 and 2013 during the breeding season, beginning around mid-May in the lower elevations and concluding by mid-July in the higher elevations.

One of the environmental variables used in the study is Fraction of Photosynthetically Active Radiation, or FPAR. FPAR is defined as the fraction of incident photosynthetically active radiation (400-700 nm) absorbed by the green elements of a vegetation canopy. The study used FPAR data derived from measurements collected by the Moderate Resolution Imaging Spectroradiometer (MODIS), located onboard NASA’s Terra and Aqua satellites. MODIS FPAR data have been used to calculate measures such as surface photosynthesis, evapotranspiration, and net primary production. Tying back to the research, this study uses 8-day composite Terra and Aqua Combined MODIS 1,000 meter spatial resolution FPAR data (MCD15A2) as a measure of vegetative productivity for their analysis. Below are a pair of MODIS FPAR images over the region from mid-May and mid-July 2013. Notice the higher FPAR values in shades of green covering areas at lower elevations and near the Pacific Coast, and lower FPAR values further inland and at higher elevations in mid-May. By mid-July, higher elevations in the region, including Crater Lake National Park, are greening, following the pattern of the breeding season for birds.

Overall, the study finds that vegetation, climate, and geography all interactively drive bird community distributions across the Klamath Ecoregion.  The study concludes that vegetative productivity (measured using FPAR) is important at the Klamath Ecoregion scale, for all six of the NPS units sampled, and for all vegetation cover types except agriculture. At the ecoregion level, the study finds that bird communities were organized along two gradients: (1) elevation, and (2) along a gradient of vegetative productivity and kilometers to any road, which indicates that dense forest cover may be an important factor. These results show the importance of satellite remote sensing data to ecologists who are looking to successfully study how organisms interact with the environment.

FPAR was correlated specifically with bird communities at Crater Lake National Park in southern Oregon. Identifying environmental factors that govern bird communities at the NPS unit scale is important because land management decisions, such as the management of altered disturbance regimes, are carried out at that scale. This information can then be used to inform conservation efforts for both the organisms and the habitats where they reside. The National Park Service must maintain a delicate balance between the mandates to conserve the scenery and wildlife of the parks and to provide people with access both now and for future generations. For more information on how the NPS is using satellite remote sensing data to meet this mandate, be sure to check out Monitoring Phenology in the National Parks. 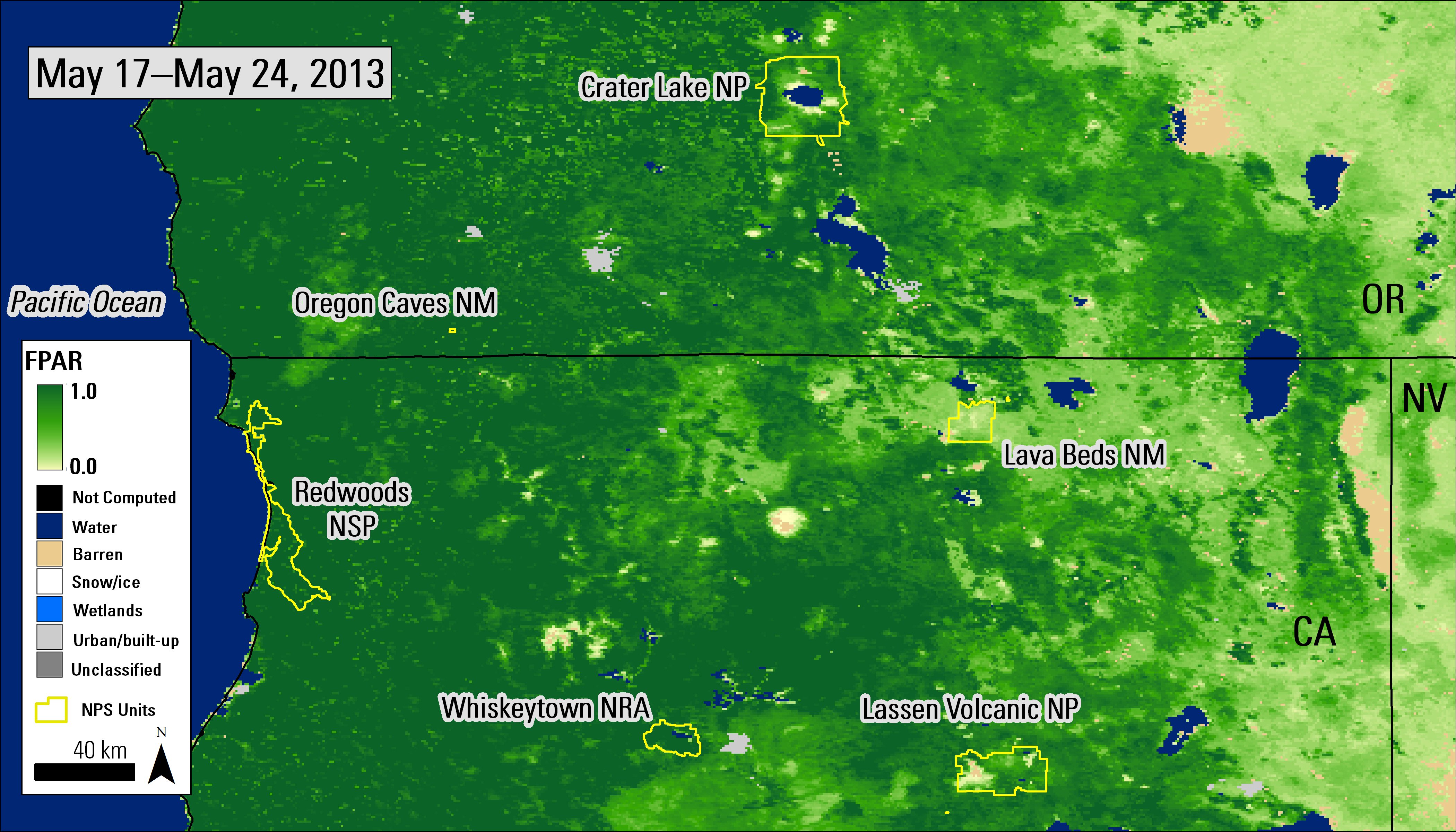 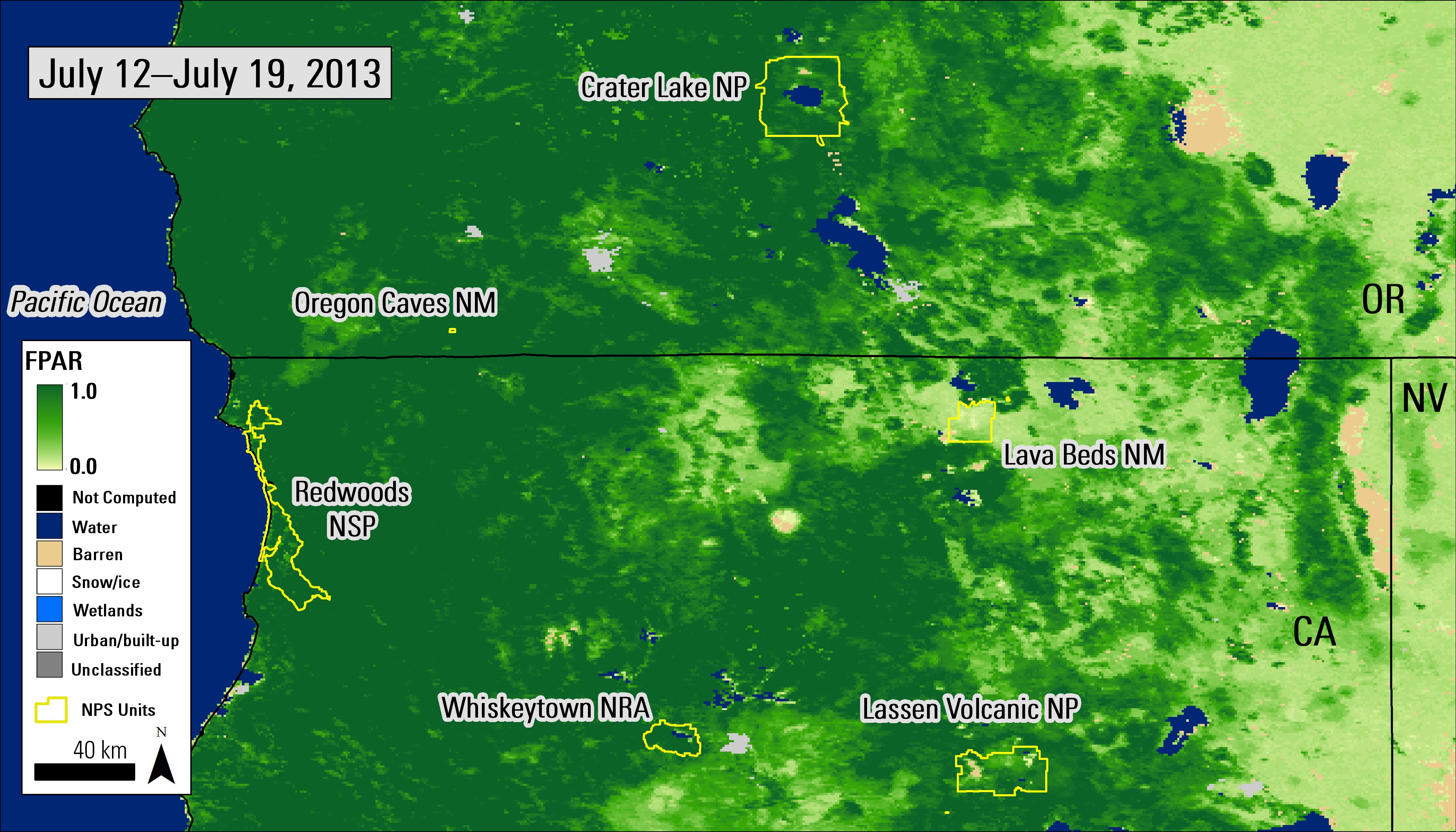 Author's note: Since the time of publication the MCD15A2 product has been replaced with the MCD15A2H product.