Monitoring Phenology in the National Parks 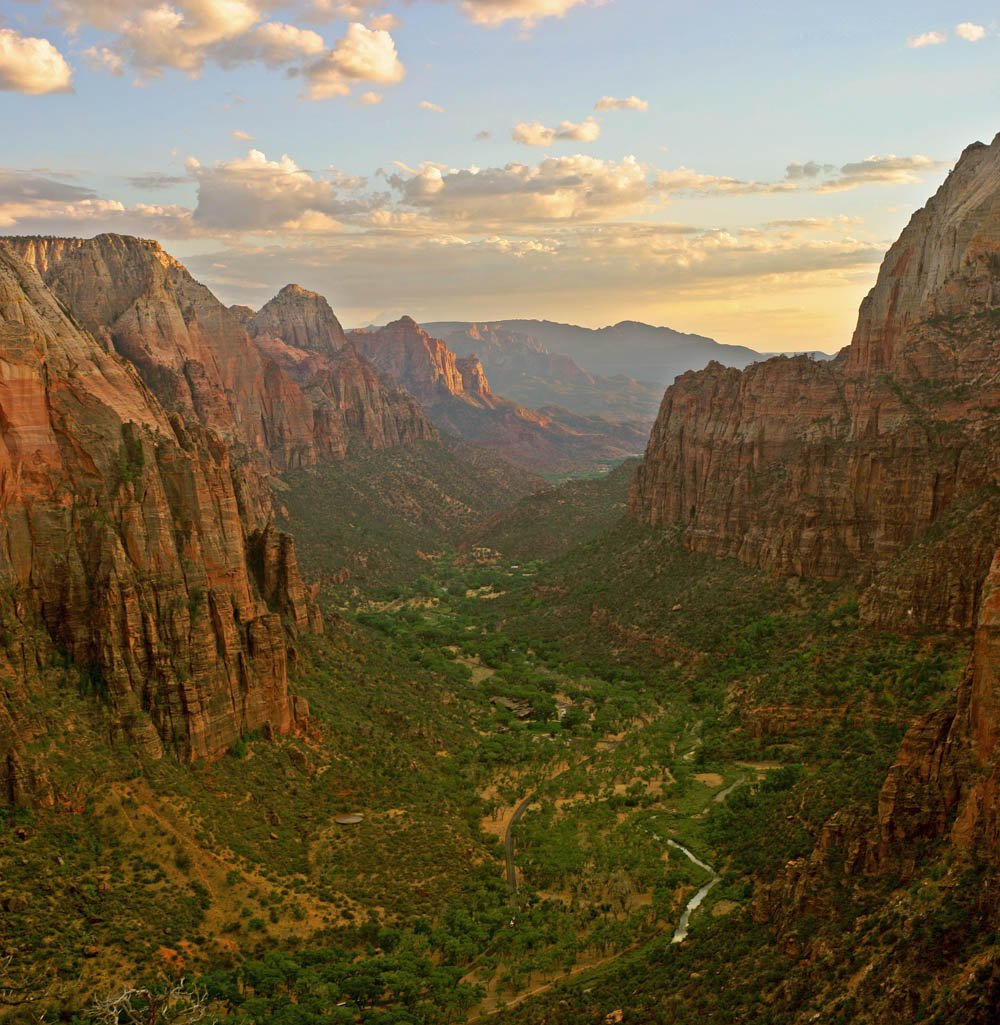 A beautiful sunset at Zion National Park from Angels Landing on September 13, 2004, as captured by one of the park’s millions of visitors.  Diliff/CC-BY-SA-3.0

One way that scientists with the NPS work to “preserve unimpaired” the natural resources of the parks is through the Inventory and Monitoring Division. The division monitors key resources to better understand the dynamic conditions and nature of park ecosystems. The goals of the program are to track the overall condition of parks using long-term scientific study; integrate the information into NPS planning, management, and decision making; and share the information with relevant groups. The program splits the park system into 32 regional networks. Many of the networks, including the Northern Colorado Plateau Network (NCPN), use satellite imagery from the Moderate Resolution Imaging Spectroradiometer (MODIS) to monitor land surface phenology and land condition.

The NCPN serves 16 parks across four states, with diverse ecosystems ranging from desert grass, shrub, and woodlands, to forested terrestrial and river systems. Zion National Park in southwestern Utah is the most visited park in the network, with 3.6 million visitors in 2015. The NCPN uses satellite remote sensing data from MODIS to monitor vegetation phenology and condition on the semiarid Colorado Plateau. Below are a series of MODIS Normalized Difference Vegetation Index (NDVI) images beginning in January and ending in June 2016. Click through the images to view the seasonal development or “greening” of vegetation on the arid Northern Colorado Plateau from winter through spring and into summer.

More specifically, the NCPN uses Terra MODIS 250 meter pixel resolution NDVI 16-day composite data (MOD13Q1) to assess short term changes in weather, and the effects of long term climatic conditions on vegetation condition and phenology. One of the ways they do this is by using MODIS NDVI data to estimate the timing of key phenological variables such as the start, peak, and end of the growing season, as well as the seasonal productivity of vegetation in the region. NCPN staff analyze inter-annual comparisons to reveal how changes in precipitation, temperature, climate, or land condition lead to changes in land surface phenology.

One major finding of the project is that soil moisture and evapotranspiration, or the transportation of water from soil through plants and into the atmosphere via photosynthesis, may have a greater impact on the condition of photosynthetically active vegetation than precipitation alone. At a monthly time-step the MODIS NDVI data can also be used to determine the antecedent weather conditions needed to sustain vegetation in disturbed areas that respond differently to weather and climate than native vegetation. At Zion National Park, this type of information can be used to plan for activities that require optimal growing conditions. In parks that allow livestock grazing, it can be used for decisions about grazing management and stocking rates.

All of this information improves understanding of the impacts of long term climate trends, short term weather patterns, land use and land cover change, and other natural events on the status and trends of broad-scale vegetation condition on the semiarid Northern Colorado Plateau. The NPS can use the knowledge gathered from remotely sensed images to help plan, manage, and make important decisions that ensure future generations will be able to enjoy, learn about, and be inspired by the incredible natural resources of the United States National Parks. 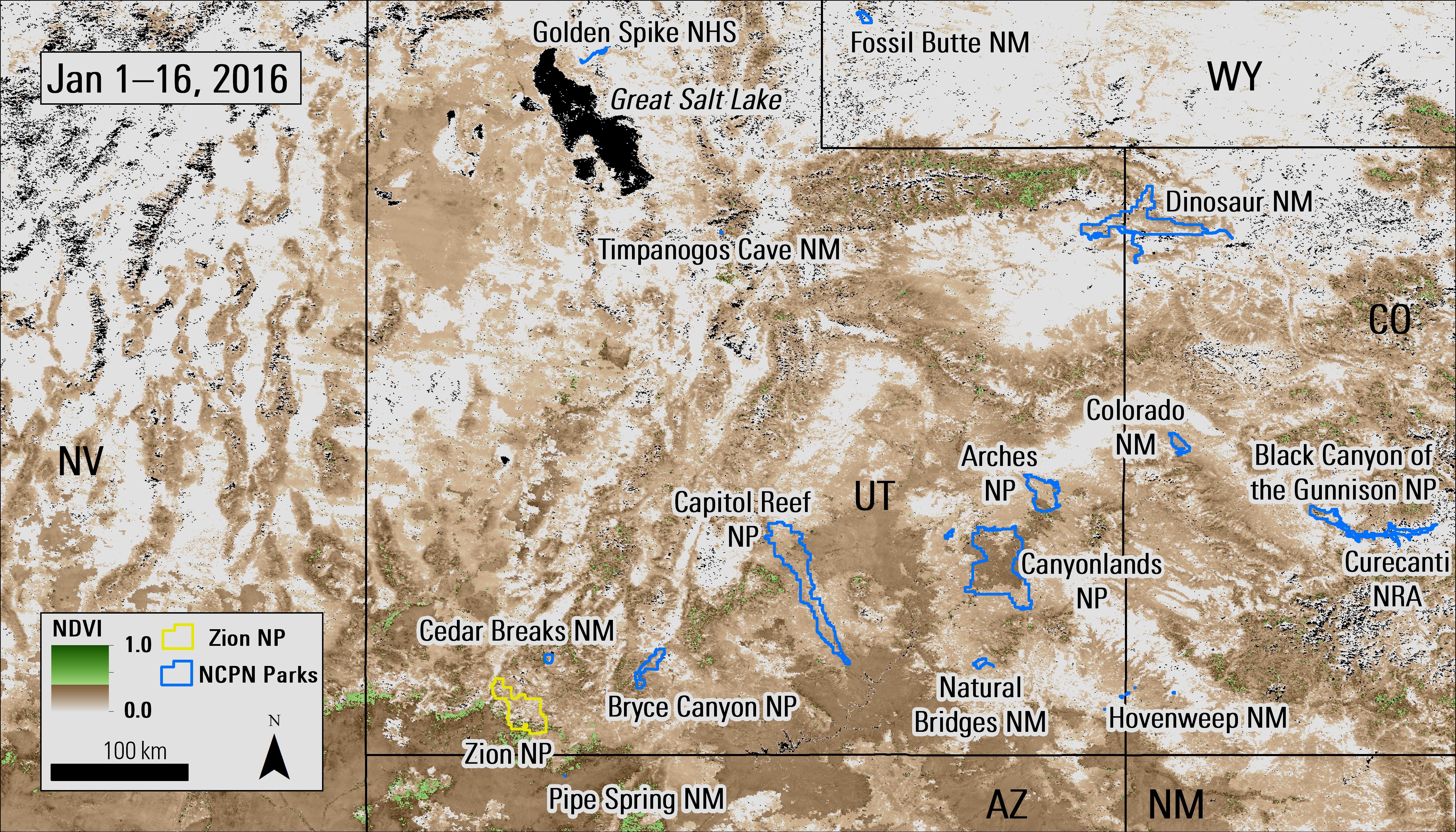 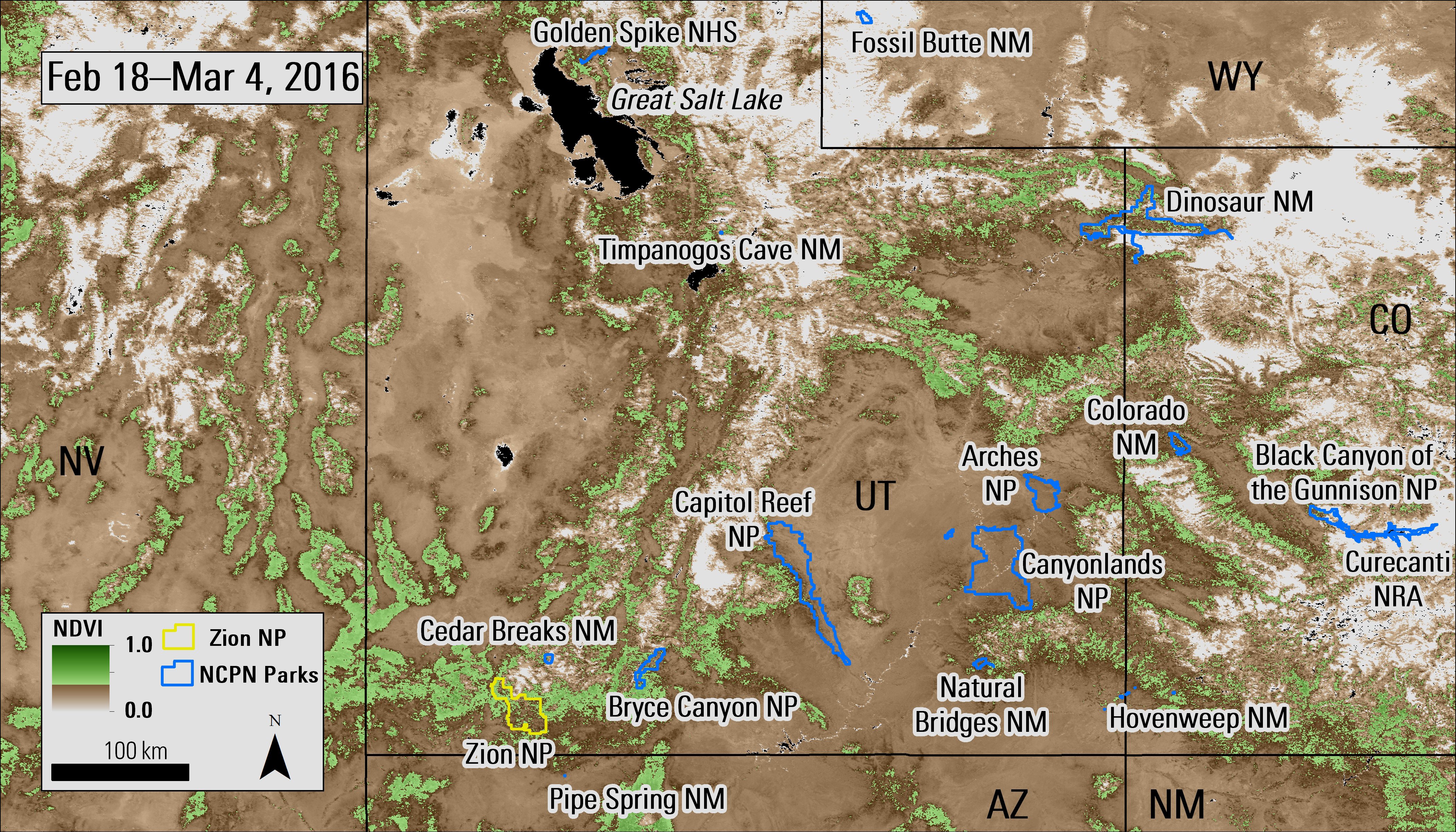 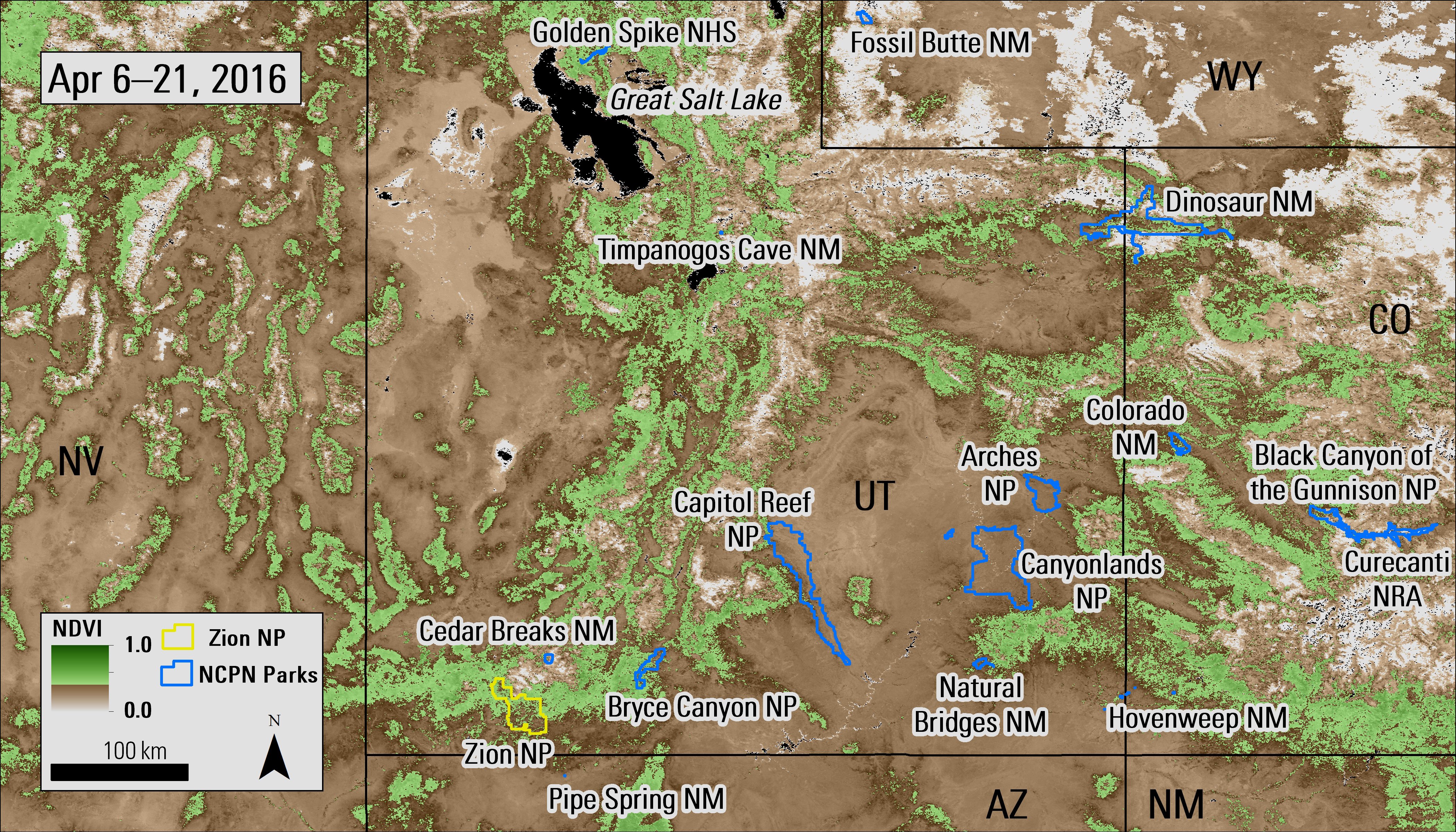 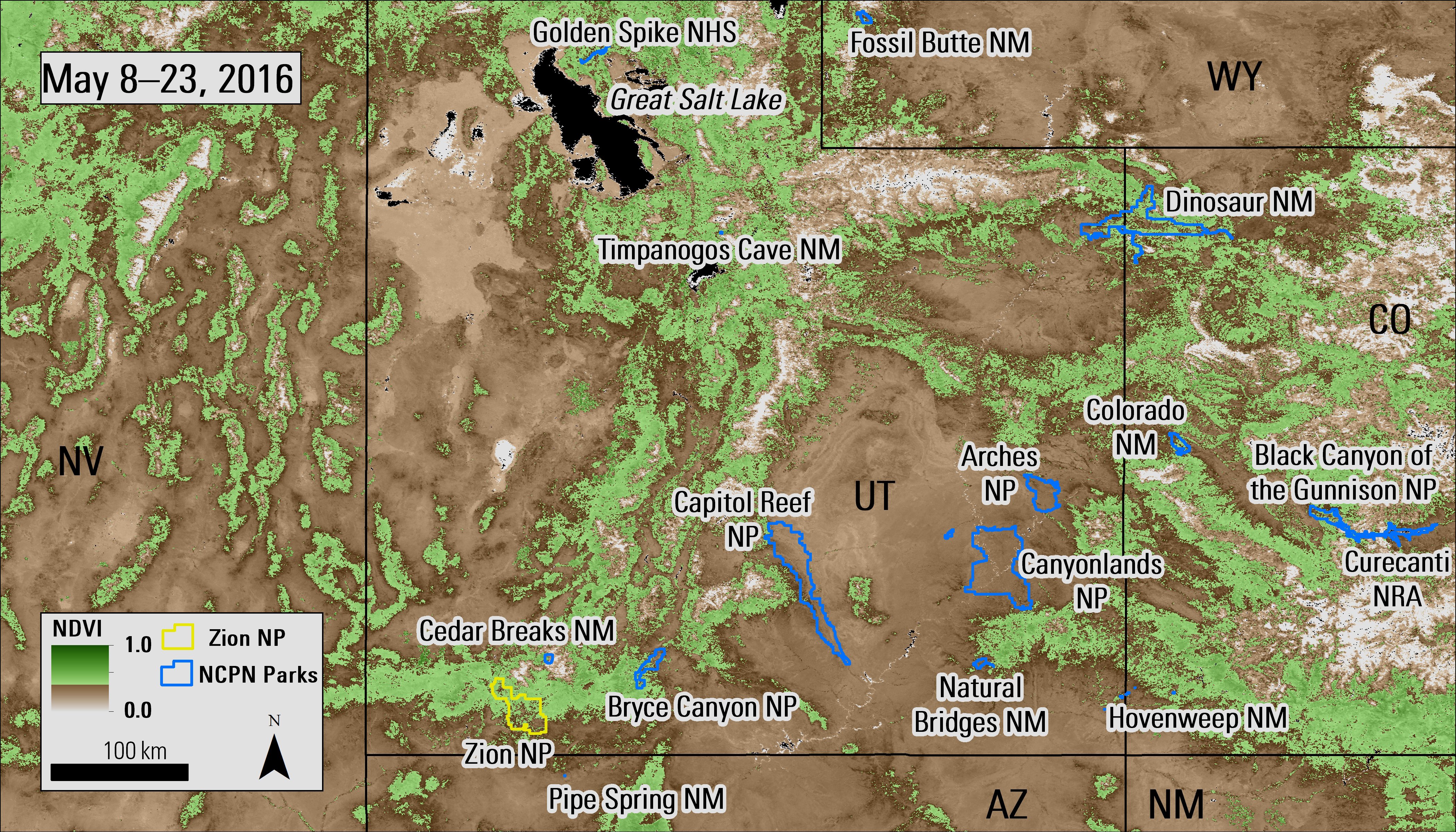 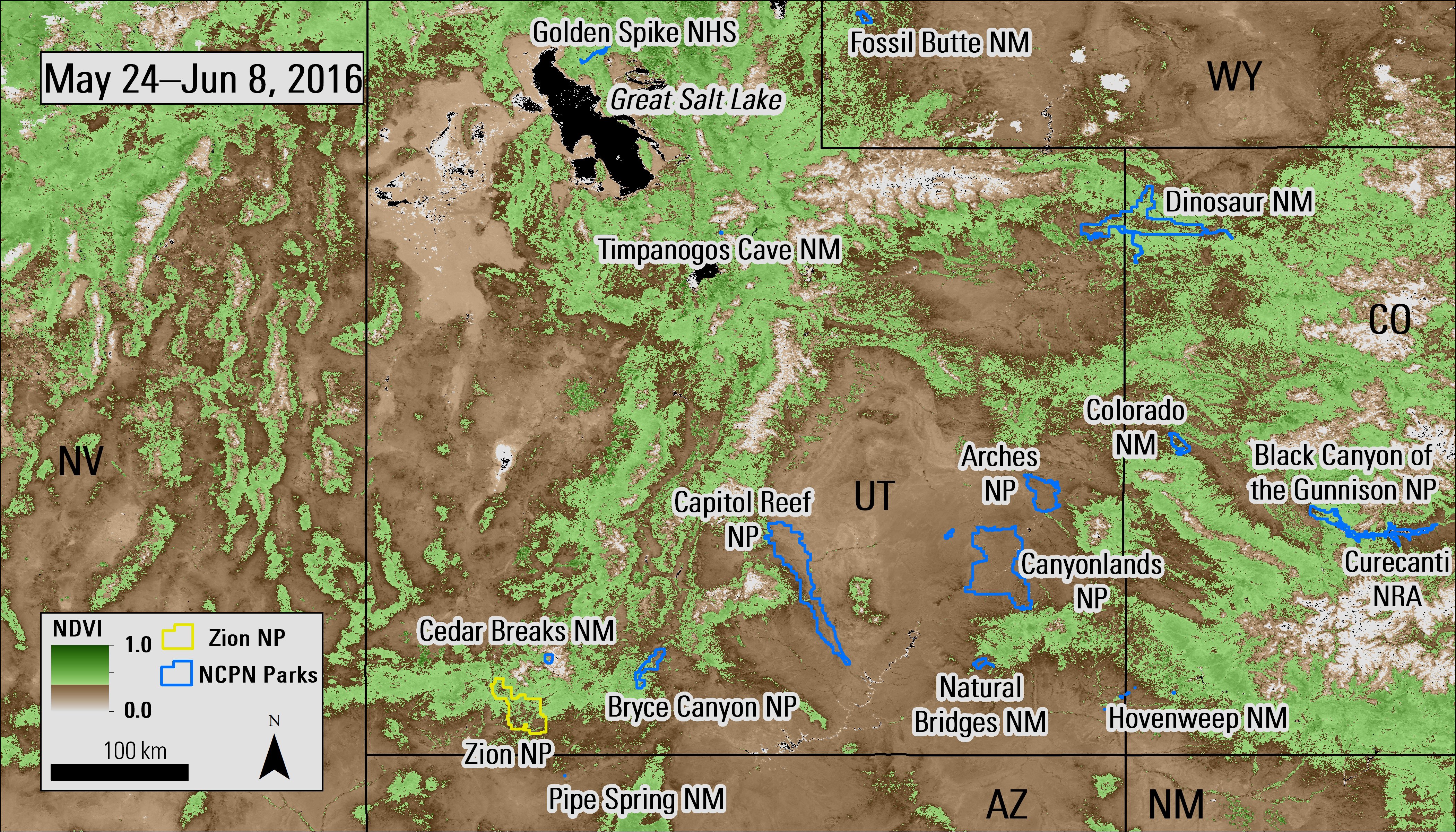 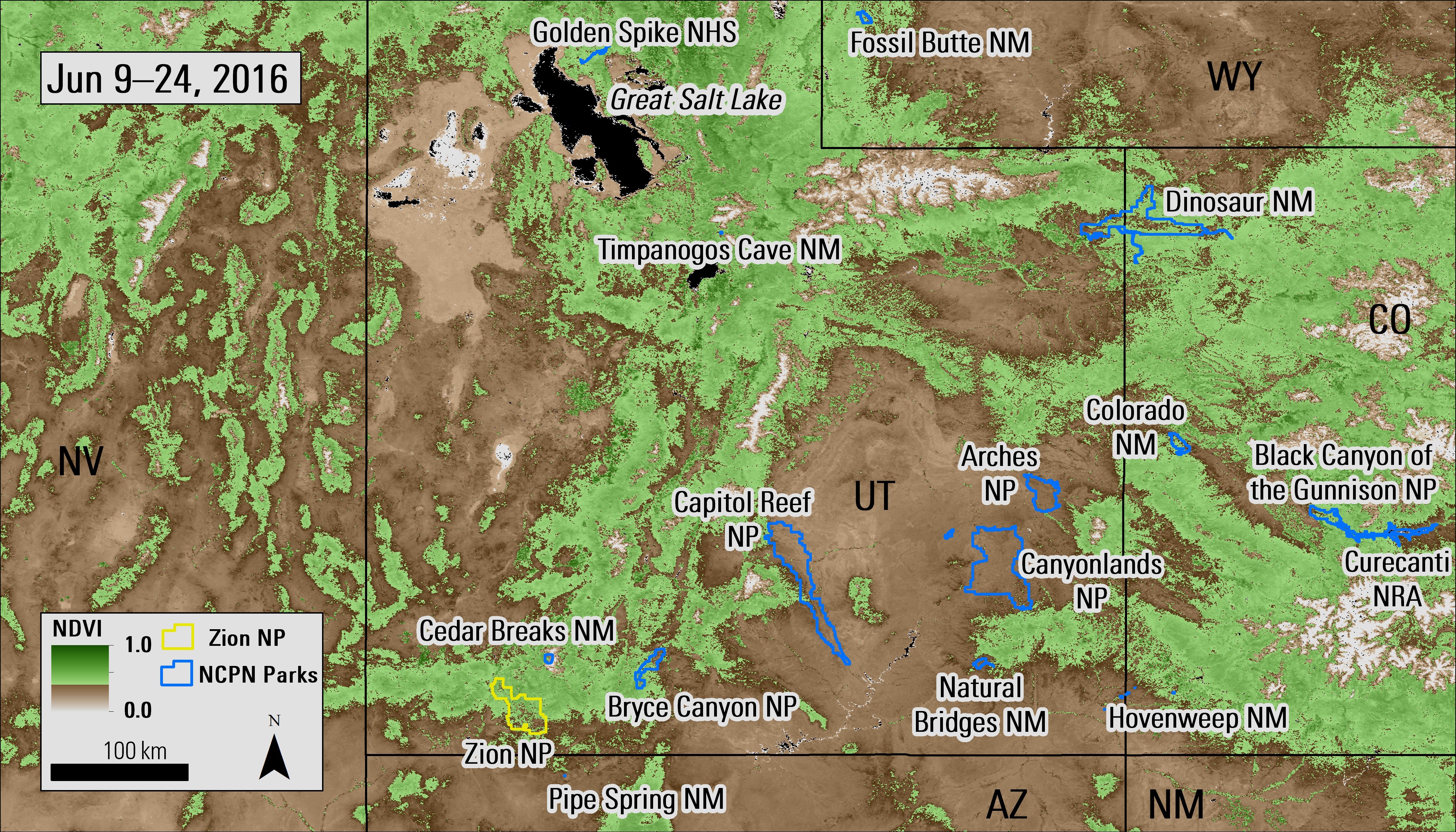