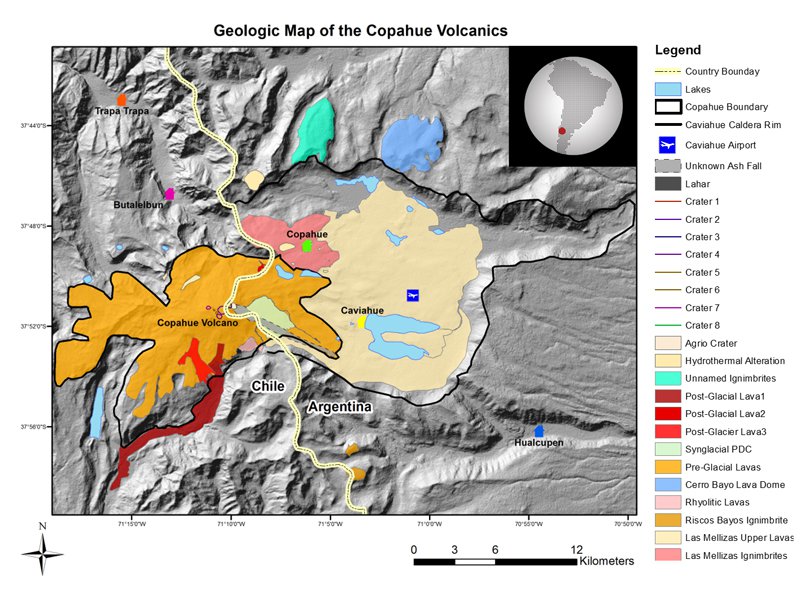 Geologic Map of the Copahue Volcanics, Andes Mountains. ASTER GDEM was used in conjunction with Landsat satellite imagery from 2012 and 2013 to help identify volcanic deposits within the area of study. The information on the map can be used to determine areas that had previously been affected by eruptions and who might be at risk during future eruptions. Image courtesy of the DEVELOP office at NASA Marshall Space Flight Center.

The DEVELOP National Program is part of the National Aeronautics and Space Administration (NASA) Applied Sciences Program. Participants from around the country join the DEVELOP program for 10-week terms to apply data acquired by NASA Earth-observing satellites to bridge the gap between science and society. DEVELOP participants work with local, state, and federal partners to create maps and other products in nine focus areas including Agriculture, Climate, Disasters, Ecological Forecasting, Energy, Health and Air Quality, Oceans, Water Resources, and Weather. Frequently, these projects utilize data that is distributed by the Land Processes Distributed Active Archive Center (LP DAAC), such as data from the Moderate Resolution Imaging Spectroradiometer (MODIS) instrument, which is aboard the NASA Terra and Aqua satellites, and the Advanced Spaceborne Thermal Emission and Reflection Radiometer (ASTER), onboard Terra. These data are used to map a variety of environmental changes across the globe. Featured below are how LP DAAC products were applied by several DEVELOP projects during the spring and summer terms.

For example, the ASTER Global Digital Elevation Model (GDEM), a product of METI and NASA, was used to assess flood impact in Southeast Asia and volcanic hazards in the Andes Mountains. Another project made use of the data product to derive elevation values for the Ochape Sub-Basin in Peru and used the information as an input to the Mapping EvapoTranspiration at high Resolution with Internalized Calibration (METRIC) model. Results of such a model could be useful to the determination of basin water budgets and management plans. Another project, focused on western Rwanda, derived slope length and steepness information from the ASTER GDEM data to determine soil erosion susceptibility. 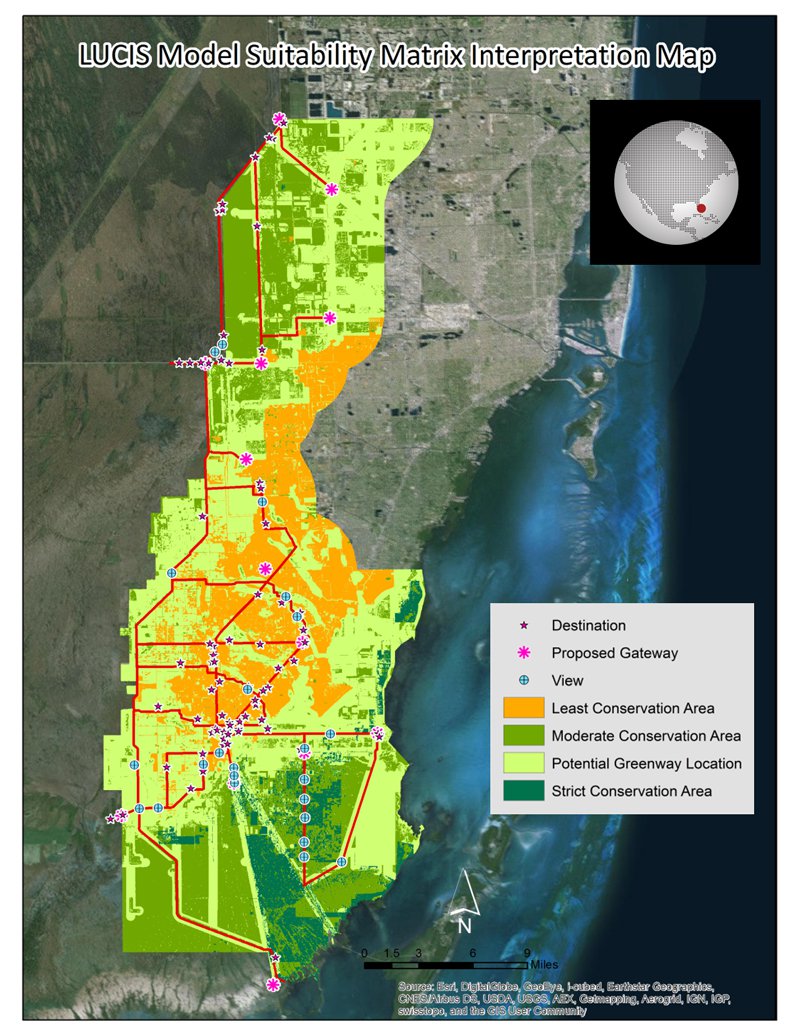 Land Use Conflict Identification Strategy (LUCIS) Model Suitability Matrix Interpretation Map for Miami-Dade County, Florida. Land cover classifications for Miami-Dade County were derived from an ASTER image captured on March 7, 2011. The classifications were used as inputs to the model to identify the most suitable land for greenway development, aiding in the planning of the Western Greenway. Image courtesy of the DEVELOP office at the University of Georgia.

In a project about Miami-Dade County, Florida, the GDEM product was used alongside 15 m ASTER data to calculate NDVI values. From these NDVI values, land cover types were classified. Ultimately, the data were used to help plan the Western Greenway in a way that supports protection and restoration of the Everglades.

Vegetation change in California and in the Central Appalachian Forests was mapped using the MODIS 16-Day Normalized Difference Vegetation Index (NDVI) product (MOD13Q1). NDVI was also used as a component to map drought severity across the Great Plains, and as a variable to monitor and predict bird habitat loss in New England. Terra and Aqua MODIS 8-day Surface Reflectance products (MOD09Q1; MYD09Q1) were used to map the impacts of flood and drought in the Lower Mekong Basin. Another project utilized land surface temperature from Aqua MODIS (MYD11-) to determine the number of growing degree days (also known as the Winkler Scale) to indicate suitable locations for vineyards in Virginia.

Virtual poster sessions of the projects can be viewed through Earthzine.