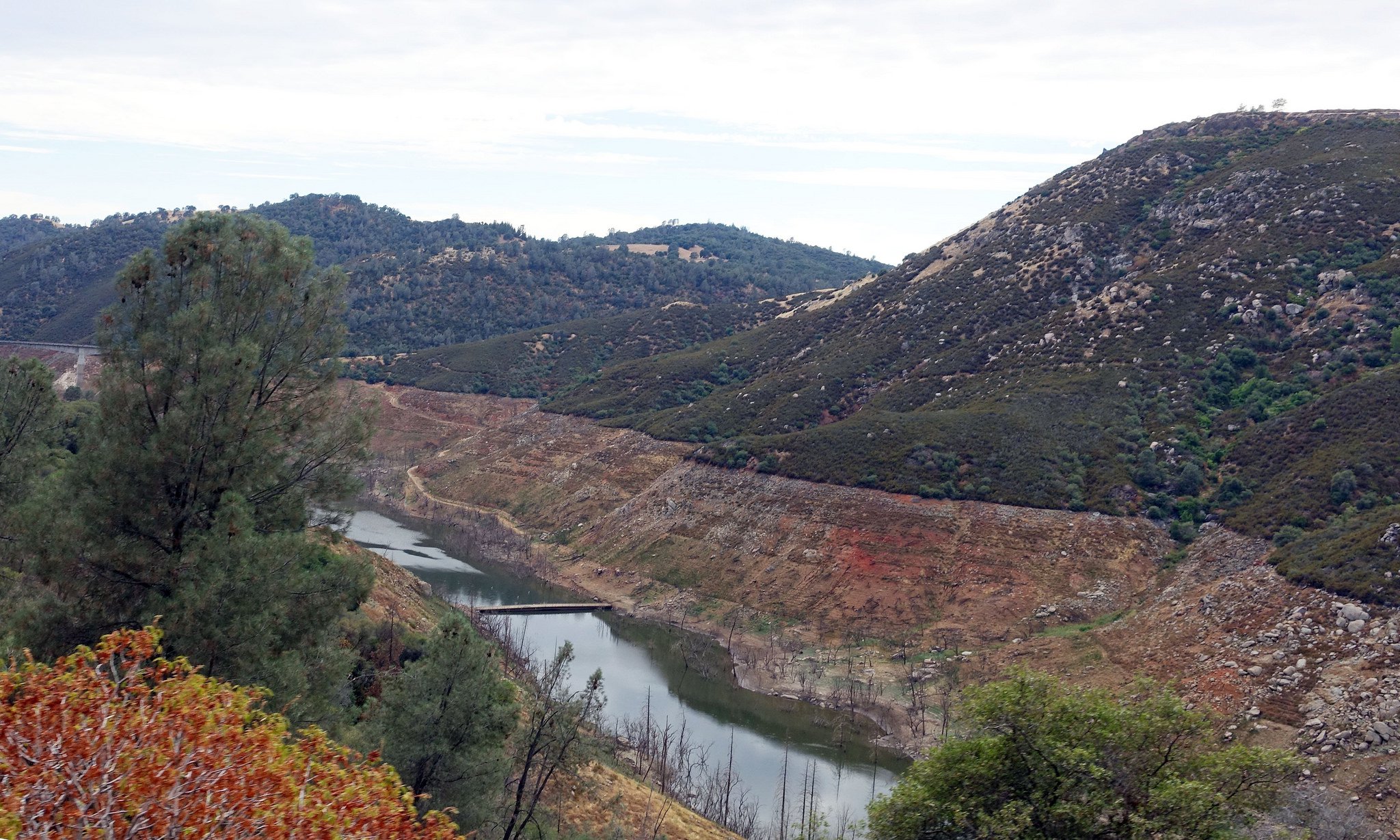 New Melones Lake captured on June 28, 2015. This reservoir is located in the Sierra Nevada foothills. According to the state of California, the reservoir was at 17 percent of total capacity when this photo was taken.

The state of California is in its fourth consecutive year of drought, according to the California Department of Water Resources. This drought has been amplified by increasing temperatures in the region, which impacts water in the state in many ways. The main sources of consumable and agricultural water for California are underground aquifers, reservoirs, and mountain snowpacks. However, in recent years the volume of water in these sources has been, and is currently, decreasing.

There are many factors that are contributing to the current drought in California. One of the contributing factors is a record decrease in the amount of snowfall during recent winters. Typically snowfall accumulates during the winter, forming snowpacks, which melt during the spring. This meltwater flows into streams, reservoirs, and rivers. According to Carlson and others (2015) peak snowpacks are traditionally measured in California both manually and electronically every year on April 1. During years of normal precipitation, the California Department of Water Resources records melted snowpack as providing approximately 30 percent of California’s water supply. However, the recent amount of snowfall has limited this source of water.

The Moderate Resolution Imaging Spectroradiometer (MODIS) sensor, located on NASA’s Terra and Aqua satellites, is able to provide daily coverage of the Earth. These satellite data can be used to observe how large areas of the Earth’s landscapes change over time, including changes in snowpack. Below, surface reflectance data from Terra MODIS (MOD09GA) illustrates changes in the snowpack of the Sierra Nevada Mountain range from 2006 to 2015. Wet years are typically characterized by larger snowpacks and drought years by lesser snowpacks. The state of California identified 2006, 2010, and 2011 as wet years and drought years as 2007 – 2009 and 2012 – 2015.

According to the United States Department of Agriculture’s Natural Resources Conservation Service, during the initial months of 2015 the snow water equivalent (SWE) was at a maximum of only 50 percent of the average SWE during these months. The 2015 measurements recorded a high of 31 percent of the average SWE for April. According to Belmecheri and others (2015) the SWE in the Sierra Nevada Mountains was at 5 percent of its historical average. By looking at blue oak tree-ring data, Belmecheri and others determined that based on 500 years of data, the 2015 SWE for the Sierra Nevada Mountains is at an unprecedented low.

Ten Terra MODIS true-color surface reflectance (MOD09GA) images of the Sierra Nevada Mountains captured between 2006 and 2015 during the end of March and the beginning of April. Researchers can use MODIS surface reflectance data to observe and measure changes in snow levels.