The Role of Terrain Data 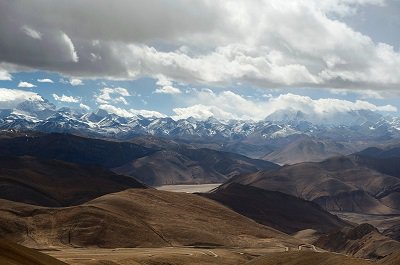 Terrain data, such as information about elevation, slope, and aspect, can play an integral part in many land change and management studies. These data are particularly useful in the form of digital elevation models (DEMs). Most simply, DEMs can be used to create 3-dimensional data visualizations, which provide an insightful perspective on landscapes. For more complex studies, DEMs can be used to map hazardous terrain, to calculate topographical features such as slope and aspect, and as an input variable for modelling landslides or snowmelt. Digital elevation data can be created from many different sources. The LP DAAC distributes terrain data from two different sources: (1) NASA’s Shuttle Radar Topography Mission (SRTM) version 3.0 (SRTM V3.0) and (2) the Advanced Spaceborne Thermal Emission and Reflection Radiometer (ASTER) Global Digital Elevation Model (GDEM) version 2.0 (ASTGTM; GDEM2).

SRTM V3.0 was funded by the NASA Making Earth System Data Records for Use in Research Environments (MEaSUREs) program. This version of SRTM data uses other DEM sources such as ASTER GDEM2, the USGS GMTED 2010, and the USGS National Elevation Database (NED) to fill in voids from radar data originally collected during a collaborative space shuttle mission in 2000. The SRTM V3.0 datasets provide coverage from 60oN latitude to 56oS latitude and have 3 arc second (~90 meter) or 1 arc second (~30 meter) resolution. Datasets with 3 arc second resolution are publicly available for the entire coverage extent and were released in November 2013. One arc second data for the United States was also released in November 2013, but the global 1 arc second SRTM V3.0 product (SRTMGL1) has been made available to the public on a region by region basis over the past year. By the beginning of January 2015, 1 arc second SRTM V3.0 products had been released for nearly the entire product coverage area with the exception of the Middle East and parts of Africa. With the recent data releases of the higher resolution SRTM data, data users now have more options of high resolution elevation data for use in their studies and applications.

The ASTER GDEM2 dataset was created from nearly 1.6 million ASTER scenes collected by NASA’s Terra satellite between 2000 and 2010 and is a product of Japan’s Ministry of Economy, Trade, and Industry (METI) and NASA. The GDEM2 dataset was released in October 2011. The dataset has global coverage with approximately 30 meter resolution at the equator. An example of how elevation values from ASTER GDEM data were used is demonstrated by Yao and Zhang (2014). In this study, the authors quantify the year-round mass elevation effect of the Tibetan Plateau in southern China and explore the influence of the effect on the elevation of the Plateau’s alpine treeline. The Tibetan Plateau ranges from 4,000 – 6,000 meters (~13,123 – 19,685 feet) in elevation and serves as a heating source that influences both local and global climates. The authors compare air temperature values, estimated from monthly Terra MODIS land surface temperature and emissivity (MOD11C3) data, to treeline locations at defined elevations extracted from ASTER GDEM data. The authors find that air temperatures over the interior of the Tibetan Plateau are about 2 – 7oC (35.6 – 44.6oF) warmer, as compared to nearby mountain ranges. These warmer temperatures allow for trees to grow at higher elevations. The alpine treeline on the southeastern Tibetan Plateau has an elevation range of 4,700 – 4,900 meters (~15,420 – 16,076 feet), the highest in the Northern Hemisphere. 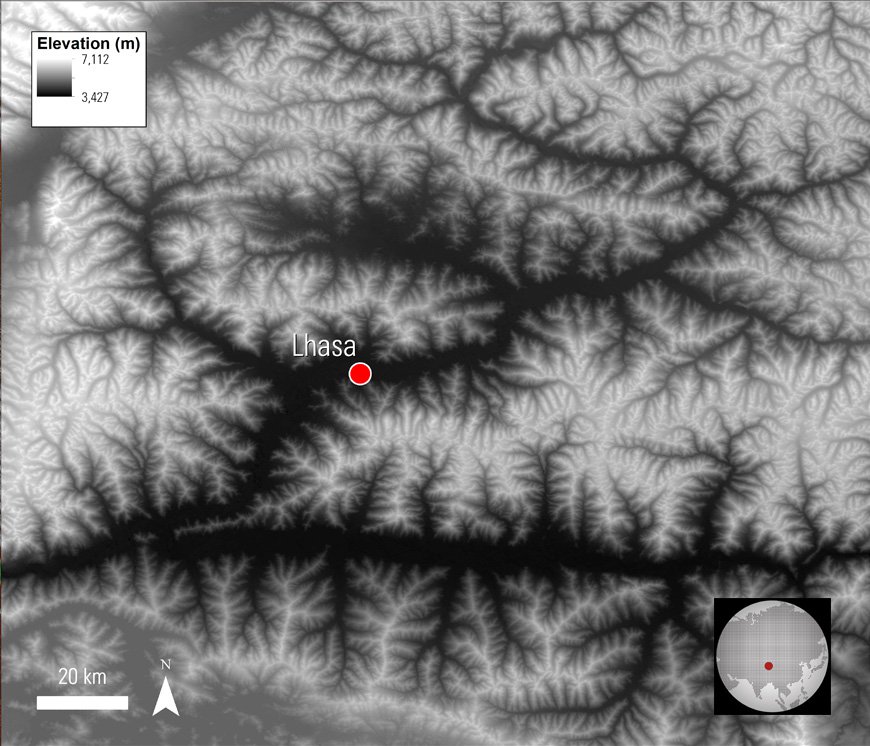 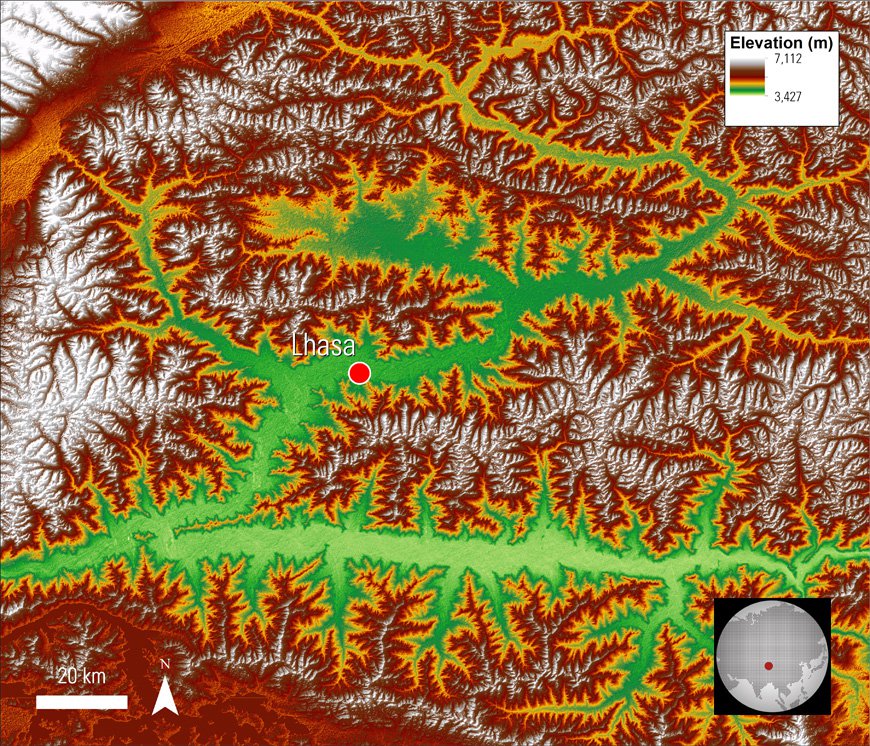 Click here to view a webinar and learn more about ASTER GDEM2 and SRTM V3.0.

Information about ASTER GDEM2 and how to download can be found here.

Information about NASA SRTM V3.0 and how to download can be found here.