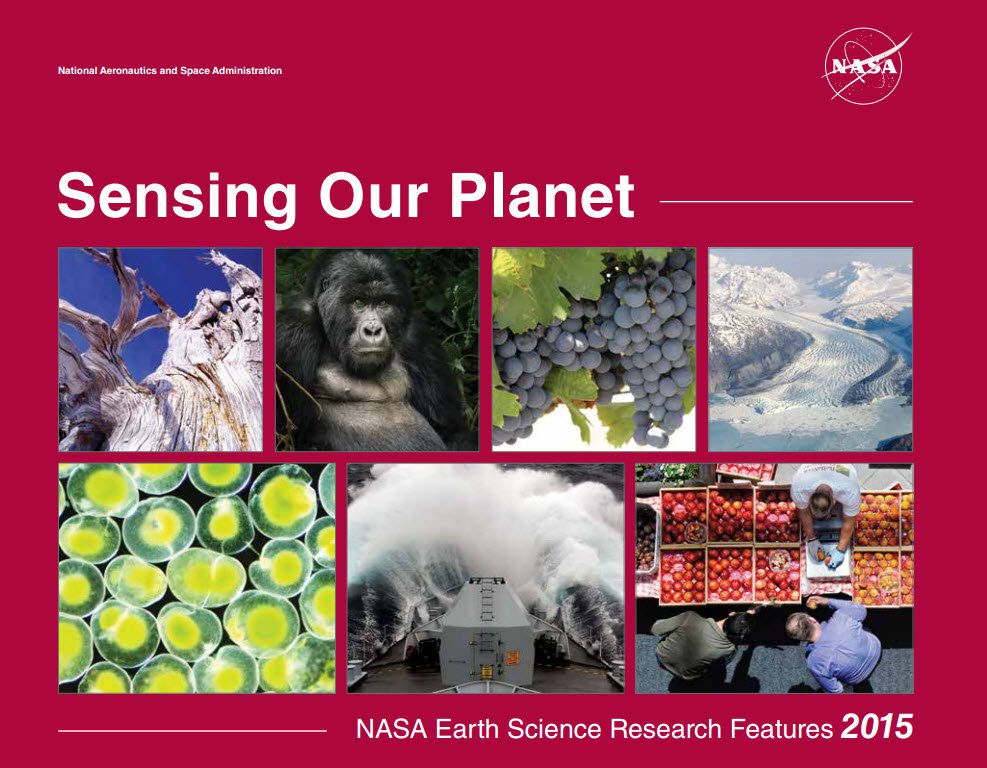 Articles and images from Sensing Our Planet: NASA Earth Science Research Features 2015 are available online at the NASA Earthdata website in both pdf and web formats.

A few of the 2015 stories feature data distributed by the Land Processes DAAC. Some of the data products used are from the Moderate Resolution Imaging Spectroradiometer (MODIS) sensor, onboard both the Terra and Aqua satellites, and the NASA Shuttle Radar Topography Mission (SRTM) version 3.

California grows 95 percent of fruits and nuts in the United States. Tule fog, named after the tule grass wetlands in the area, has an important role in providing chill hours for agriculture in California’s Central Valley, shown below in Image A, but is this important fog dissipating? Researchers use data from the daily Terra and Aqua MODIS surface reflectance (MOD09GA, MYD09GA) products and Advanced Very High Resolution Radiometer (AVHRR) data to observe 33 years’ worth of fog in the valley. Read more to learn about their results and what it might mean for the future of agriculture in California.

Tapirs are elusive animals that tend to live in densely forested areas where there is little to no human interaction. Their natural nocturnal behavior makes it difficult for researchers to study these animals and learn more about where they exist. However, by using motion sensing cameras, satellite data, and the Global Human Footprint Index, researchers are able to study Malayan tapirs in Malaysia, Thailand, Myanmar, and Sumatra, Indonesia like never before. This story describes how researchers use data from the monthly Terra/Aqua combined MODIS burned area (MCD45A1) product as a proxy for areas of deforestation and thus areas tapirs would most likely avoid due to human interaction. They also use version 3 data NASA’s Shuttle Radar Topography Mission (SRTMGL1, SRTMGL3), shown in Image B below, to find dense jungle understory, where tapirs like to live, by examining the elevation and slope in the study area. Read more to learn about where they found tapirs and what their population size looks like in the area.

The Congo Basin comprises six countries and contains a quarter of the world’s tropical forest. Through precipitation monitoring and satellite data from 1950 – 2012, researchers have observed that the area has been in a drought since 1985. In this story researchers use the Terra MODIS Normalized Difference Vegetation Index (NDVI) data and Enhanced Vegetation Index (EVI) data from the Vegetation Indices Monthly Global (MOD13C2) product. An EVI image of the study area is shown in Image C below. They also use data from the Aqua MODIS Land Surface Temperature/Emissivity Monthly Global (MYD11C3) product and the Land Cover Type Yearly Global (MCD12C1) product. They use these data products to observe the impacts of long-term drought, which can last more than six months, and the health of the plants and trees in the area. Read more to find out what is happening in the Congo Basin and how MODIS and other satellites are being used to measure changes in the region.

Image A. The Tule Fog over California’s Central Valley as captured by a daily Terra MODIS surface reflectance image.

Image B. An elevation image of Man Kan, Myanmar is shown in this image created using NASA Version 3 SRTM data.