Two Sensors are Greater than One: Observing Drought with SMAP and MODIS 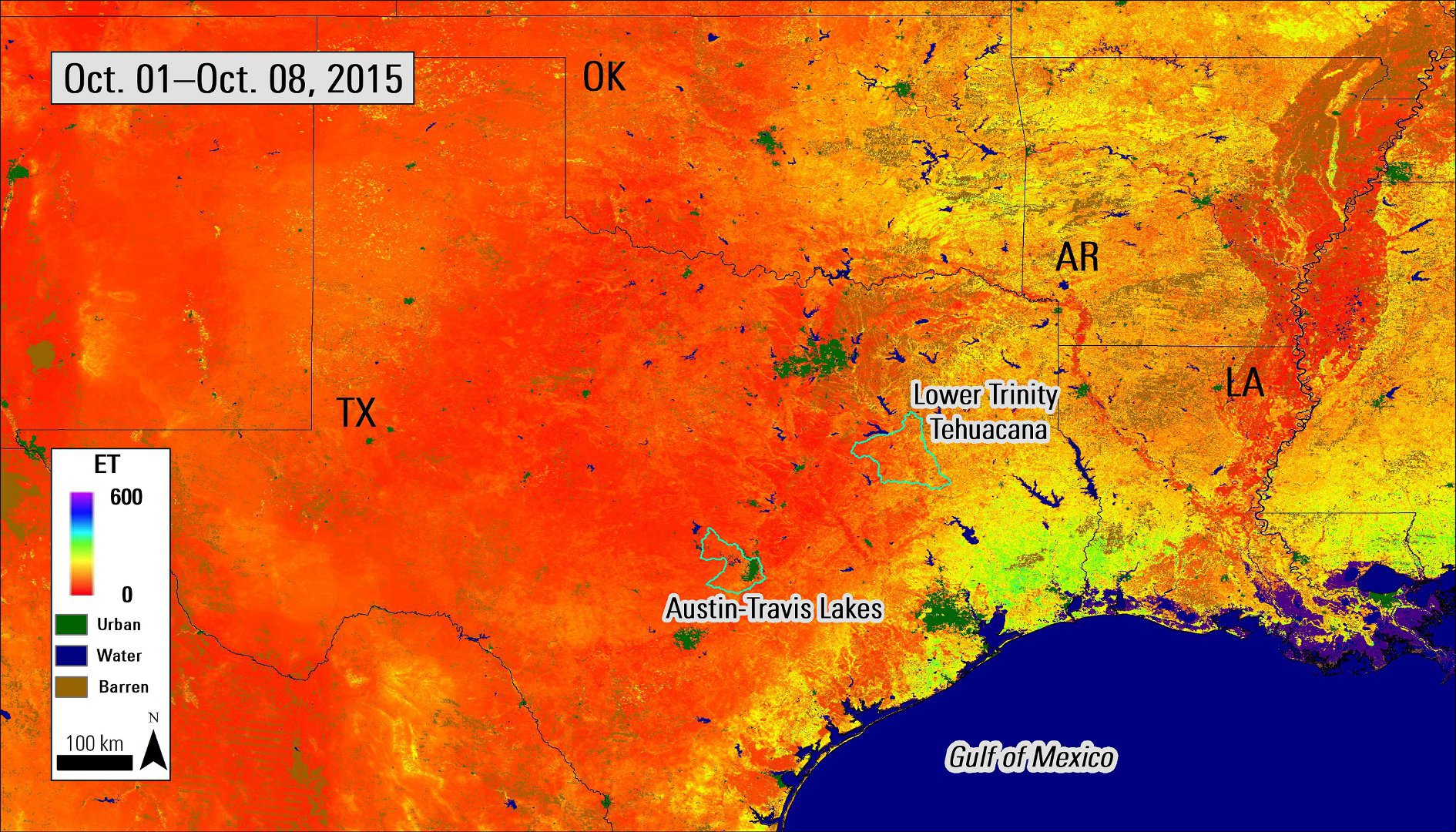 As temperatures continue to rise into the summer months of the Northern Hemisphere, farmers, ranchers, and land managers all undoubtedly will be keeping an eye to the sky for rain. Without precipitation, soil moisture decreases; subsequently crops wither, grasslands turn brown, and lakes begin shrinking, resulting in one of Earth’s worst natural disasters: drought. Economically speaking, droughts are devastating to the agriculture economy, causing a lack of available resources for ranchers and extensive damage to crops. One state that will be keeping a very close eye to the sky is Texas. In 2011, Texas suffered its driest year on record and the ensuing drought was linked to $7.62 billion in agriculture-related losses, with livestock losses alone topping $3.23 billion. While the state did see some relief with the arrival of Hurricane Harvey in October 2017, by the end of May 2018, over two thirds of the state again experienced drought conditions.

Early warning systems and drought monitoring tools are essential to manage the impact of water scarcities and minimize drought losses. While precipitation is considered the best observed hydrologic variable, scientists also will be using “eyes in the sky,” or satellite sensors, to monitor the land surface. Remote sensing data are important because there are useful drought-indicating parameters besides precipitation that can be measured from space, including evapotranspiration (ET), vegetation indices, land surface temperature (LST), and soil moisture.

One of the least measured variables for understanding drought at large spatial scales is soil moisture. Soil moisture also may be one of the most important, as it combines responses of previous moisture, recent precipitation, and the ability of the soil and vegetation to retain moisture. One recent study by Velpuri et. al (2016) demonstrated the use of Soil Moisture Active Passive (SMAP) data for drought monitoring in the rangelands of Oklahoma and Texas by comparing SMAP soil moisture with precipitation data, modeled evapotranspiration, and Moderate Resolution Imaging Spectroradiometer (MODIS) land surface temperature data. The goal of the SMAP mission is to provide global mapping of soil moisture and freeze/thaw state with unprecedented resolution, coverage, and accuracy.

In the image below (Image 1) the AppEEARS Extract Area Sample form shows a request for the (hydrologic unit class) HUC-8 sub-basin level for two of the majority-rangeland watersheds used in the Velpuri et. al (2016) study. The interactive data visualizations that AppEEARS provides are shown in Images 2–4. In addition to the interactive data visualizations, results from AppEEARS can be output as GeoTIFF or NetCDF-4 files for each data layer and area of interest. Several .csv files containing summary statistics such as mean, range, and standard deviation, grouped by region of interest, product, and observation also are provided as output.

A drought occurred during the period of the Velpuri et. al (2016) study. The Terra MODIS Evapotranspiration composite image (above right) shows very low evapotranspiration over much of the study region in shades of orange-red in October 2015. Below, notice in Images 2-4 from around July 2015 to October 2015 (shown in red), that SMAP soil moisture and Terra MODIS ET are lower, compared with Terra MODIS LST which is higher, when compared with the July-October time frame in 2016 and 2017. When comparing SMAP soil moisture with ET in AppEEARS, a strong positive relationship can be seen by comparing Images 2 and 3 below. Also, SMAP soil moisture demonstrates a negative relationship with Terra MODIS LST which can be seen by comparing Images 3 and 4 below, where higher LST values correlate with lower soil moisture values in general. Higher land surface temperatures can be both a cause and a symptom of low soil moisture, as higher temperatures lead to decreased soil moisture, and drier soil can more easily reach higher temperatures.

(Author's Note 5/15/2020: At the time of publishing Combined MODIS Land Cover Version 5 data was available. This data has since been decommissioned. Users are encouraged to use the Version 6 product: https://doi.org/10.5067/MODIS/MCD12Q1.006) 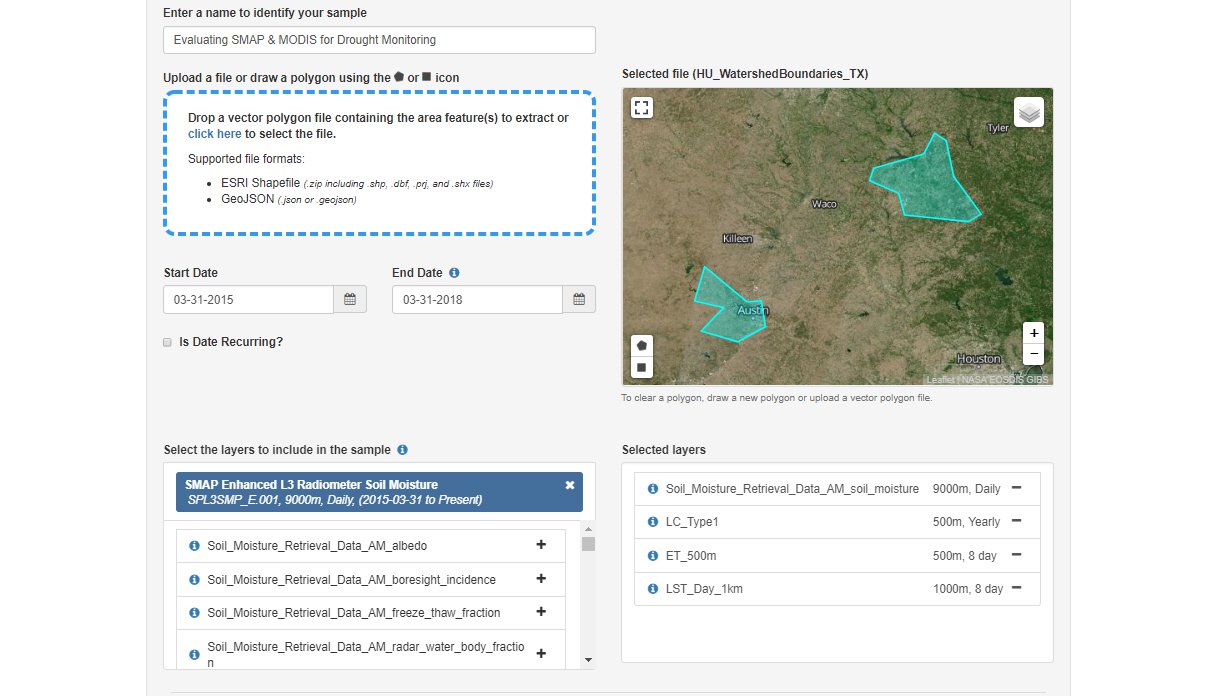 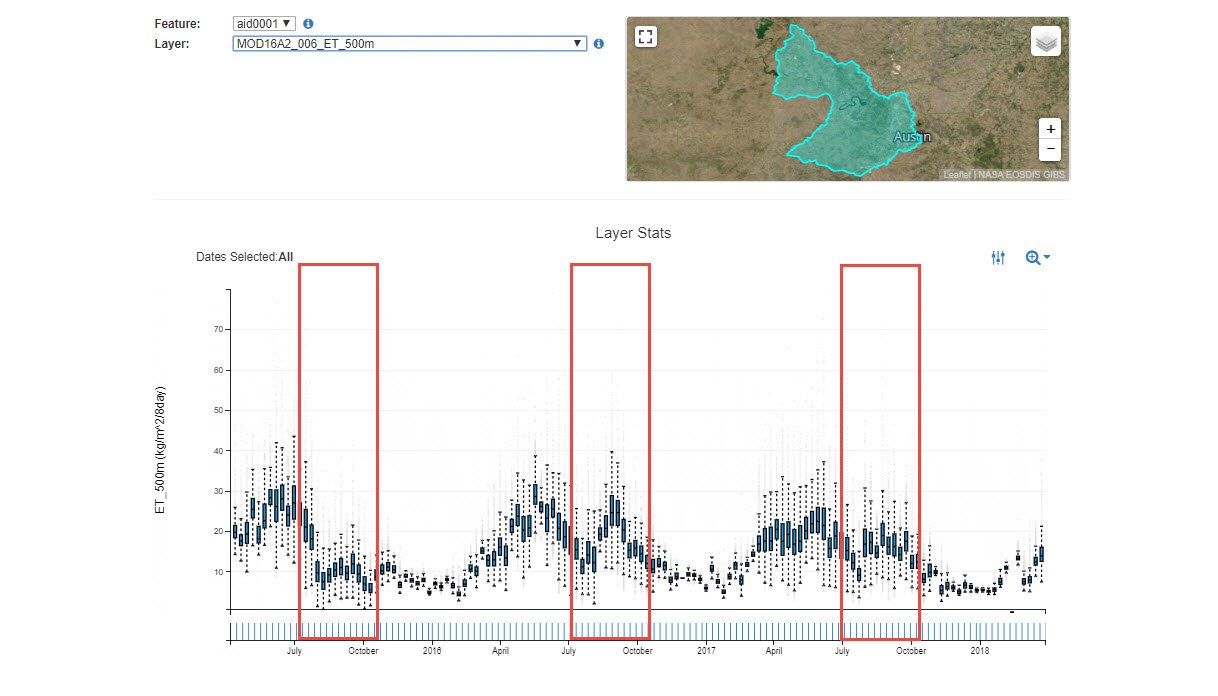 Example of AppEEARS boxplot time series showing low Terra MODIS Evapotranspiration (ET) (MOD16A2.006) from around July to October 2015, likely due to drought conditions in the Austin-Travis Lakes HUC-8 unit. Notice the differences in ET from July-October 2015 vs. July-October 2016 and 2017. 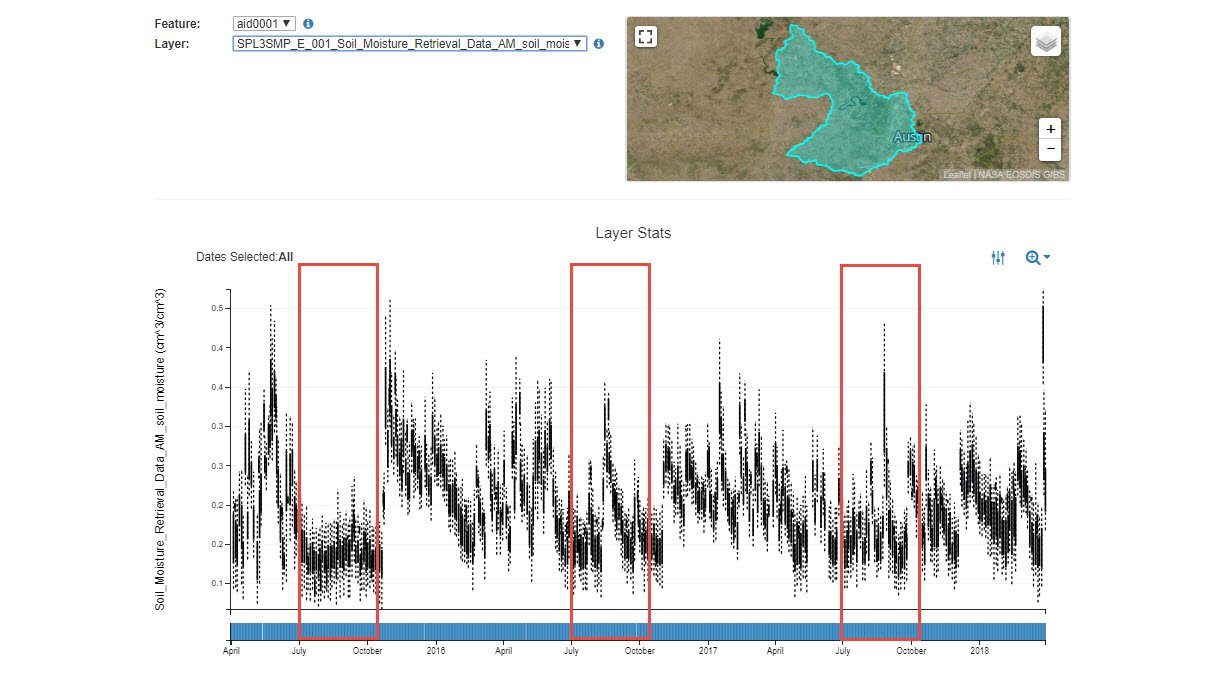 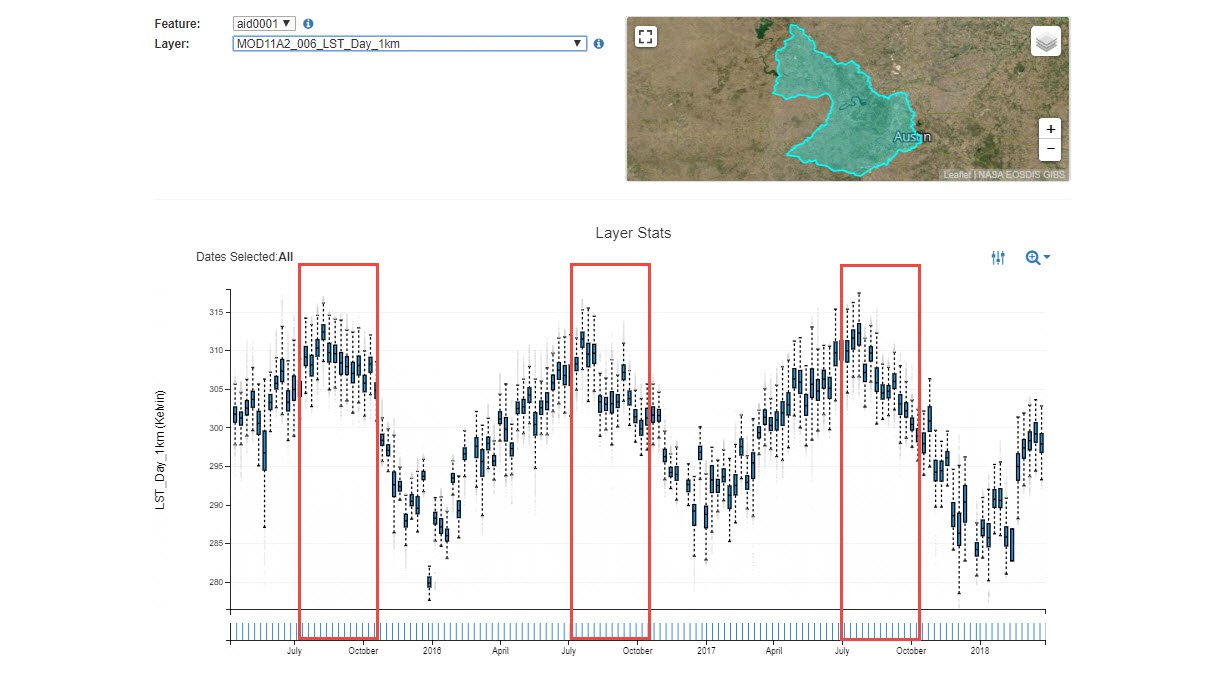 Example of AppEEARS boxplot time series showing high Terra MODIS Land Surface Temperature (MOD11A2.006) from around July to October 2015, which helped to cause drought conditions in the Austin-Travis Lakes HUC-8 unit. Notice the differences in LST from July-October 2015 vs. July-October 2016 and 2017.