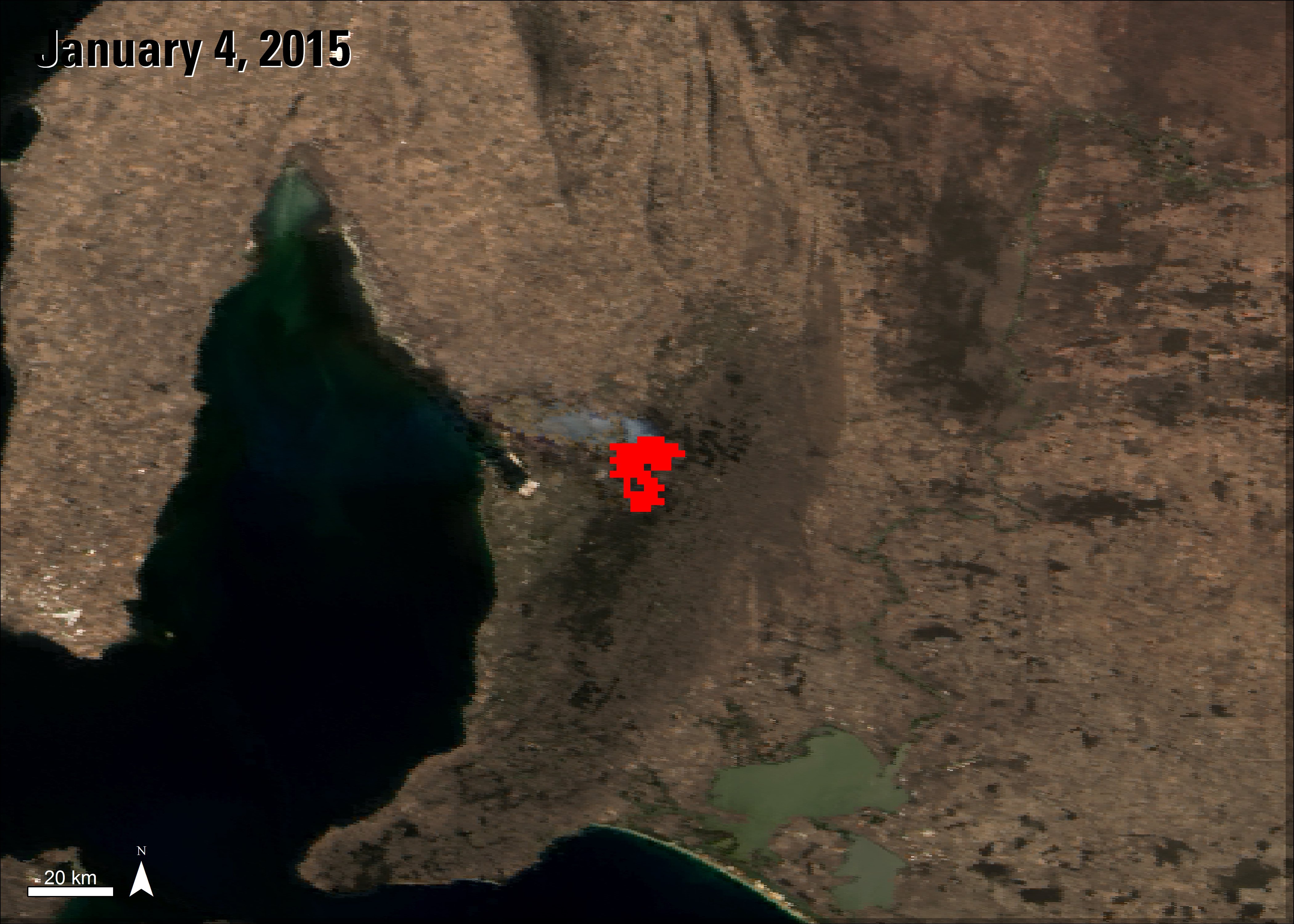 The Sampson Flat bushfires in South Australia are identified as red in this MODIS image featuring an 8-day composite of the Thermal Anomalies and Fire product (MOD14A2) overlaid on a base image of a surface reflectance image (MYD09GA) from January 4, 2015. The surface reflectance image was captured two days after the fires started. In this image you can see the smoke from the fires.

Using satellite imagery, emergency teams can observe fire patterns, durations, and burn scars in an area to help prevent, manage, and predict fires. The Land Processes Distributed Active Archive Center (LP DAAC) distributes several Aqua and Terra Moderate Resolution Imaging Spectroradiometer (MODIS) products that can aid in the identification of fires. The MODIS Thermal Anomalies and Fire (MOD/MYD14) data products highlight active fires in an area. One of the products provides locations of daily fires (MOD14A1), and another provides a composite of fires that occurred in the region within an 8 day period (MOD14A2). These products can be useful in monitoring the location and size of wildfires, track where fires have spread, and even help predict where they could spread. These products, along with a monthly product that shows burned areas (MCD45A1), can assist in surveying past and current fires in an area.

MODIS Fire products are useful for areas that are prone to wildfires, like the country of Australia. Earlier this year the state of South Australia experienced several bushfires in the Sampson Flat area of the Adelaide Hills. A bushfire is a fire that typically spreads rapidly in scrub vegetation or forested areas. The Sampson Flat fires lasted from January 2 – 9 and burned more than 120 square kilometers (approximately 46 square miles) of land, destroying 27 homes, and causing $13 million AUD (approximately $9 million USD) worth of damage. The fires were significantly reduced with the help of rainfall in the region and eventually controlled. Authorities declared these fires to be the worst fires in the Adelaide Hills area during the past 30 years. Fires identified in the area during the time period of January 1 – 8, 2015, are depicted in the image on the right.

While Australia has already had many fires throughout 2015, according to the Australian Government’s Cooperative Research Centres Programme, fire activity during the fire danger season from November 2015 to April 2016 is predicted to be above normal in many parts of the country. The increase in predicted fire activity is attributed to many factors, including El Niño and the warming of ocean and sea temperatures, significantly lower average rainfalls in some areas over the last 10 years, and record breaking temperatures throughout the year in many parts of the county. Many of these factors are causing drier soil and vegetation in the region, which can easily ignite.

By the beginning of October, before the fire danger season officially started, the southeastern Australian state of Victoria had already experienced 160 bushfires. One of the fires near Lancefield, Victoria, featured in the image below, began as a controlled burn and became uncontrolled on a windy day. The fire went on to burn 40 square kilometers (approximately 15 square miles) and impacted properties and the lives of residents in the area. As the fire season continues to develop, officials and scientists can keep an eye on fires using the MODIS products mentioned above and other data sources. 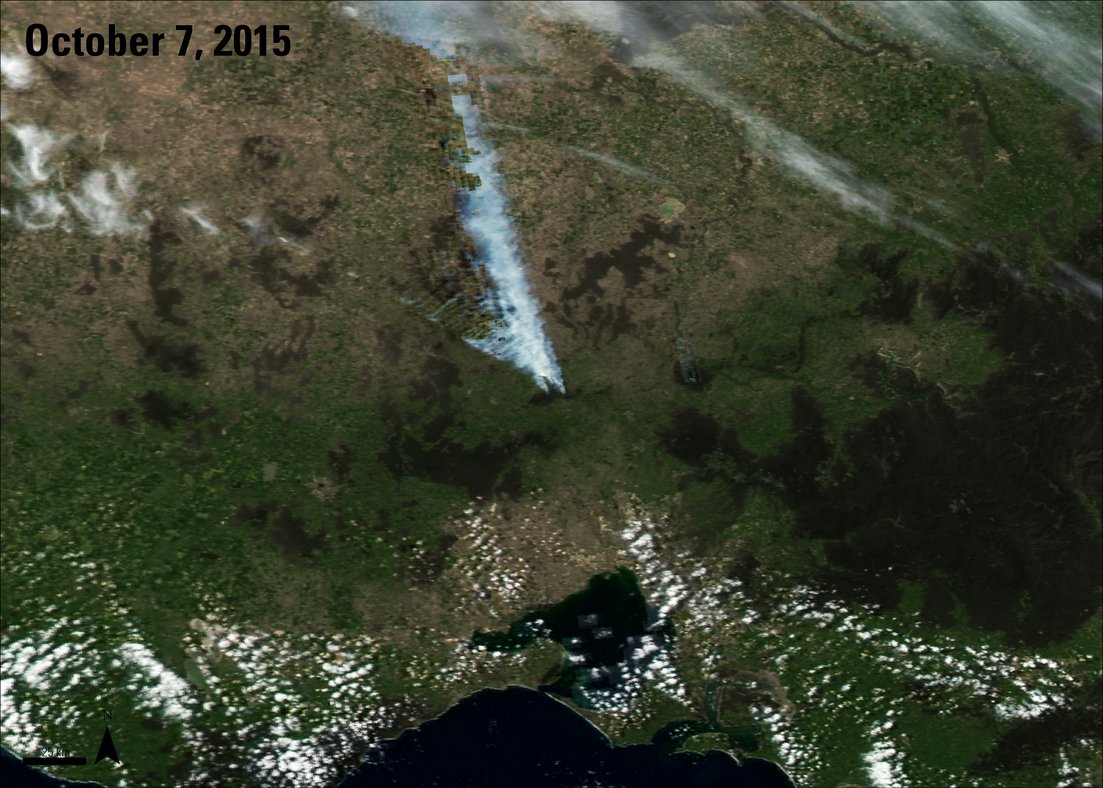 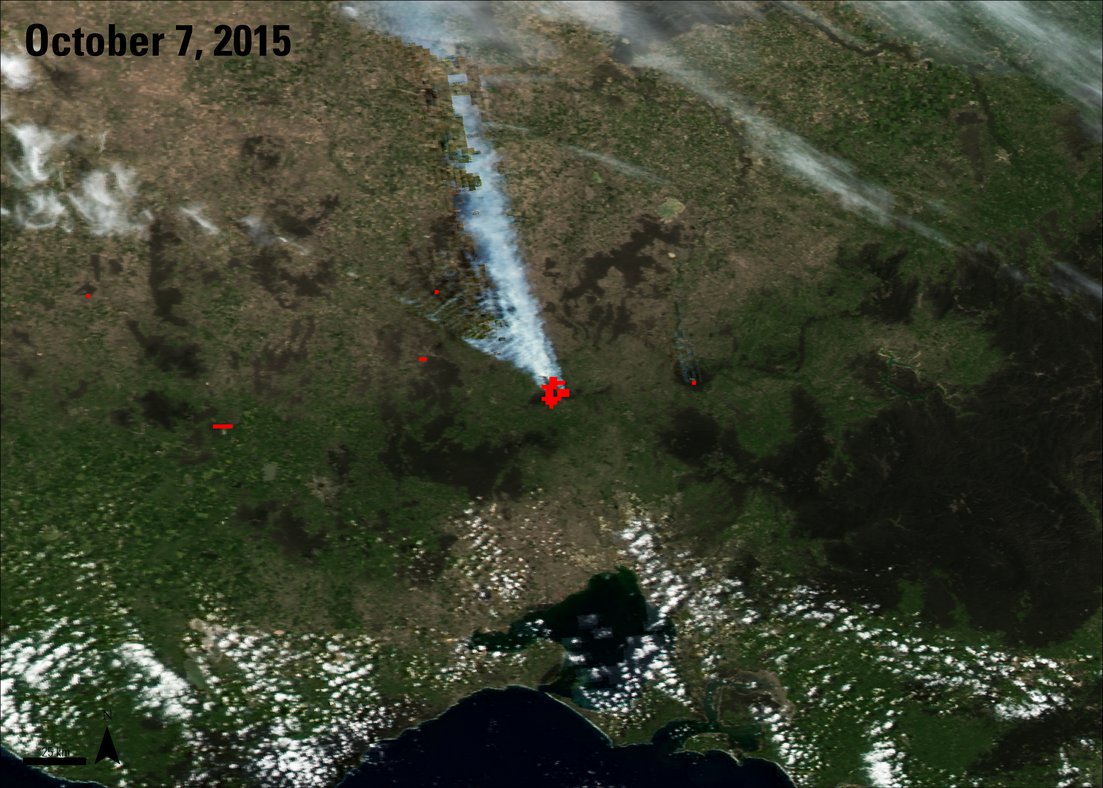 Use the slider to identify where fires occurred in the southeastern Australian state of Victoria in early October. The image on the left shows a true color composite of the area that Aqua MODIS daily surface reflectance (MYD09GA) captured on October 7, 2015. The image on the right, after the slider, reveals a red color identifying fires in the area from the 8 day period of September 30 – October 7, 2015 using the Thermal Anomalies and Fire product (MOD14A2) product.