(Author's Note 5/15/2020: At the time of publishing these references were available online, some resources may no longer be available.) 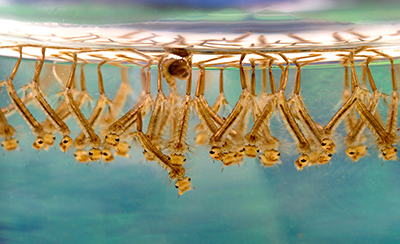 Larvae of Culex mosquitoes in standing water. James Gathany/CC BY 2.5

West Nile virus (WNV) is transmitted to humans by mosquitoes of the Culex genus. Infected mosquitoes transmit WNV to humans through biting during a blood feeding process, which most often occurs from dusk till dawn, both indoors and outdoors. With the rapid spread of WNV in North America since 1999, public health studies have increasingly monitored the environmental parameters and climate patterns associated with the transmission cycle to generate maps and models to forecast disease risk. Satellite-derived remotely sensed data provide an ever-closer and more comprehensive understanding of the complex relationships between health and the environment.

WNV is a complex disease that is sustained in nature through a mosquito-bird-mosquito transmission cycle, whereby each reservoir host (bird) and vector (mosquito) is influenced by varying environmental, socio-economic, and climate conditions. Human risk to WNV is therefore heavily influenced by habitat suitability for both birds and mosquitoes, which varies geographically and seasonally according to changing conditions.

Over the past decade, environmental parameters derived from satellite remote sensing have been widely used to assess the risk of mosquito-borne illnesses on a global scale. For instance, Ting-Wu Chuang and others (2012) apply Terra Moderate Resolution Imaging Spectroradiometer (MODIS) Land Surface Temperature (LST) (MOD11A2) and Normalized Difference Vegetation Index (NDVI) (MOD13Q1) data as environmental predictors in a model of WNV risk in the Northern Great Plains. They found that WNV was sensitive to NDVI and LST variability and stated their importance as relevant environmental indicators for transmission risk. NDVI, a measurement of vegetation greenness, is important as it could be an indicator of environmental conditions suitable for mosquito breeding sites that include stagnant bodies of water in soil, vegetation, streams, etc. Liu and others (2012) found LST to be positively correlated with WNV transmission, whereby areas with relatively lower LST were more resistant to WNV dissemination. This finding is potentially due to the association of LST with migration patterns, habitat conditions, and disease incubation periods.

Given their known importance in the WNV transmission cycle, a visual analysis of patterns in LST and NDVI compared to reported cases is demonstrated for Larimer County in Colorado. According to the Center for Disease Control’s WNV Disease Map, Larimer County reported 89 WNV cases in 2013, which then fell to 18 cases in 2014, and subsequently, 17 cases in 2015. To identify temperature ranges in Larimer County from 2013–2015, daytime MODIS LST data are displayed using the Application for Extracting and Exploring Analysis Ready Samples (AppEEARS) (see graphs below). June–July 2013 experienced a higher maximum LST (123 degrees Fahrenheit) compared to 2014 (112 degrees Fahrenheit) and 2015 (114 degrees Fahrenheit). Higher LST values during these months in 2013 could have potentially influenced the spike in reported cases in the following month of August 2013 across Colorado, a spike that did not occur in August 2014 and 2015 following slightly lower temperature ranges in June–July 2014 and 2015. This association is identified using AppEEARS, as it provides a simple visualization of how LST fluctuated over this period of time when reported WNV cases in Larimer County decreased.

NDVI values for Larimer County across 2013–2015 are also displayed below. August 2013 experienced lower minimum and higher maximum values (-0.04 to 1.0) when the number of reported WNV cases in all of Colorado increased, compared to more moderate variability experienced in August 2014 and 2015 when fewer cases were reported. Comparably, increased variability in minimum and maximum NDVI values occurred earlier in the year in May 2014 and 2015 instead. These differing patterns in NDVI could signify changes in precipitation, temperature, natural disasters, or other phenomena that could affect the environmental suitability of WNV vectors and hosts. Further examination is needed to identify associations; however, the visual analysis in AppEEARS is a useful preliminary step to building a WNV risk model because it provides a broad overview of environmental trends or anomalies during a time period when WNV cases are reported. 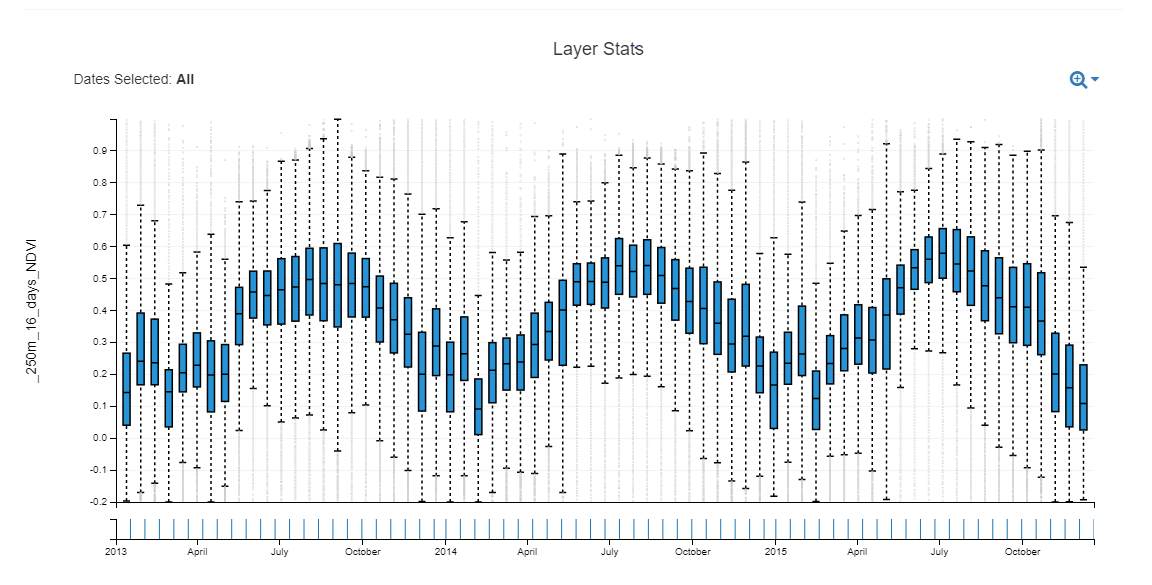 Example of using AppEEARS to identify patterns in Terra MODIS NDVI data for Larimer County, Colorado from 2013–2015. This information can be compared to known reported WNV cases over time to identify potential associations. 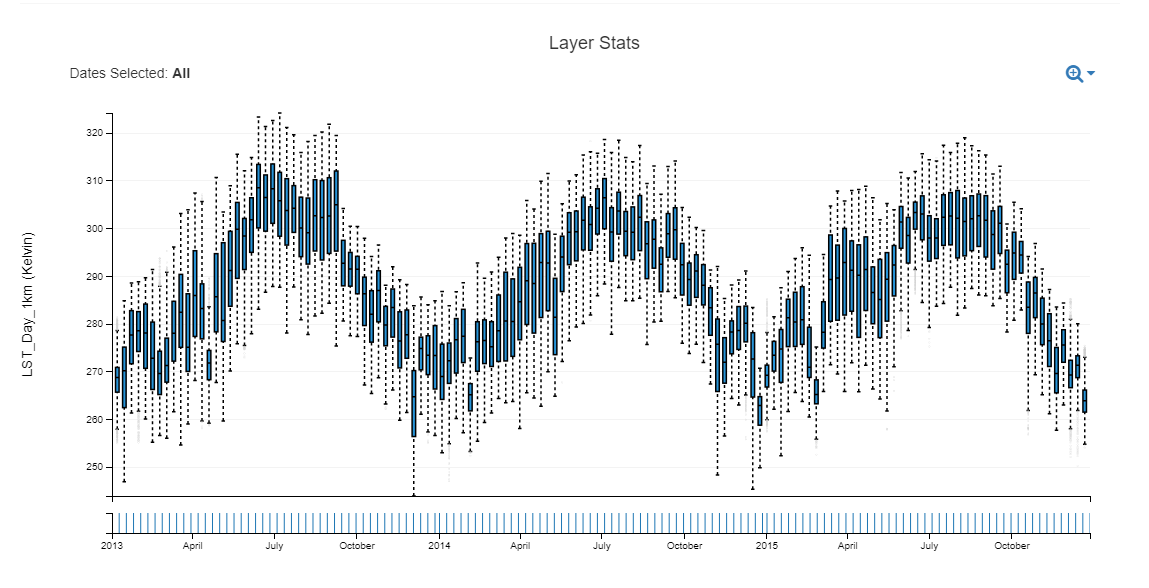 Example of using AppEEARS to identify patterns in Terra MODIS LST data for Larimer County, Colorado from 2013–2015. This information can be compared to known reported WNV cases over time to identify potential associations.