February 24, 2015 marks the fifteenth anniversary of the first data imaged from the Terra Moderate Resolution Imaging Spectroradiometer (MODIS) instrument. The MODIS sensor was launched aboard Terra on December 18, 1999, and on February 24, 2000, the “first light” image was acquired of the Mississippi River Delta.

Initially designed for only a 6 year mission, the extended life has allowed Terra MODIS to continue to collect valuable data about the Earth’s systems and the relationships between its processes. This extended depth of the time series of MODIS data only adds to its value and solidifies the vital role it plays in understanding our planet.

Since "first light", MODIS has processed several collections including V001 (beta), V003 (provisional), and V004 (validated) data, V005 (validated), and is planning to release V006 in 2015 to continue supporting improved understanding of the Earth system.

This image of the Mississippi Delta was acquired on February 24, 2000 and is one of the first scenes acquired by the

Moderate resolution Imaging Spectroradiometer (MODIS) on the EOS-Terra Spacecraft. It covers an area of 100km by 100km over New Orleans, Louisiana and the Gulf of Mexico. 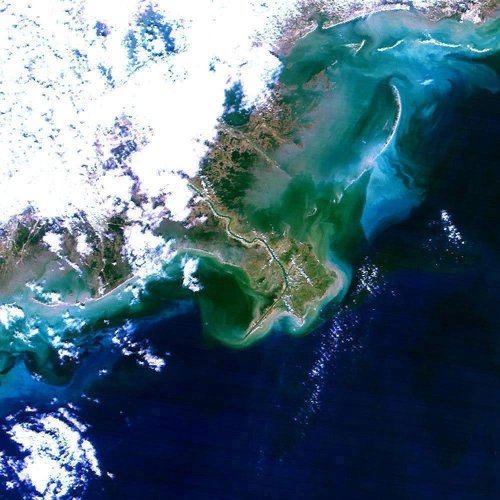