ASTER SWIR detectors are no longer functioning due to anomalously high SWIR detector temperatures. ASTER SWIR data acquired since April 2008 are not useable, and show saturation of values and severe striping. All attempts to bring the SWIR bands back to life have failed, and no further action is envisioned. VNIR and TIR data continue to show excellent quality, meeting all mission requirements and specifications.

LP DAAC offers nearly 1.5 million global ASTER Level 1A scenes and related on-demand products. The vast majority of these scenes were acquired prior to the SWIR detector temperature increase, and SWIR bands present may be used in investigations.

No further alerts are anticipated regarding the SWIR detector temperature situation.

As previously reported, the ASTER SWIR detector temperature rose precipitously on April 23, 2008, and SWIR data saturation occurred. The SWIR recycling procedure initiated on May 7, 2008 was not successful in lowering the SWIR detector temperature. Users are advised that ASTER SWIR data acquired from late April to the present exhibit anomalous saturation of values and anomalous striping. Cloud cover assessment and TIR location accuracy have also been affected. The data quality impacts referenced in the April 9, 2008 alert still apply for the periods specified. Earlier archived data conform to mission specifications.

The ASTER Team is reviewing actions that might be taken in response to this situation. Additional advisories will continue to be provided.

Users are advised that ASTER SWIR data acquired in late April and early May 2008 exhibit anomalous saturation of values and anomalous striping. Cloud cover assessment and TIR location accuracy have also been affected by the present situation.

Since January 2008, SWIR performance has been stable and data quality has been nominal. On April 23, 2008, the SWIR detector temperature rose precipitously, and SWIR Bands 5-9 saturated.

In an attempt to lower the SWIR detector temperature and improve data quality, the ASTER Team plans to commence another SWIR recycling procedure on May 7, 2008. If successful, stable SWIR performance and nominal data quality will be restored.

The data quality impacts referenced in the April 9, 2008 alert still apply for the periods specified.

Additional advisories will continue to be provided.

This advisory is written to users of ASTER SWIR data to alert them to the fact that some anomalous saturation of values has been observed in ASTER Bands 5 through 9 beginning May 2007. In addition, radiometric offset errors of up to 10 DN have been observed in these bands for data acquired between September 2007 and January 2008, resulting in noticeable imaging striping for some scenes. These problems are attributed to an increase in ASTER SWIR detector temperature believed to be caused by increased thermal resistance in the SWIR cryocooler. VNIR and TIR bands are unaffected by this problem. 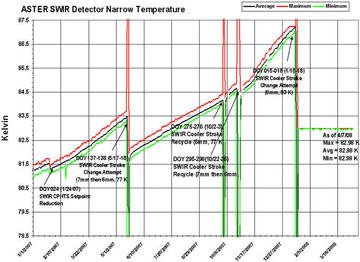 Figure 2 shows an example of SWIR saturation in an extremely bright desert scene acquired over northern Africa in August 2007, when the detector temperature was at about 83.5K. Saturation is especially prevalent in Bands 5, 6, and 7. Saturated pixels with DN = 255 are displayed in black. All other colors are unsaturated pixels.

Figure 3A shows an example of image striping that results from the radiometric offset error described above. While it is not possible to apply any correction to reverse the image saturation anomalies in the SWIR, it is possible to correct the radiometric offset errors and eliminate the anomalous image striping. Figure 3B shows the effects of applying updated radiometric correction coefficients to the SWIR data collected when the detector temperature exceeded 84K.

ASTER GDS has initiated a 6-month effort to reprocess ASTER data collected between September 2007 and January 2008, when the detector temperature exceeded 84K. The LPDAAC will sequentially replace existing data acquired during this period with data newly corrected for radiometric offset and with anomalous striping removed as they are received from ASTER GDS. 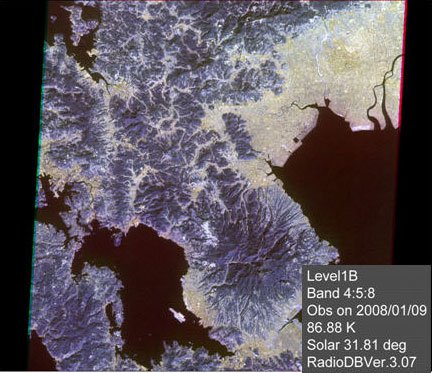