(Author's Note 2/18/2022: At the time of publishing these references were available online, some resources may no longer be available.) 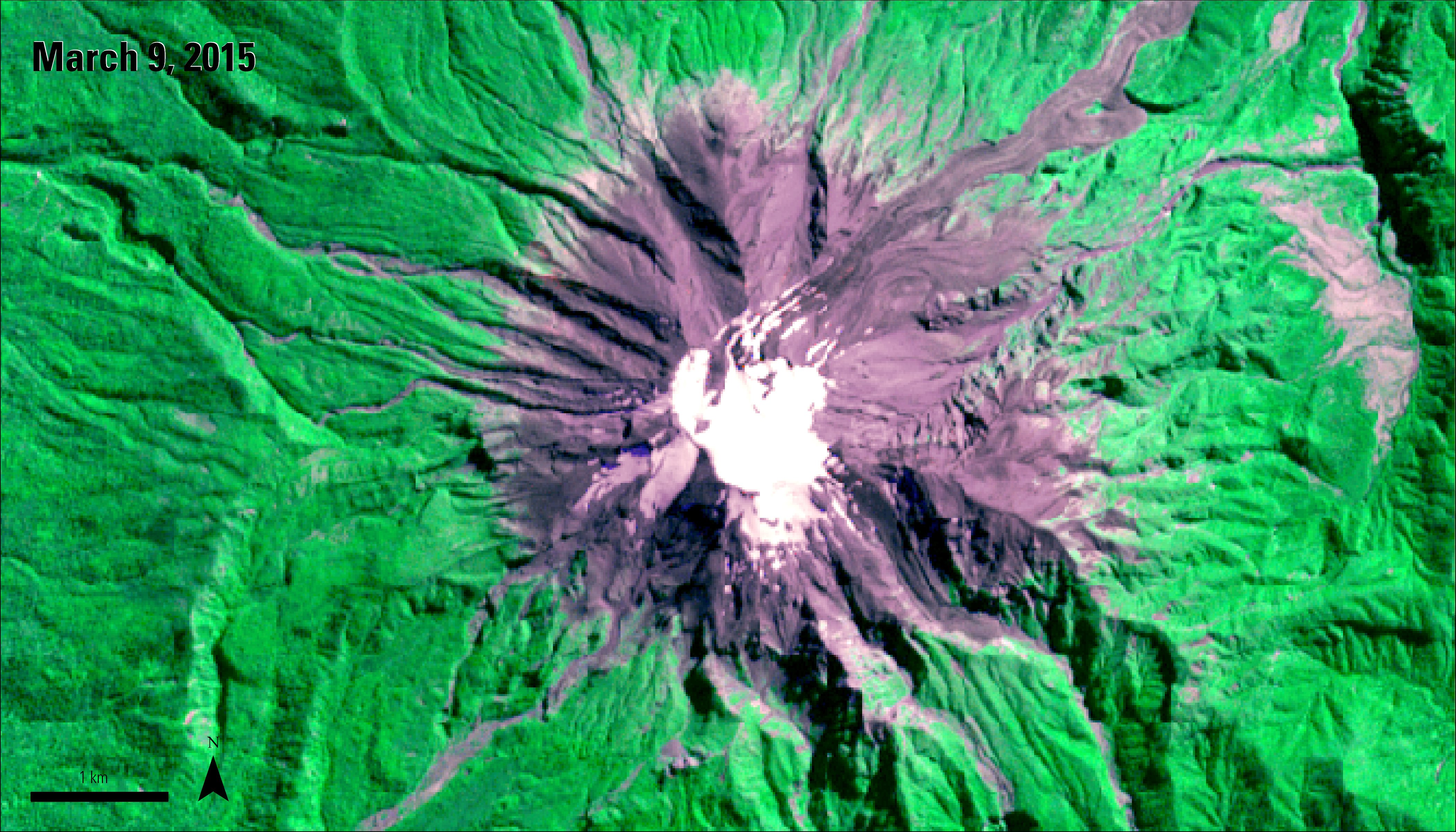 A color infrared ASTER VNIR image (AST14OTH) of Calbuco captured on March 9, 2015, a few weeks before the recent period of volcanic eruptions.

The Calbuco volcano, located in the Los Lagos region of Chile, is a stratovolcano that has a height of 2,003 meters (6,571 feet) above sea level, a base width of 16.5 kilometers (10.2 miles), and a 400- to 500-meter-wide (1,312.34 – 1,640.42 feet) crater. The Advanced Spaceborne Thermal Emission and Reflection Radiometer (ASTER) recently captured an image of the Calbuco volcano in early March 2015 (left). ASTER imagery is often used to monitor and observe natural disasters due to its ability to capture an image of an area during a specific time period.

In April 2015, Calbuco experienced volcanic activity for the first time since 1972, and its most recent major eruption since 1961. On April 22, 2015, Chile’s National Service of Geology and Mining (Sernageomin) and its Volcano Observatory of the Southern Andes (OVDAS) changed Calbuco’s alert level status from the green “Normal” status to the red “Warning” status, indicating an eruption was imminent. This warning prompted an evacuation of nearby towns within a 20-kilometer (12.4 miles) radius of the volcano crater. Within 15 minutes of changing the warning status, the volcano erupted at 6:05 pm local time. The eruption lasted for 90 minutes and produced a plume of ash and smoke that reached more than 15 kilometers (9.3 miles) in height. Seven hours later during the early morning hours of April 23, 2015, Calbuco experienced an even larger eruption that lasted for 6 hours and produced another plume that reached a height of more than 15 vertical kilometers (9.3 miles). On April 30, 2015, the volcano erupted for a third time and generated a plume approximately 4 kilometers (2.4 miles) high. 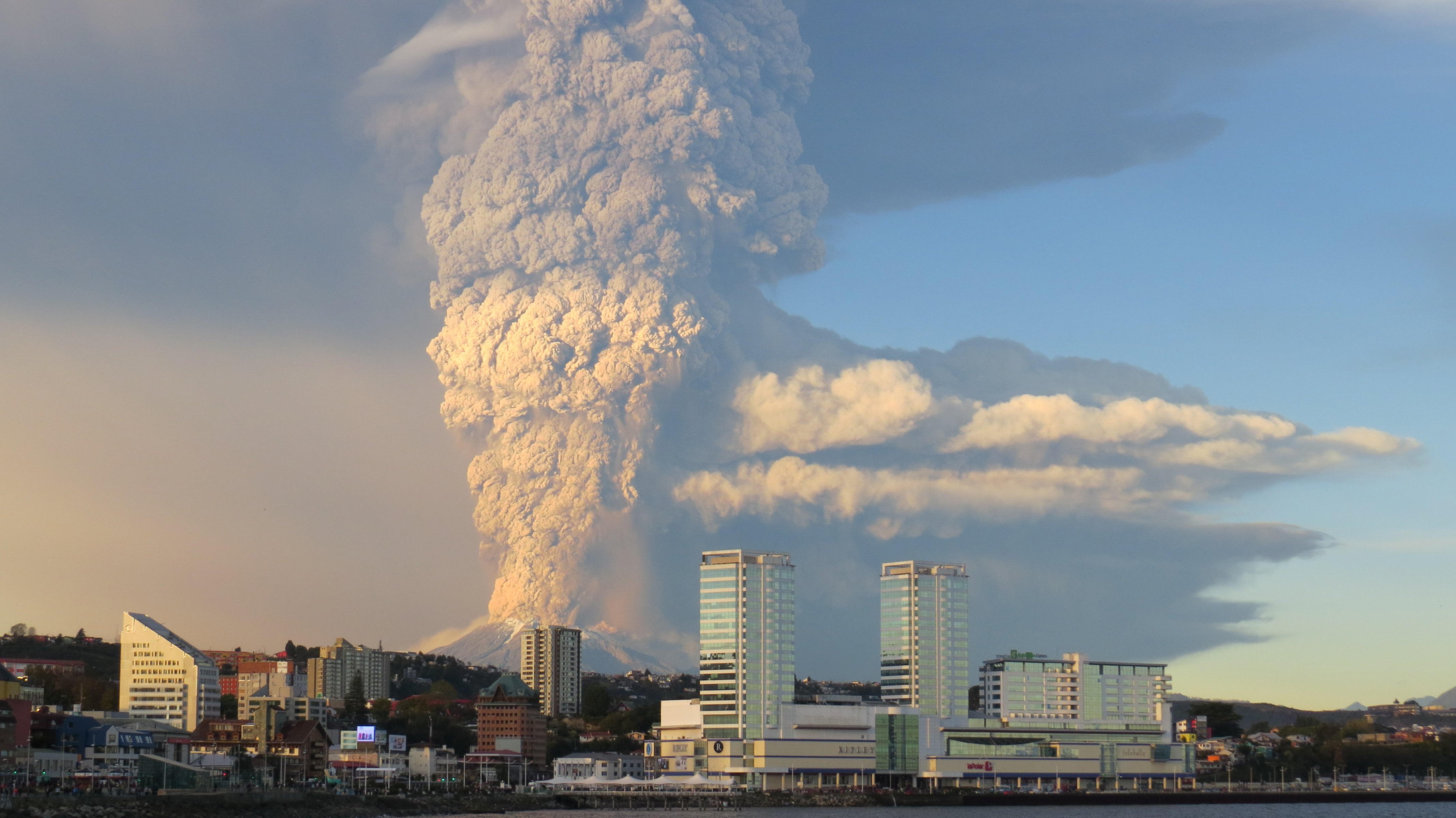 The Calbuco volcano eruption and plume shown behind the city of Puerto Montt on April 22, 2015.

The Moderate Resolution Imaging Spectroradiometer (MODIS) instrument on NASA’s Aqua satellite captured a clear view of the surface reflectance (MYD09GA) of Calbuco and its plume just 2 days after the initial eruption. Due to its frequent revisit time and relatively large imaging area, MODIS is an advantageous tool for use in monitoring natural disasters and their impacts.

The ash from the first two eruptions blanketed surrounding areas, including the town of Puerto Montt, shown in the center of the MODIS image to the left, which is located 30 kilometers (18.6 miles) from the volcano. The ash caused damage to homes, businesses, fisheries and farms in the area. These eruptions prompted a state of emergency in Chile and displaced over 6,900 people. 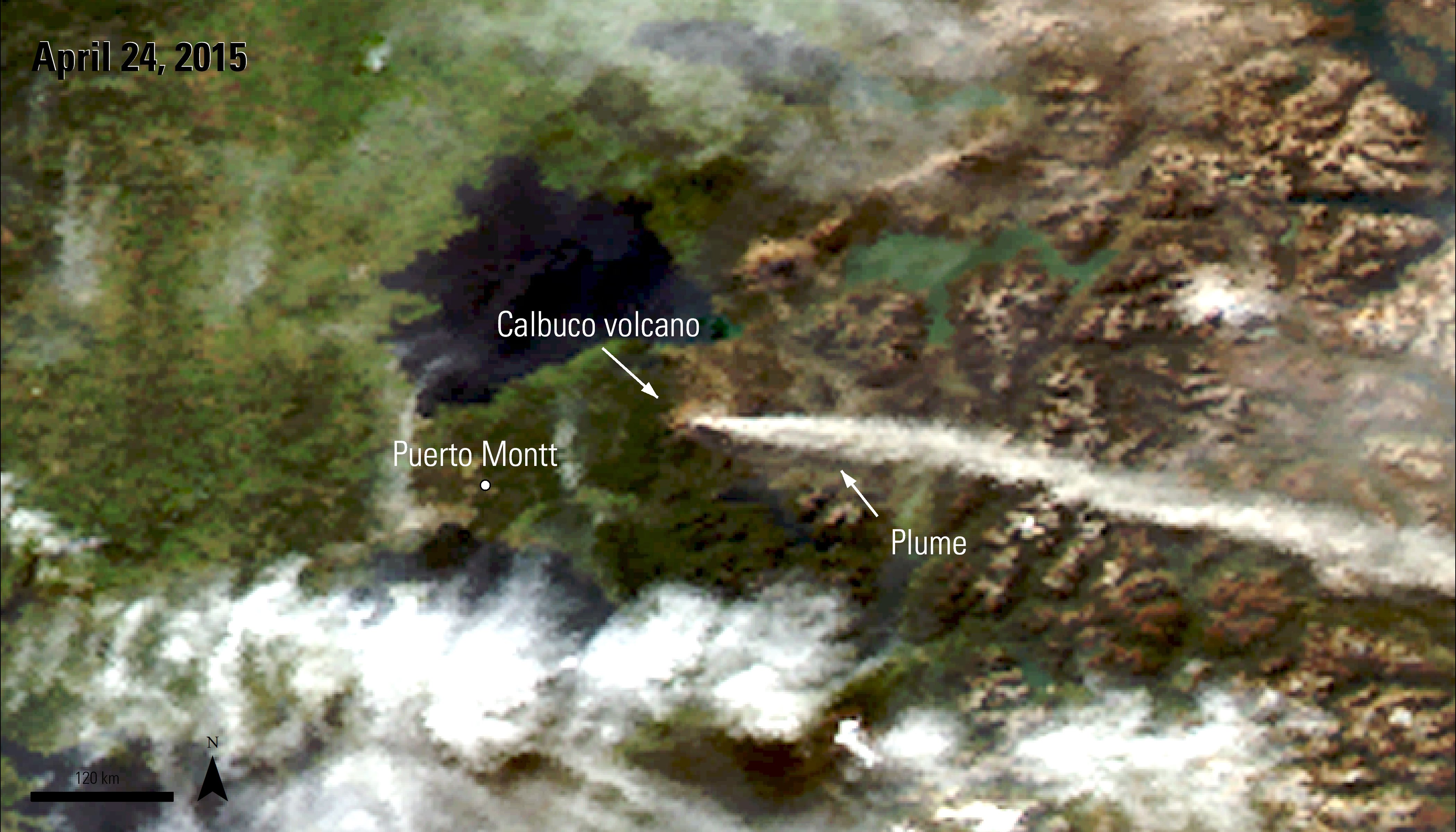 In comparison, the 1961 eruption produced a plume 12-15 vertical kilometers ( 7.4-9.3 miles) in height, a pyroclastic flow (a combination of hot gas, ash, pumice rock and other rock fragments formed during an eruption), and a lava flow. Between May 1 and May 3, 2015, a plume less than 1 kilometer (3,280.84 feet) in height was visible at the crater. The volcano remained at a red (warning) status until May 18, 2015. On May 19, 2015, the 20-kilometer restriction was removed as the volcano alert status was downgraded to an orange, “Watch” status due to a gradual decline in interior volcanic activity. However, because southern Chile is in its rainy season, heavy rains could cause pyroclastic flows to occur at the volcano’s crater and produce mudflows in areas where volcanic ash has fallen. Fortunately, no reports of deaths or injuries have been associated with these recent eruptions.