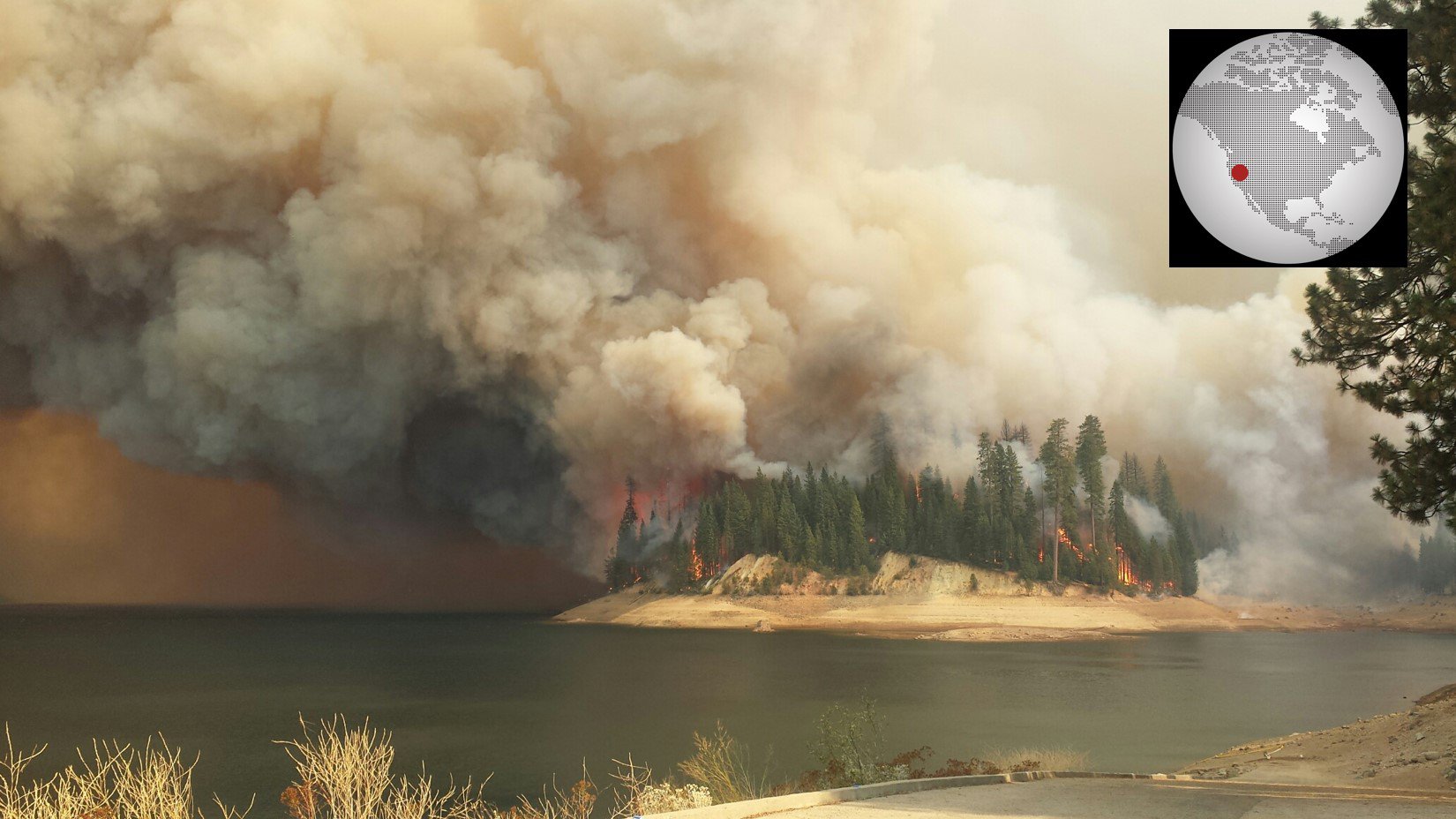 Over the past 70 years, the percentage of wildland fires caused by people has remained unchanged in the U.S. Today about 90% of wildland fires are caused by people. Unattended campfires, discarded cigarettes, or intentional acts of arson are the primary cause of these fires. A recent example is the King Fire, which was intentionally started on September 13, 2014, in El Dorado National Forest near Pollock Pines, CA. The King Fire burned 39,324 hectares (97,717 acres) of forested land within the El Dorado and Tahoe National Forests, located in El Dorado and Placer Counties, before it was declared contained on October 9, 2014.

Below are two images of the King Fire that were acquired by the Moderate Resolution Imaging Spectroradiometer (MODIS), which flies aboard NASA’s Terra satellite. These MODIS images were captured on September 17, 2014, four days after the King Fire was reported. In both images the fire perimeter is outlined in black. The left image is a MODIS Daily Surface Reflectance product (MOD09GA) with a spatial resolution of 500 meters. This false-color image depicts vegetated areas as green, bare ground as red-pink, and active fire as bright red. The right image is a MODIS Thermal Anomalies and Fire, Daily, 1-kilometer product (MOD14A1). The MOD14A1 products detect active fires when size and temperature thresholds are sufficient to be detected. This image has four classes: land (green), water (dark blue), clouds (light blue), and active fire (red). The smoke from the fire drifted north; at the top of the image, the smoke built up and the MOD14A1 product classified the smoke as a cloud.

The King Fire is a reminder that forest fires can be prevented. About a month before the King Fire started, Smokey Bear celebrated his 70th birthday on August 9, 2014. Smokey Bear is the face of the longest-running public service campaign in U.S. history. Smokey Bear was created in 1944 during World War II when many experienced firefighters were engaged at war. The protection of U.S. forests became a major concern due to the absence of able bodied personnel needed to fight forest fires. In response, the U.S. Forest Service, the National Association of State Foresters, and the Advertising Council created Smokey Bear in an effort to raise awareness on preventing forest fires. 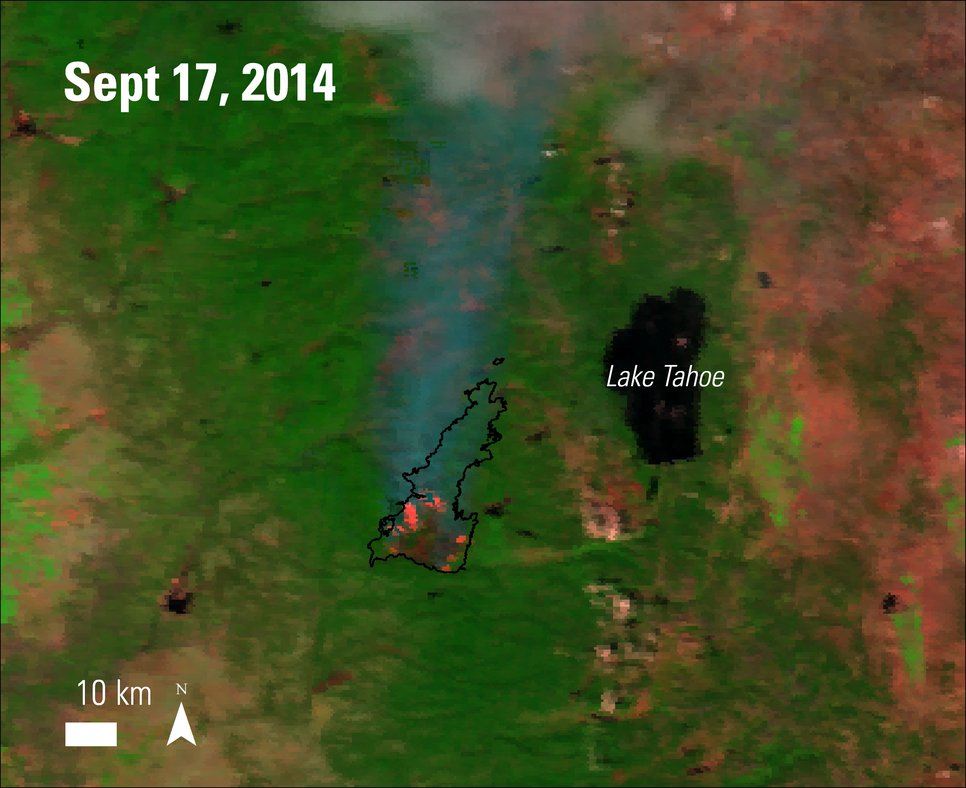 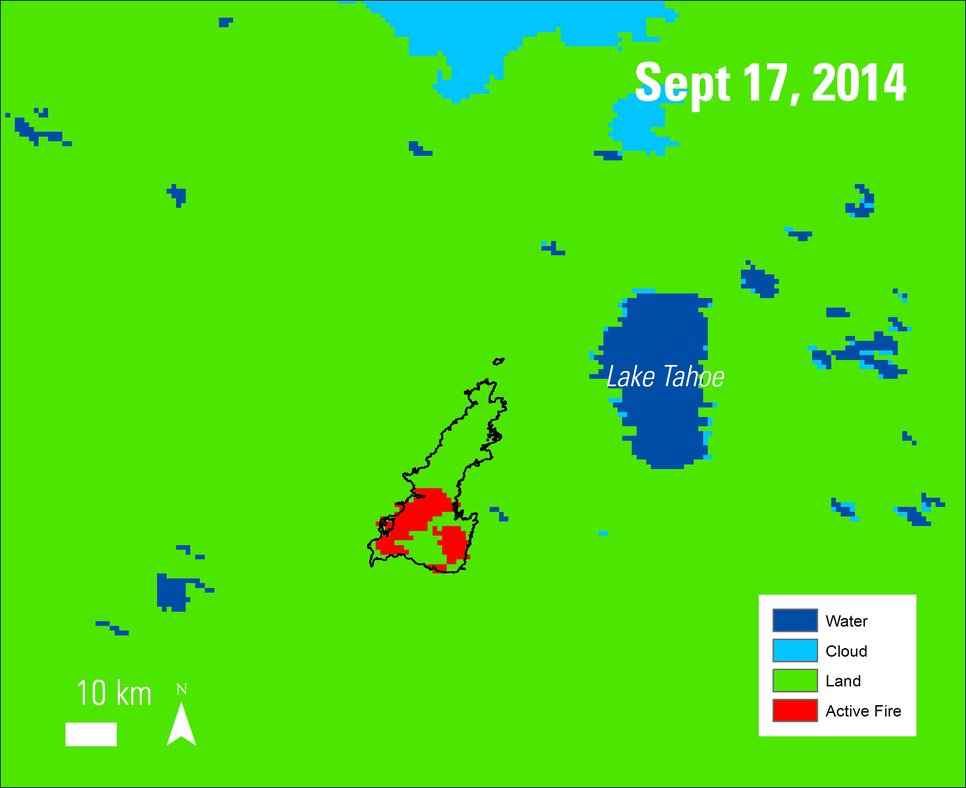