Highlights from the Literature: July to September 2021

Data products distributed by the Land Processes Distributed Active Archive Center (LP DAAC) are used in many different Earth Science applications. LP DAAC data products play an important role in modeling, detecting changes to the landscape, and assessing ecosystem variables, to name a few. Three of those applications, published between July and September 2021, are highlighted below. A more comprehensive list is available on the LP DAAC Publications web page. 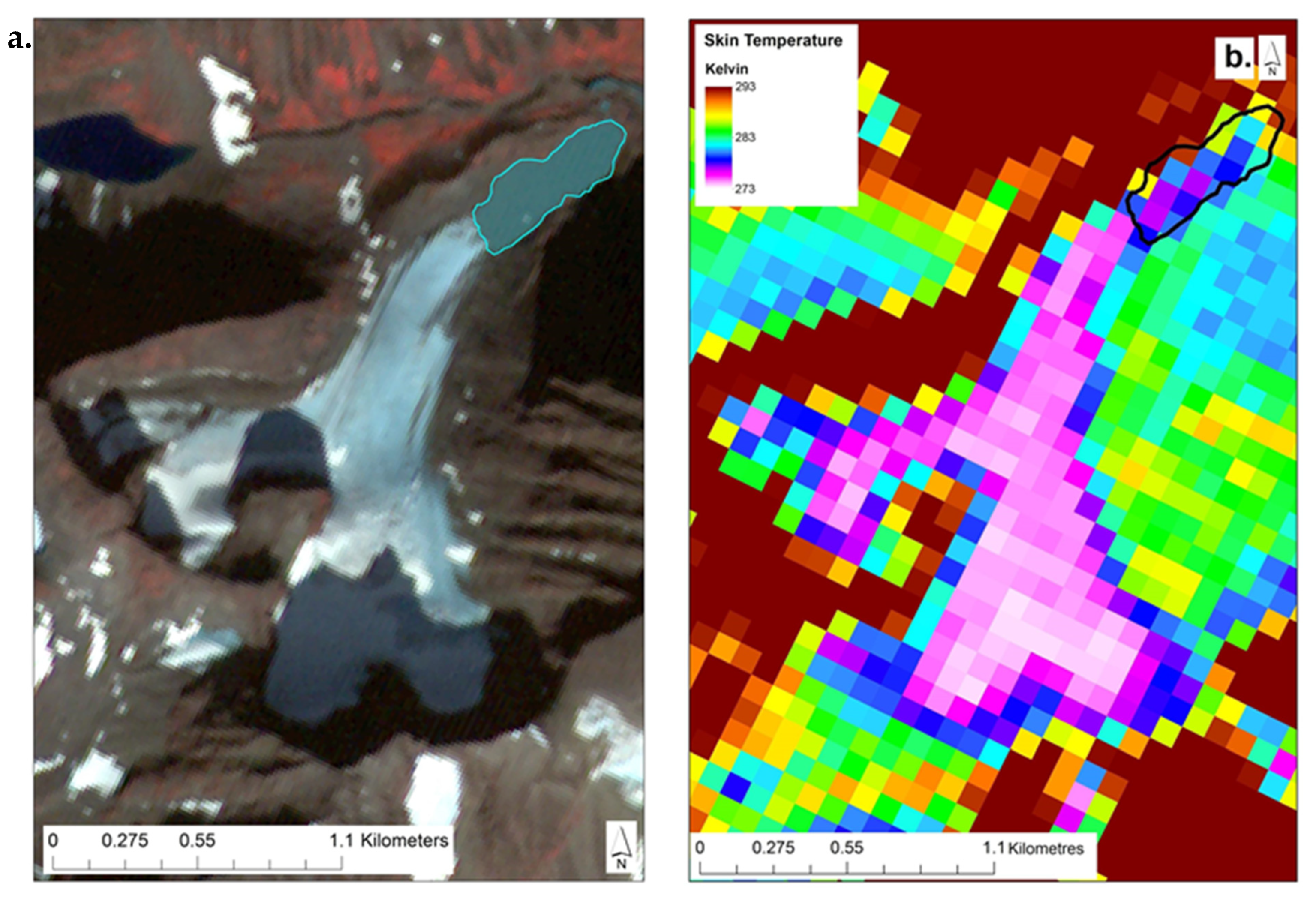 Proglacial lake 6 and the Kaskapakte Glacier, captured by Terra ASTER on August 8, 2014. a) Terra ASTER registered radiance at sensor (AST_L1B) data over the lake and glacier. b) Same area with the Terra ASTER surface kinetic temperature (AST08) data product.

Lakes are important ecosystems that store and provide freshwater and serve as a habitat for a lot of animals and plants. They also are impacted by surrounding elements and can serve as an indicator of climate change. Dye and others (2021) analyzed 12 proglacial lakes throughout Arctic Sweden to examine each lake’s response to its changing climate, including melting glaciers and increases in air temperature. The authors used several data products from the Terra Advanced Spaceborne Thermal Emission and Reflection Radiometer (ASTER) sensor in their research. First, they used Terra ASTER registered radiance at the sensor (AST_L1B) data to map out and select the 12 largest lakes in the study area. Next, they used Terra ASTER surface kinetic temperature (AST_08) data to identify the temperature of the lakes throughout 2014. And lastly, they used the Terra ASTER surface emissivity (AST_05) data product to assess the quality of the Terra ASTER temperature data. The authors specifically chose to use Terra ASTER data due to its higher spatiotemporal resolution and reasonable accuracy. In addition, the authors used meteorological and air temperature data from local institutes. The Terra ASTER temperature data was validated using in situ thermistor data and was found to have a strong correlation. The average lake surface temperature across all 12 lakes was found to be 8.9°C (48°F), significantly higher than the 1°C (33.8°F) baseline that the authors state is commonly assumed for this type of lake system. The authors extended their study period to include data from 2000, 2006, and 2018 for a historical approach and found a warming of >4°C. The warmer temperatures were found to be directly comparable to other areas of the world that are experiencing proglacial lake warming, including New Zealand, Nepal, and Patagonia. The authors note these warmer temperatures are a cause for concern as the temperatures will cause rapid glacier erosion and will increase ice calving rates. These increased water temperatures will also impact species living downstream of the lakes. The authors believe their study is the first of its kind for research in this area. Their research shows a strong relationship between Terra ASTER surface kinetic temperature data and in situ data and can be used as a steppingstone for future studies. 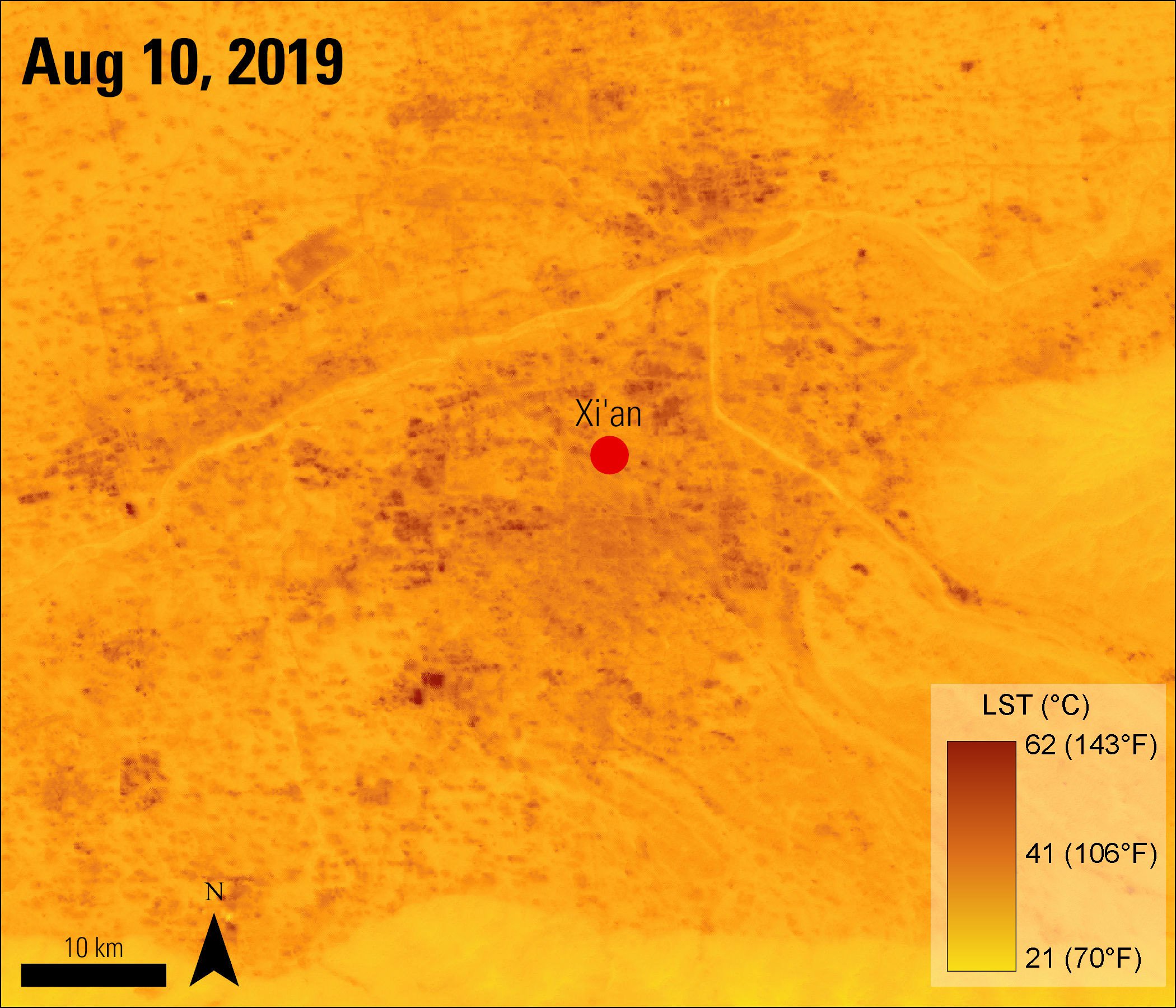 An ISS ECOSTRESS LST map of Xi’an, China, and the surrounding area during August 10, 2019, one of the hottest days recorded during Chang and others’ (2021) study period. These data were downloaded using the Application for Extracting and Exploring Analysis Ready Samples (AppEEARS).

Chang and others (2021) used International Space Station (ISS) Ecosystem Spaceborne Thermal Radiometer Experiment on Space Station (ECOSTRESS) land surface temperature (LST) (ECO2LSTE) data from June to September 2019 to examine daytime and nighttime temperature changes in the megacity of Xi’an, China. The authors chose to use ISS ECOSTRESS data due to its 70-meter resolution and repeat coverage throughout the day based on the orbit of the ISS. A local climate zone (LCZ) classification was used to categorize areas within the city into seven classes, including compact high-rise, compact midrise, compact low-rise, open high-rise, open midrise, open low-rise, and scattered trees. These classifications were used to examine how LST differed between the types of LCZs. First, the authors used the ISS ECOSTRESS cloud mask (ECO2CLD) data to identify cloud pixels. The mean LST was then calculated for each LCZ by averaging the LST of the cloudless pixels. The authors found several patterns across the LCZs. The highest LST values were more associated with compact areas, with the highest mean LST value of 38.9°C (102.02°F). The authors also found that heat in compact LCZs increased faster than in areas with open, spread out buildings. During the day, the compact low-rise LCZ had the highest mean LST. Areas with low-rise buildings were found to have higher LSTs than areas with high-rise buildings in both compact and open areas. The authors state this could be due to high-rise buildings casting shadows, cooling parts of their area. Vegetated areas experienced a lower LST, with a mean value of 23.5°C (74.3°F). At night, areas with compact buildings still had higher LST values but the difference was found to be insignificant. It was also found that compact low-rise and vegetated areas had the largest temperature contrasts of 5°C during the day and 2°C at night. The authors believe their findings will improve our understanding of the spatial heterogeneity of LST over complex urban landscapes. They believe this will help inform city planners who are creating heat mitigation strategies and shows that there is an exciting potential for using ISS ECOSTRESS LST data in future studies.

Image provided by the authors, Acácio and others (2021).

The Shoebill (Balaeniceps rex) is a wetland bird that is classified as vulnerable by the International Union for Conservation of Nature. Only 5,000–8,000 Shoebills are estimated to be left in the world. Their population has been declining due to habitat loss, human interference, and illegal bird trading. However, according to Acácio and others (2021) not much is known about the ecological movement of these birds. Therefore, the authors set out to study the movements of 11 GPS tracked Shoebills from December 2011 to October 2018 in the Bangweulu Wetlands of Zambia with the hopes of improving our understanding of these unique creatures. In this study, the authors used the Terra Moderate Resolution Imaging Spectroradiometer (MODIS) 8-day surface reflectance (MOD09A1) data product to calculate Normalized Difference Water Index (NDWI) as a proxy for surface water. Green and NIR (near-infrared) bands were used to calculate NDWI, where MODIS Band 4 is Green, and MODIS Band 2 is NIR. An NDWI value of 1 indicated open water and -1 indicated dry land. The Shoebill’s annual home range was found to be ~1,500 kilometers (km)2 (579.2 miles2 (mi2)). A similar range was found between adults and immature birds, but each bird had a large variation individually in their specific range. For more than 80 percent of the study, the Shoebills moved less than 3 km (1.9 mi). However, when a bird moved out of the 3 km range for more than two days, it was considered a “Moving Day.” Locations where a bird stayed during this time were called “Areas.” Between October and December, the rainy season, the authors found the NDWI of the Areas that were being used by the birds was statistically different from the NDWI of the Areas the birds had just left. Interestingly, when an adult Shoebill left, the Area became drier, but when a younger Shoebill left, the Area became wetter. The authors note this may be due to the more experienced birds wanting to catch a bigger catfish in deeper water and the younger birds wanting to catch more, smaller fish in less deep water. In addition, the authors found that movement of younger birds was consistent throughout the year. The movement of the adult birds, on the other hand, was found to be smaller during the breeding season (May to October). This is due to at least one adult bird staying on the nest during the incubation and hatching periods, until their chicks reach ~40 days old. During the rainy season, the birds occupied areas with a lower NDWI, which the authors believe was the most available habitat at the time. Finally, the authors also found that as birds moved, they sought out locations with the same level of surface water as their previous spot. The authors indicated future research should be done to include data on rainfall and Normalized Difference Vegetation Index (NDVI).