Highlights from the Literature: October to December 2021

Data products distributed by the Land Processes Distributed Active Archive Center (LP DAAC) are used in many different Earth Science applications. LP DAAC data products play an important role in modeling, detecting changes to the landscape, and assessing ecosystem variables, to name a few. Three of those applications, published between October and December 2021, are highlighted below. A more comprehensive list is available on the LP DAAC Publications web page. 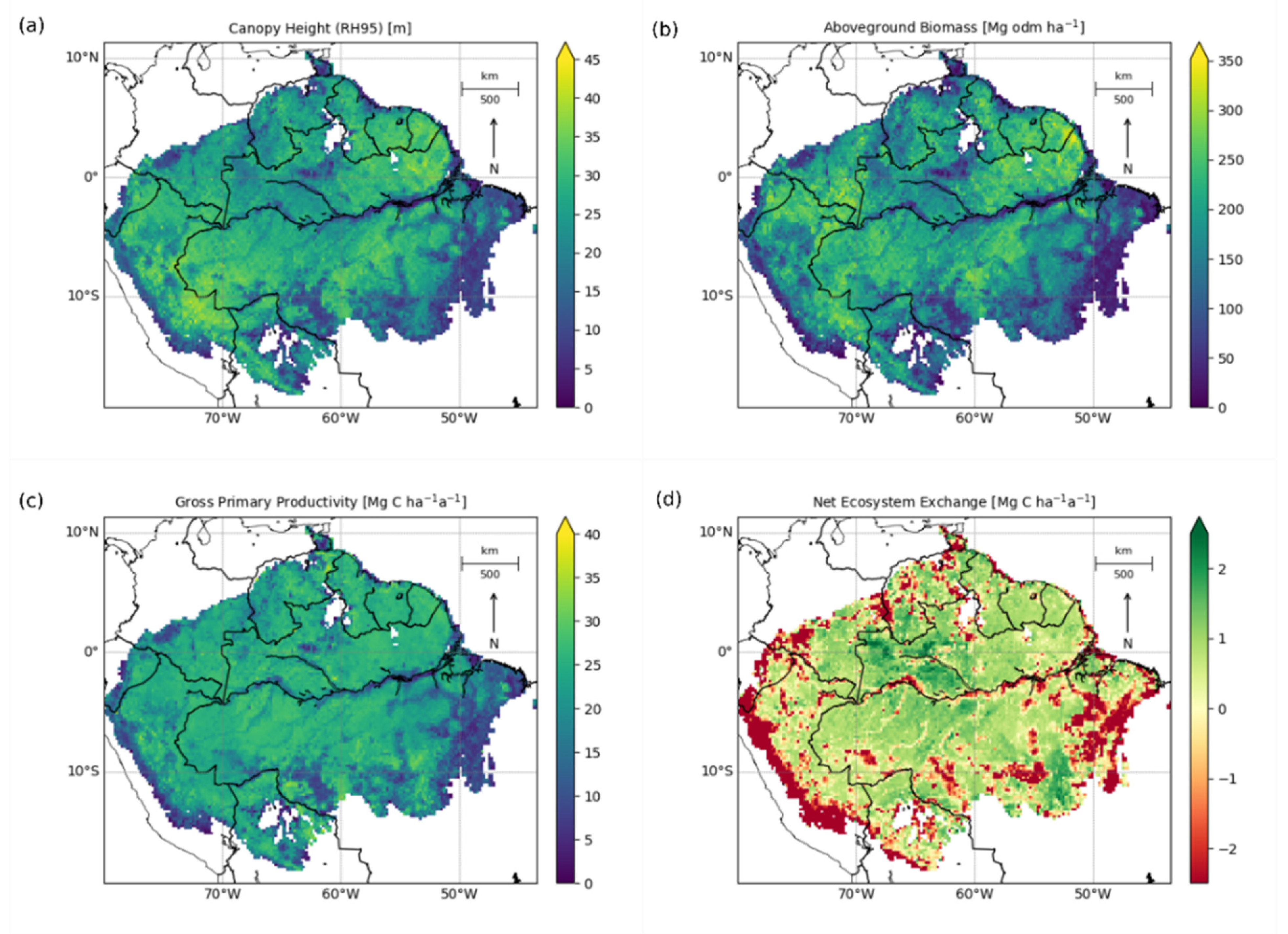 Image and caption provided by the authors, Bauer and others (2021).

The Amazon Rainforest is the largest intact tropical forest in the world. This forest is believed by many to be the world’s largest carbon sink, an area that absorbs more carbon than it releases. These large carbon sinks can potentially mitigate climate change. However, according to Bauer and others (2021), changes in the global carbon cycle and their implications are still an area of research with large uncertainties. In this paper, the authors examine the productivity and carbon balance of the Amazon Rainforest by using International Space Station (ISS) Global Ecosystem Dynamics Investigation (GEDI) Level 2A (GEDI02_A) Geolocated Elevation and Height Metrics data from 2019 to 2020, and a forest model called FORMIND (forest model individual-based). Using the GEDI data and the FORMIND model, the authors created a forest simulation to analyze forest structure, aboveground biomass, and Net Ecosystem Exchange (NEE), and estimated the age and productivity of the forest. Additionally, they created a carbon balance map of the entire forest. The authors divided the forest into several regions based on similar environmental conditions, simulating 128,000 hectares (316,294.8 acres) of forest growth. The total gross primary productivity (GPP) of the forest was found to be 11.4 Pg C a-1. The productivity of the forest was found to be higher when the complexity of the canopy height was low, and vice versa, lower when there was higher complexity. The NEE, or total carbon balance of the region, was found to be −0.1 Pg C a−1. Negative NEE numbers indicate a carbon source rather than a carbon sink. Carbon sources in the forest were found to be in the western Andes, the northern Negro-Branco moist forests, and in the southeastern region where the Arc of Deforestation—an area where land is cleared for ranching, farming, and logging—is located. Overall, the authors found the Amazon Rainforest is close to carbon neutrality, meaning the forest is not actually a major carbon sink. The authors did not include carbon emissions from forest disturbances like deforestation or fires in their simulation, and they note that if they did include these factors, the Amazon Rainforest would now be considered a carbon source. They also believe the GEDI dataset was well suited for their study to examine both the vertical and horizontal structure of the forest. The high spatial maps created by the authors, along with knowledge of the forest, can help policymakers make localized decisions for reforestation to mitigate climate change. 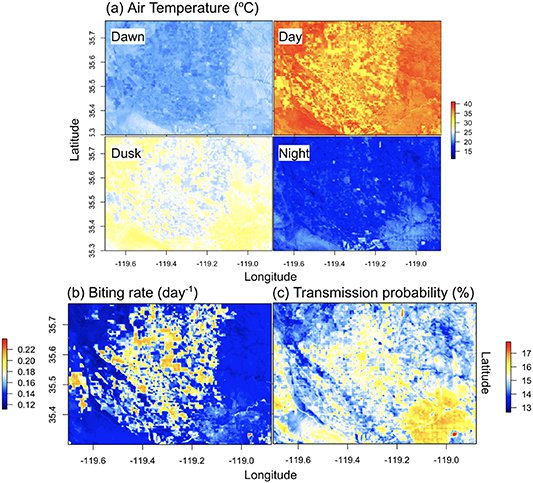 (a) A subsample of air temperature maps, (b) biting rate, and (c) transmission probability throughout the study region by averaging across the resulting diurnal variations in biting and transmission rate.

Image and caption provided by Boser and others (2021).

Mosquito-born diseases (MBD) are a threat to over 80 percent of the world’s population. Mosquito populations are driven by many factors, including temperature. As the world continues to experience hotter temperatures, the geographical range and intensity of mosquitos will continue to evolve. Boser and others (2021) use Land Surface Temperature (LST) data from the International Space Station (ISS) ECOsystem Spaceborne Thermal Radiometer Experiment on Space Station (ECOSTRESS) Land Surface Temperature and Emissivity (ECO2LSTE) from 2018 to 2020, downloaded from the Application for Extracting and Exploring Analysis Ready Samples (AppEEARS), in combination with air temperature data, mosquito biting rate data, and transmission probability data to create MBD maps over the San Joaquin Valley, California, USA. The authors use ground-based air temperature data to create a relationship between air temperature and LST data, which is then applied to the ECOSTRESS data to create their maps. These maps were used to study changes in mosquito biting rates and West Nile Virus (WNV) transmission probablity at different times of day. The authors found urban areas had higher temperatures than agricultural (fruit, orchards, field crops) areas, which translated to a higher probability for transmission. However, the biting rate in urban areas was found to be lower than in agricultral areas. In addition, they found agricultural areas had a higher transmission rate during the day but lower biting and transmission rates than urban areas at night. The authors also looked at different types of crops and found uncultivated areas had very high temperatures with lower biting and transmission rates, whereas cooler orchards had lower temperatures and the highest biting rates and transmission risks in the study area. The authors believe the WNV risk they have mapped over these different land cover types can help create more targeted mitigation efforts as the area’s climate and types of land cover continue to change. 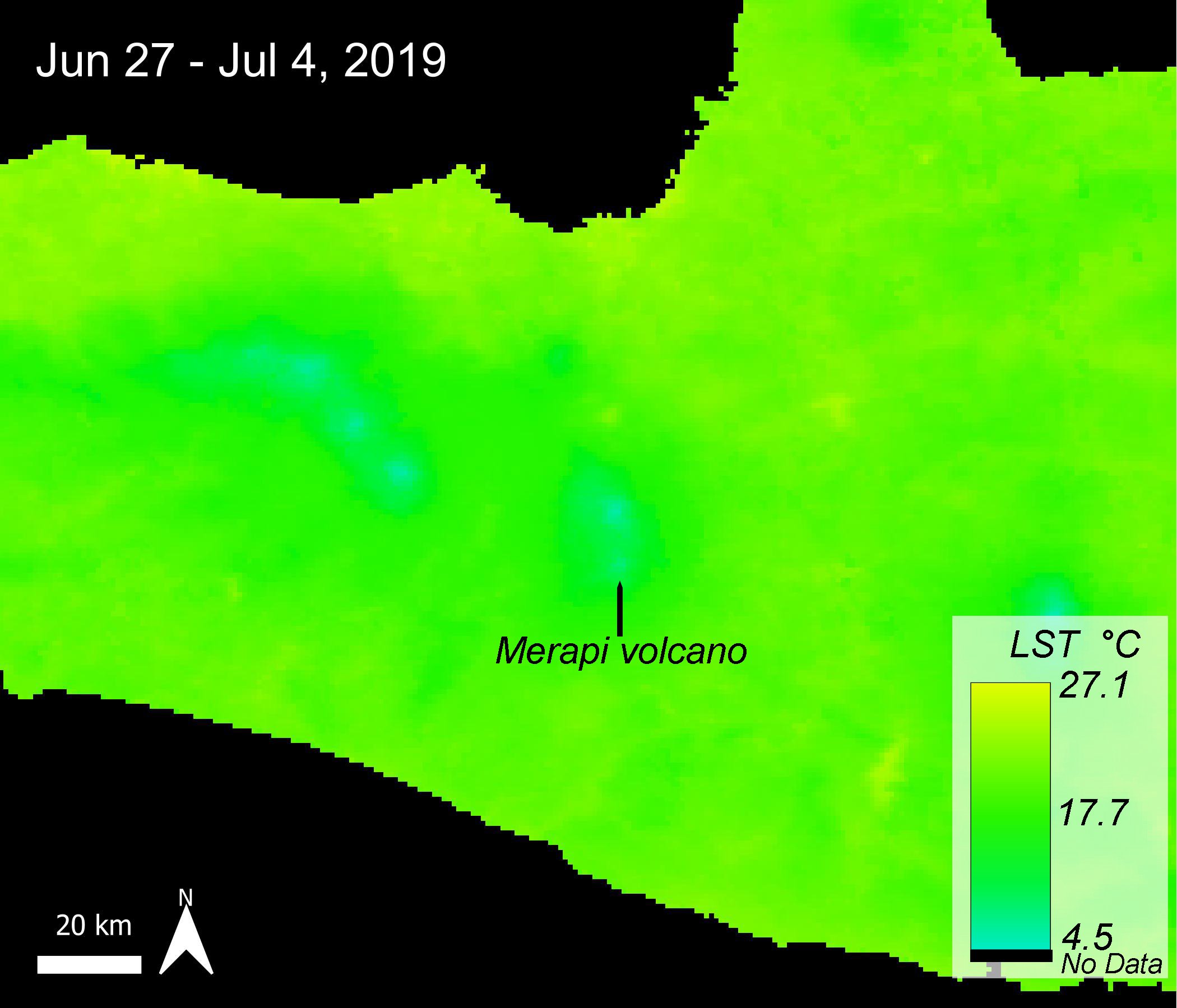 The crater of Merapi, shown with Terra MODIS nighttime LST data during the study period of Chen and others (2021).

The Merapi stratovolcano, Indonesia’s most active volcano, is located between the province of Central Java and the Special Region of Yogyakarta, where millions of people live. In 2010 the volcano had a large, dangerous, 100-year eruption event that displaced over 350,000 people and claimed 353 lives. The frequency of eruptions at Merapi has increased in recent decades, leading Chan and others (2021) to use remote sensing data to perform a spatial and temporal study to understand past eruptions from 1988 to 2020 and to forecast potential future trends. In this study, the authors use Terra and Aqua Moderate Resolution Imaging Spectroradiometer (MODIS) 8-day nighttime Land Surface Temperature (LST) (MOD11A2 and MYD11A2) data along with Terra Advanced Spaceborne Thermal Emission and Reflection Radiometer (ASTER) Surface Kinetic temperature (AST_08) data and Landsat 5 Thematic Mapper (TM) and Landsat 7 Enhanced Thematic Mapper Plus (ETM+) for their observations. The authors extracted LST from the Terra and Aqua MODIS data over the crater of Merapi and then derived seasonal and trend decomposition using a Loess technique. The technique shows peaks in thermal anomalies that are caused by eruptions. The Terra ASTER data was used to validate the Terra MODIS and Landsat data, which agreed with both. The authors found a rising trend in LST throughout their study period in all three sensors and found a consistency in irregular temperatures that were caused by eruption events or heat sources above or just below the surface. Eruptions in 1990, 2002, 2006 to 2007, and 2010 to 2012 were all captured via an increase in LST values. The authors believe their approach is helpful to understand past events and future eruptions and complements existing volcanic monitoring systems.