Highlights from the Literature: April to June 2018

Data products distributed by the Land Processes (LP) Distributed Active Archive Center (DAAC) are used in many different Earth science applications. They play an important role in modeling, helping to detect changes to the landscape, and assessing ecosystem variables, to name a few. Three of those applications, published between April and June 2018, are highlighted below. A more comprehensive list is accessible on the LP DAAC Publications webpage. 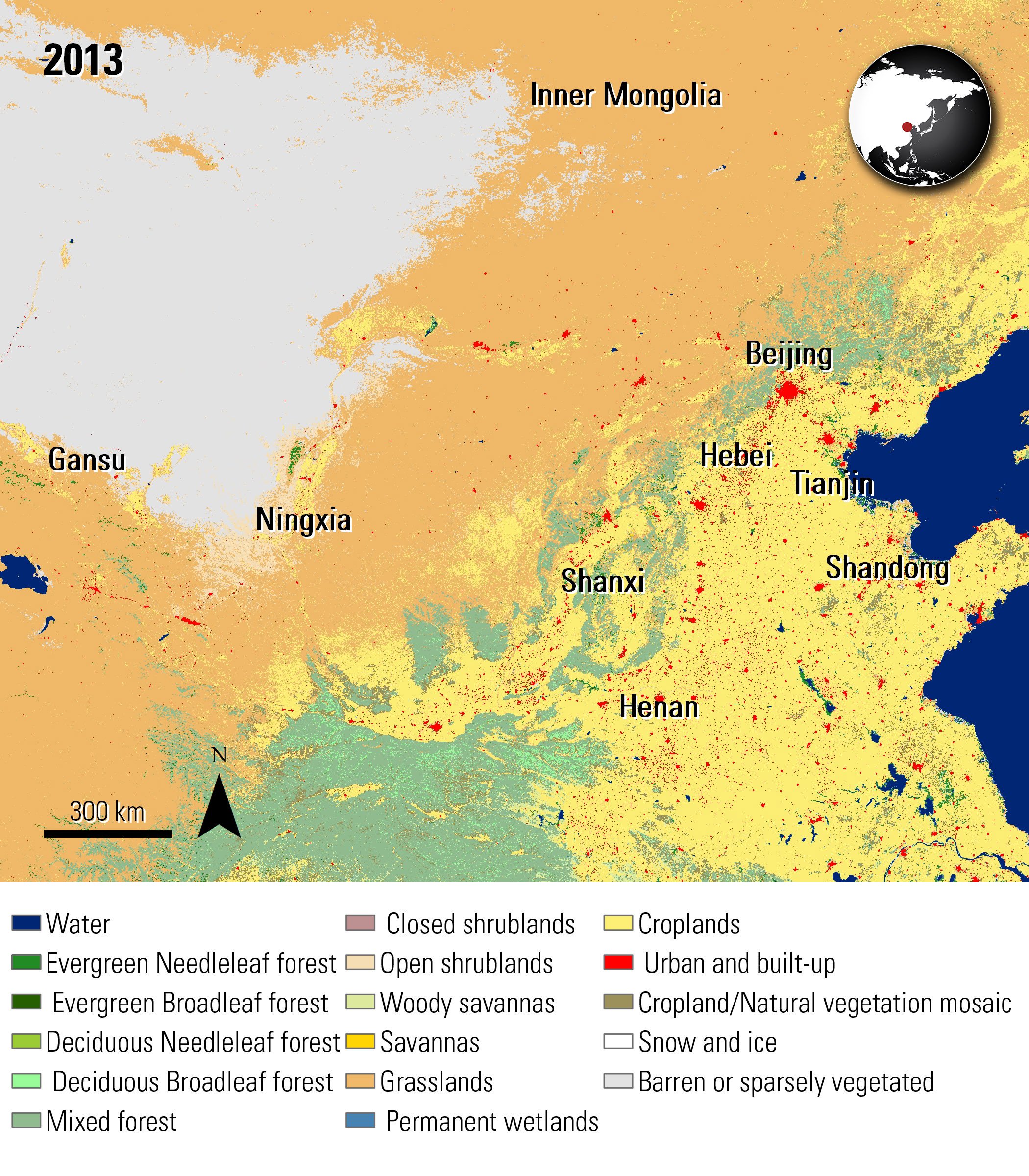 A view of the study area from Xin and others (2018) showing the IGBP land cover classification from the Combined Terra and Aqua MODIS Land Cover data product for the year 2013. On the North China Plain, dust storms originate from Inner Mongolia, Ningxia, Gansu, and Shanxi. The dust typically settles near the densely populated areas, including Beijing, Hebei, Henan, Tianjin, and Shandong.

In this paper, Xin and others (2018) set out to study the impact ecological restoration programs have on the spreading of dust in the North China Plain. The authors use the International Geosphere Biosphere Programme (IGBP) land cover classification information, derived from the Terra and Aqua Combined Moderate Resolution Imaging Spectroradiometer (MODIS) Land Cover data product (MCD12Q1) to look at how these programs, including the Great Green Wall, have changed the land cover of the area between 2001 and 2013. They also use dust data from China’s Ministry of Environmental Protection to study the behavior of dust during a major 2006 dust storm. The authors specifically chose to use MODIS land cover because previous research found that MODIS provides the best representation of land cover over China. Based on the MODIS land cover data, the authors found that vegetation increases and transitions from bare soil to grasslands and savannas between the source of the dust storms, north western provinces shown on the map, and the eastern densely populated provinces, including the city of Beijing. The MODIS land cover data also show an increase in forests near these eastern provinces. These increases in vegetation are believed to be related to the ecological restoration programs.
Using the Weather Research and Forecast (WRF)-dust model, the authors combined the MODIS land cover data with the dust data to study how the land cover changes, brought about by these programs, impact dust concentrations. The authors found that the ecological restoration programs do help in reducing dust concentrations in the study area, particularly in Beijing, Tianjin, and Hebei. Based on the model, the authors found that the North China Plain had a 5 to 15 percent reduction in dust particulate matter during the 2006 storm. It is believed that the reduction of dust concentrations also positively contributed to controlling air pollution in the area. The authors note results from this study can provide insights into how the ecological restoration programs impact dust and pollutants in the region, but they state further research will need to be completed for a generalized conclusion. 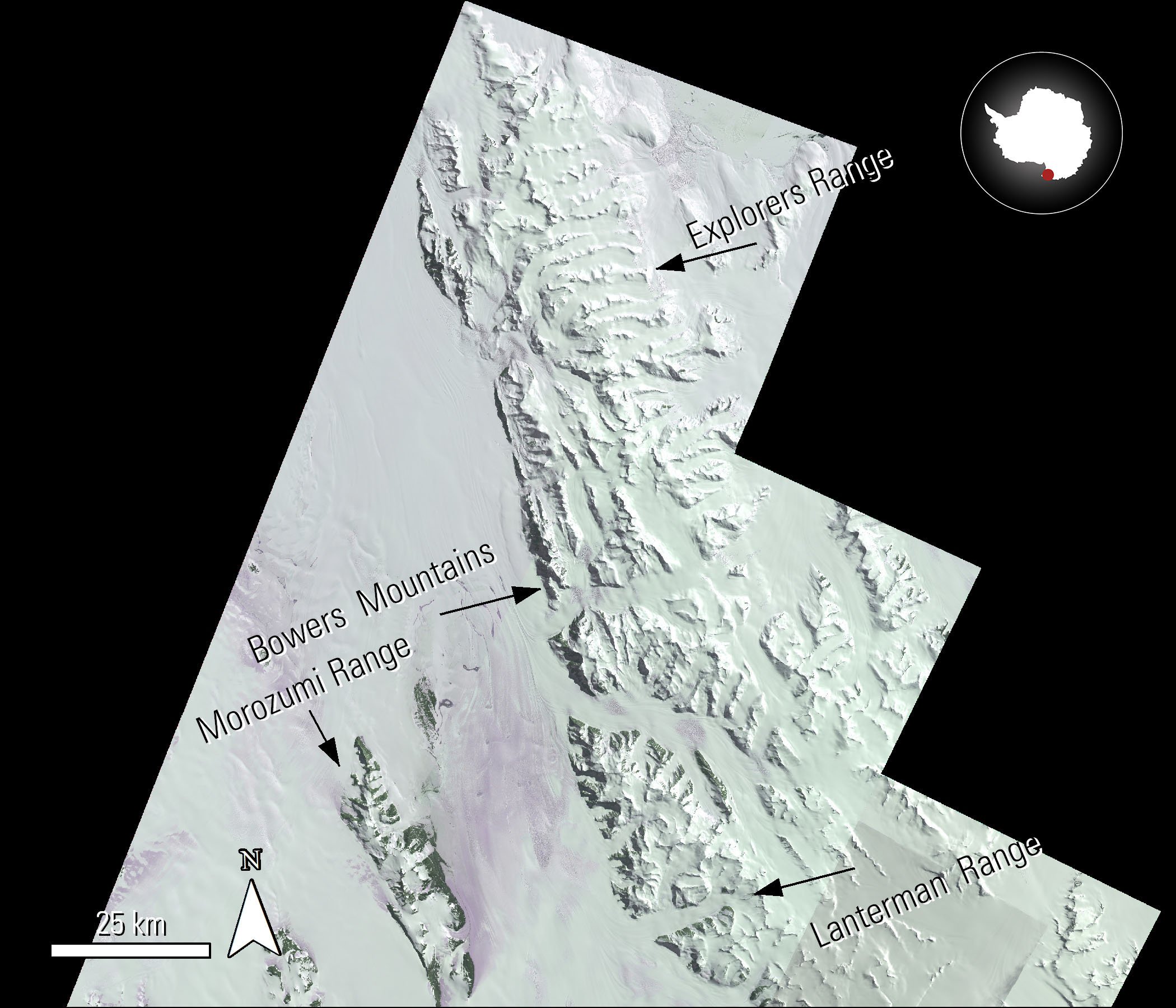 A Terra ASTER mosaic of the study area from Beiranvand Pour and others (2018) research. This mosaic uses ASTER scenes from 2003, 2005, and 2006, as identified in the article. The authors use band ratios from this data product to study the different mineral compositions in the area.

Beiranvand Pour, A., Park, Y., Park T., Kuk Hong., Hashim, M., Woo, J., and Ayoobi, I., 2018, Regional geology mapping using satellite-based remote sensing approach in Northern Victoria Land, Antarctica: Polar Science, v. 16, p. 23–46, at https://doi.org/10.1016/j.polar.2018.02.004.
Antarctica is a vast, remote land with many areas that are not easily accessible for field work. Therefore, Beiranvand Pour and others (2018) seek out a way to map the geology of the Northern Victoria Land in Antarctica on a geological terrane scale using the Terra Advanced Spaceborne Thermal Emission and Reflection Radiometer (ASTER) Level 1 Precision Terrain Corrected (AST_L1T) data product along with data from Landsat 8. The authors developed several spectral-band ratios to map snow and ice and different types of minerals, including iron oxide/hydroxide, quartz-rich felsic, and more. These ratios highlight certain features and materials that cannot typically be seen using raw band data, and they minimize illumination differences due to topography, which can be an issue in the region. Several mosaicked maps are created from both the ASTER L1T and Landsat data, to highlight where different minerals can be found throughout the study area. These maps also provide a full view of various geological structures. The results from this research were verified by GPS surveys on geological expeditions, existing geological maps, and laboratory XRD analysis. The band ratios developed in this study can be useful for other inaccessible locations in Antarctica and around the world. The authors believe that in the future, the ASTER and Landsat data will be able to provide more comprehensive geological information at multiple local and continental scales. 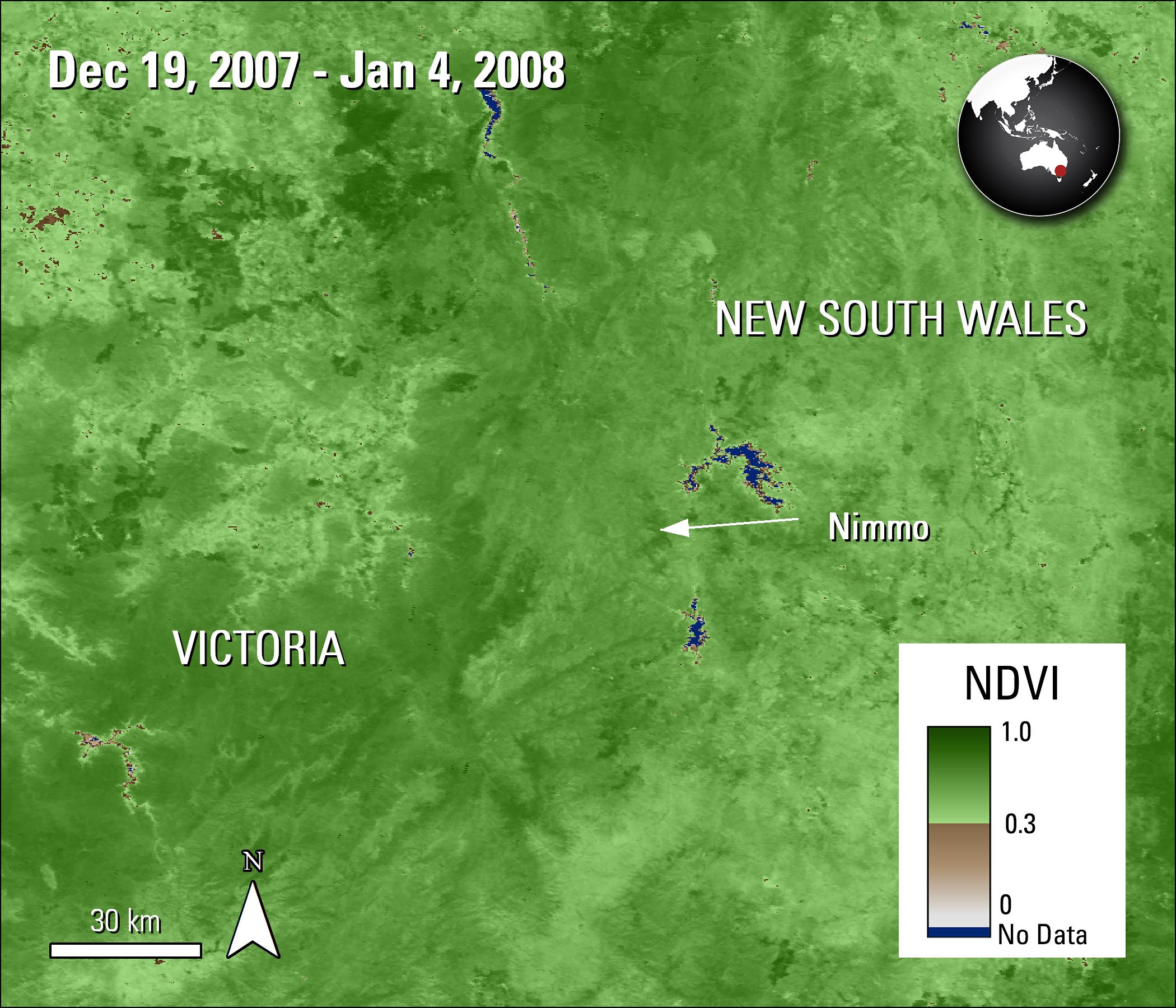 Nimmo and the surrounding area is shown in this Terra MODIS 16-day NDVI image. NDVI is used to study the health of vegetation. In this study it was used to observe long term vegetation changes throughout the montane grassland.

As the climate changes throughout the world, a lot of research has been done to determine how these changes are impacting the Northern Hemisphere. However, according to Marchin and others (2018), not a lot of research has been completed on impacts to the Southern Hemisphere. In this paper, the authors look at long term changes (2001–2016) in the phenology and productivity of Nimmo, a montane grassland in Australia. The authors use the Normalized Difference Vegetation Index (NDVI) layer of the Terra MODIS Vegetation Indicies data product (MOD13Q1) and climate data from other sources for this paper. Specifically, they use MODIS NDVI data to characterize the seasonal phenology patterns in the study area. In addition, they also record vegetation greenness using near-surface repeat digital photography (PhenoCam). The authors report that the mean growing season length was 244 days, which is two weeks longer than in the Northern Hemisphere, with a peak in NDVI in December. However, this longer growing season was not found to be correlated with increased vegetation productivity. The green-up of the study area was found to start 16 days earlier, on average, over the 15-year study period, which the authors believe is due to increases in late winter (August) temperatures. The authors did not see a significant change over the study period for the senensce, peak NDVI date, or length of the growing season. However, these were all impacted in different years by higher temperatures and the amount of rainfall that occurred prior to each event. The MODIS NDVI data were then compared to the near-surface greeness index created from the PhenoCam digital imagery. The authors found the satellite data and digital imagery had agreeing results, and they believe that in the future, the satellite data can be used to extend PhenoCam records.