Highlights from the Literature: April to June 2019

Data products distributed by the Land Processes Distributed Active Archive Center (LP DAAC) are used in many different Earth Science applications. LP DAAC products play an important role in modeling, detecting changes to the landscape, and assessing ecosystem variables, to name a few. Three of those applications, published between April and June 2019, are highlighted below. A more comprehensive list is available on the LP DAAC Publications webpage. 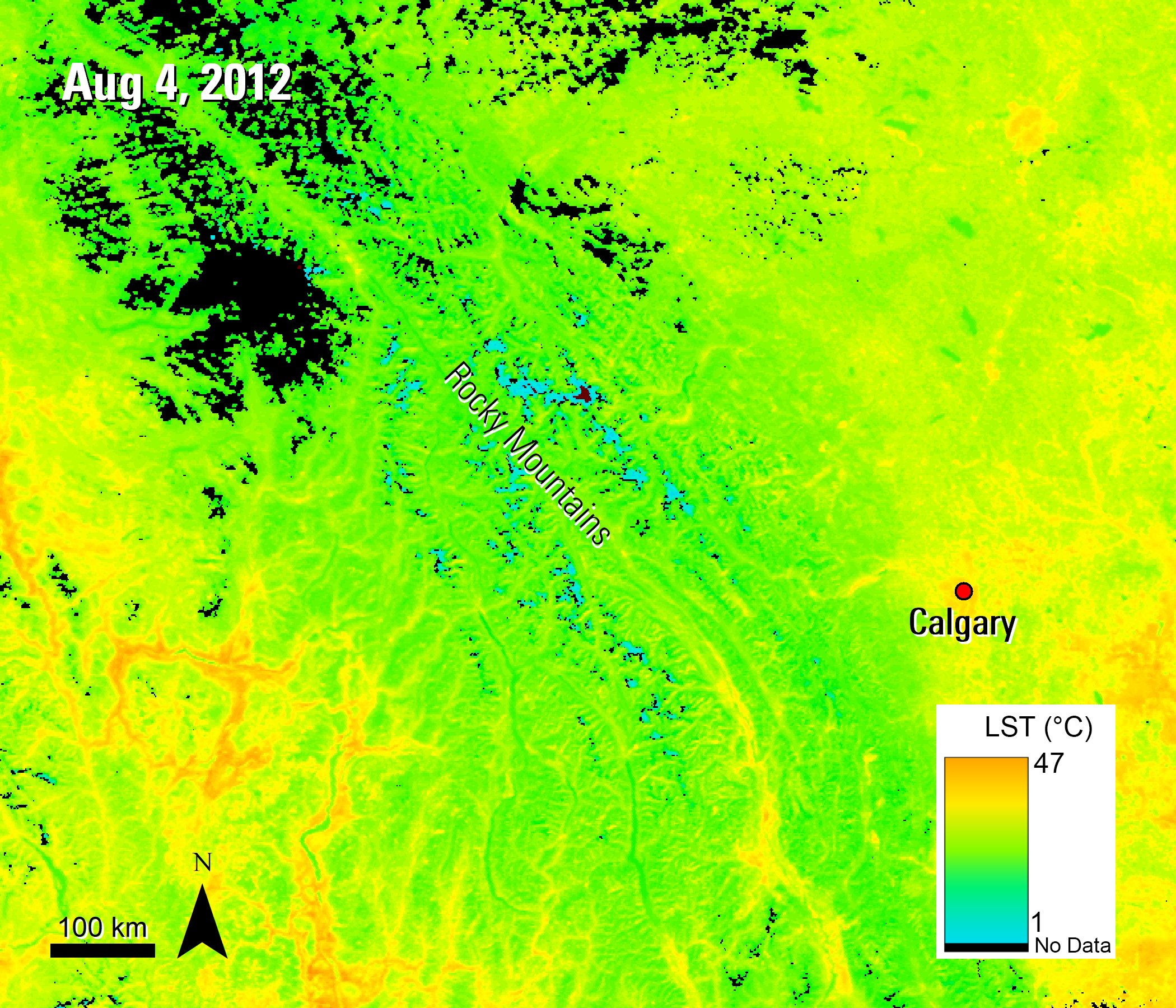 A view of the Rocky Mountains in western Alberta, Canada, the study area from Laskin and others (2019). This image shows the Daytime Land Surface Temperature (LST) layer from the Terra MODIS LST data product during the summer of 2012.

Increasingly warmer temperatures are causing vegetation to develop earlier, especially in extratropical regions. These changes can impact how plants and animals interact. For example, grizzly bears on the Alaskan coast are now opting to eat more berries than salmon as the life cycle of these two food sources are starting to overlap. This then changes what types of nutrients are dispersed throughout the forest. These interactions are especially hard to observe with remote sensing in forest understories that are blocked by canopies. Laskin and others (2019) set out to study the distinct phenophases of understory vegetation in near-real time using in-situ field data, PlantCams time-lapse data over 45 plots, and Daily Land Surface Temperature (LST) data from the Moderate Resolution Imaging Spectroradiometer (MODIS) aboard the Aqua (MYD11A1) and Terra (MOD11A1) satellites. In this paper, the researchers are looking at the Canada buffaloberry (Shepherdia canadensis), an essential food source for grizzly bears, in western North America during 2011 and 2012. First, the authors conduct air temperature modeling to bridge the gap between canopy-top observations from MODIS data and understory air temperatures using in-situ data. Next, present-day phenology maps are produced by calculating developmental threshold temperatures and applying phenophase accumulated growing degree days to the raster stacks. Finally, the authors forecast what the phenology might look like in the years 2071–2100 by modifying the current phenology maps using a downscaled regional representative concentration pathway (RCP) 4.5 anomaly derived from the CMIP5 model ensemble. To take their research further, the authors then mask the data with a species-distribution model. The authors found their maps successfully predicted the progression of the S. canadensis in 16 of their validation locations. Their maps forecasted a significant advance (13-day shift) in florescence, or flowering, and a 19-day advance in the development of fully ripe berries. The authors discovered that the rate of ripening increases with elevation and project that the subalpine regions of the study area will experience ripening 37 days earlier by the 2080s. They also predict an 8 percent decline in the range of the species in the study area but an increase in the availability of ripe berries during peak coverage. If these projections are correct, it could mean the grizzly bear population in the area will experience food deprivation prior to hibernation, as this would cause a large gap between the availability of these berries and the natural timing of grizzly bear hibernation. The authors confirmed their results with a growth-chamber warming experiment. They believe their framework is highly effective in observing stages of plant development in the understory and shows a strong link between air temperature and plant composition. The authors believe their study could be improved in estimating late-season phenophases by incorporating site moisture derived from MODIS thermal bands and chilling degree days. 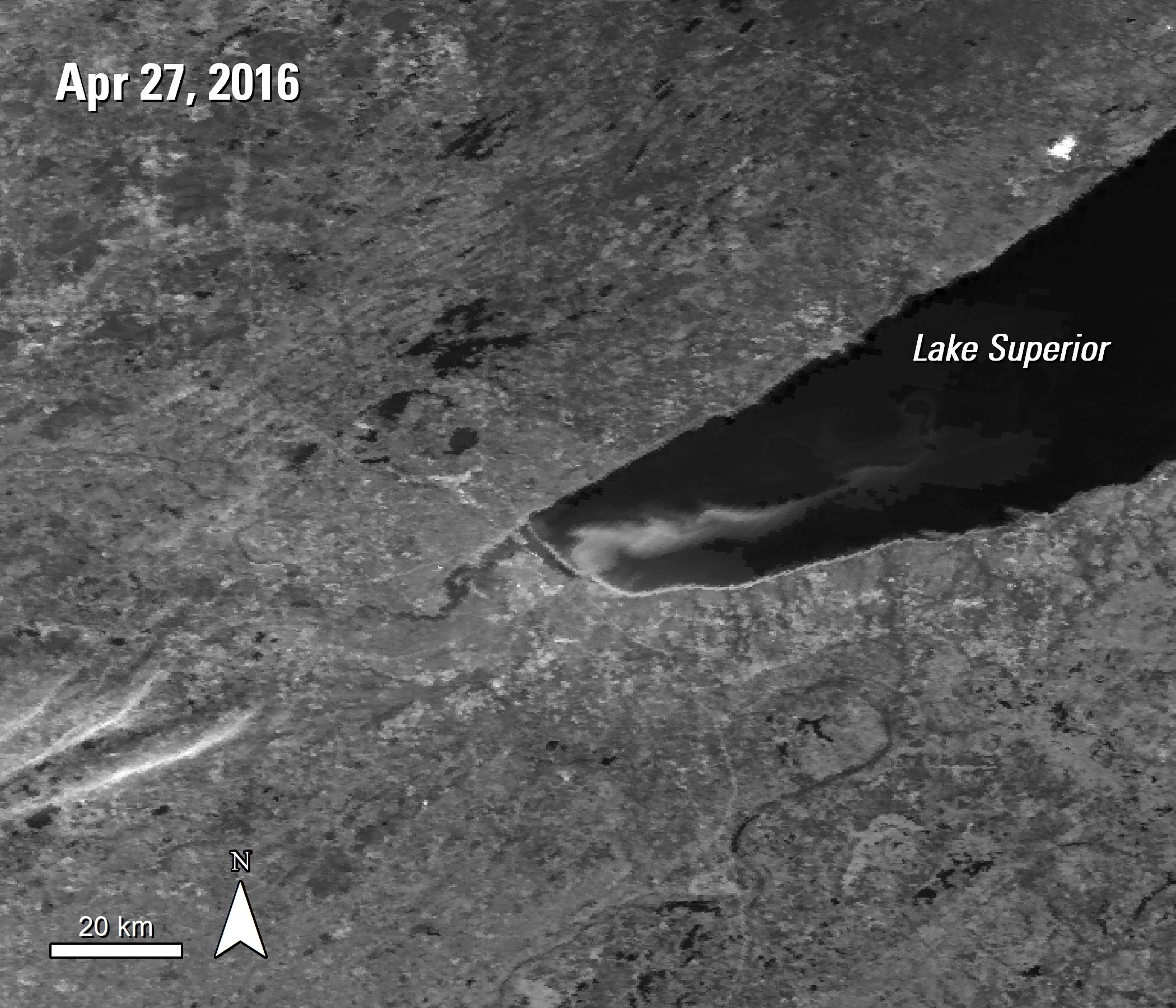 A Terra MODIS surface reflectance image of the wind-driven plume over Lake Superior during the study period of McKinney and others (2019).

In this paper, McKinney and others (2019) examine wind-driven turbidity plumes in Lake Superior, near the coasts of Wisconsin and Minnesota. They are looking to see if the volume of transport by the plumes is related to the force of the wind. These wind plume events can serve as a cross-shelf transport mechanism, which increases the rate at which sediment, biological creatures, and chemicals can move and impact offshore ecosystems. The authors specifically examine a plume that occurred during late April 2016 over the western arm of Lake Superior using in-situ data and satellite remote sensing data. These data include over-lake meteorological data, river discharge data, precipitation data, an underwater glider to measure chlorophyll, a WETLabs moored profiler to measure optical backscatter, automated meteorological station data, and daily surface reflectance data from the Terra (MOD09GQ) and Aqua (MYD09GQ) satellite sensors. The authors specifically used MODIS data due to its daily temporal resolution and availability of usable images that make it possible to track daily development of features. They develop an analytical model to characterize flows in the central channel and then compare these flows with observations of the wind plumes in the opposite direction. They also compute the flux of water offshore and total offshore volume during the wind event. Using the MODIS data, the authors found the April 2016 sediment-laden plume extended over 18 kilometers (km) (~11 miles) offshore. Lake surface temperatures from the same time as the overpass time of the satellite imagery also showed the area of the plume was warmer than the surrounding waters. Using the MODIS reflectance Band 1, the authors saw the plume had a high reflectance, while the surrounding waters showed a low reflectance. Using the profiler, the authors noted that the sediment-laden water that was visible in the MODIS imagery was also seen throughout the water column with subsurface observations of optical backscatter and temperature. The authors also looked at additional historical plumes to better understand the relationship. The authors found ice-free events reveal a significant amount of interannual variability in the total amount of nearshore water transported offshore during the springtime. They believe this variability might be a function of the wind field, and the frequency and intensities of these plumes. 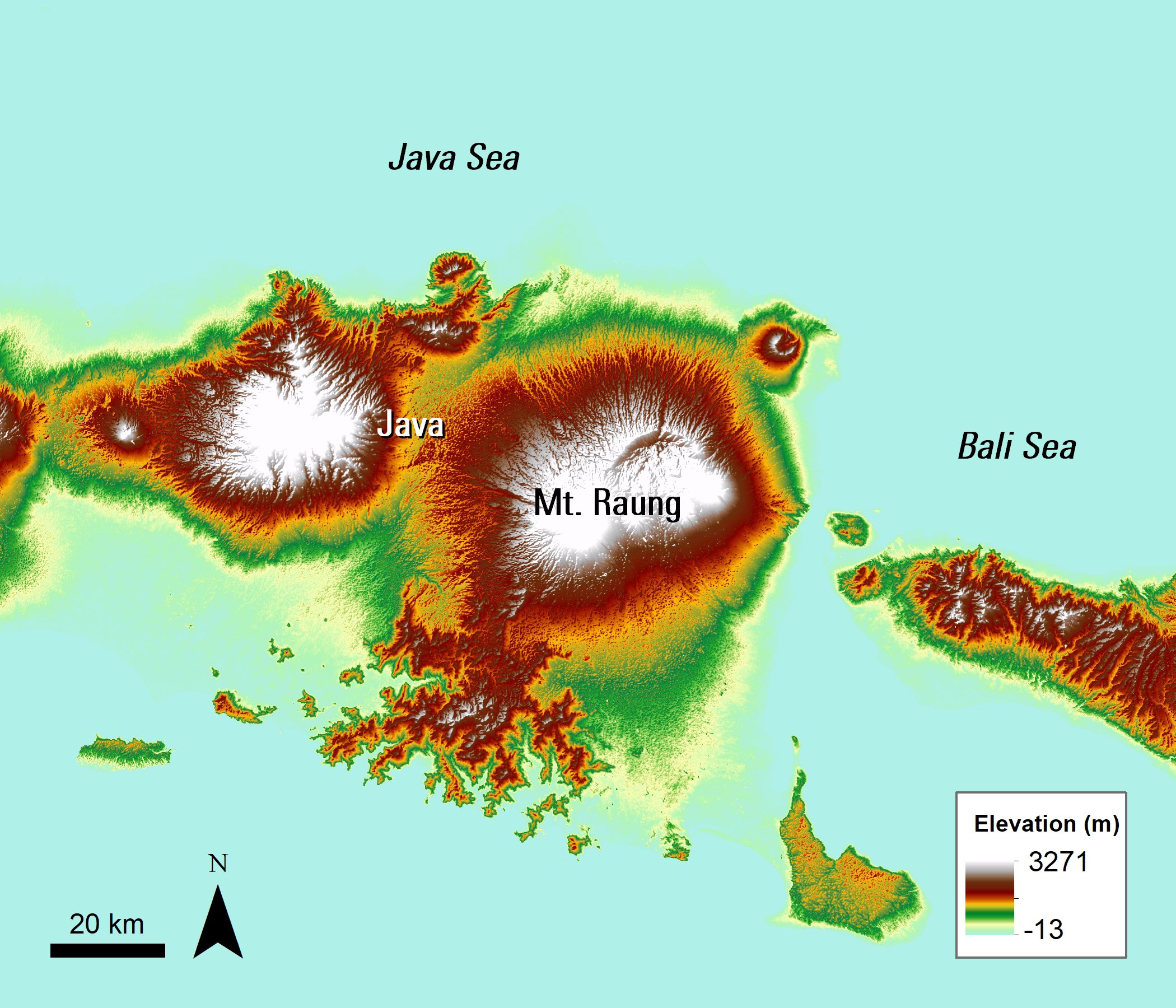 An ASTER GDEM image of Mt. Raung and the surrounding area, the study area of Kaneko and others (2019).

Mount Raung, one of the most active volcanoes in Indonesia, erupted between June 14 and August 13, 2015. This eruption created a temporary lava lake—a large body of molten lava contained within a vent, crater, or broad depression—on the caldera floor of the volcano. According to Kaneko and others (2019), the formation process of this type of lava lake is not well studied, so this eruption gave them the opportunity to learn more. The authors use a combination of high-spatial resolution imagery, including WorldView, SPOT-6, GeoEye-1, and Landsat-8 OLI, along with high-frequency infrared images from Himawari-8 AHI, to analyze the sequence of this eruption.The eruption included four stages: the Precursory stage, Pulse 1, Pulse 2, and finally the Terminal stage. They also use Terra ASTER Global Digital Elevation Model (GDEM) Version 2 data (ASTGTM) from the LP DAAC for topographic measurements to estimate the volume of effused lava, or lava that flows out of the volcano without an explosive eruption, based on lava bed bathymetry in the caldera. Using the GDEM data and photographs of the volcano, the authors found that just before the eruption activity started, the cone of the volcano increased in height by about 100 meters (m). During this part of the eruption, the lava effusion was continuous, only pausing between Pulses 1 and 2. The authors found the average effusion rate was 1.4 x 106 m3/day for a total estimated effusion volume of 7.5 × 107 m3. The authors believe the caldera floor uplift caused by this eruption will increase the risk of eruption material ejecting beyond the caldera in the future, which can harm the surrounding population. The authors believe studies like theirs can help us understand the characteristics of eruptions like the one at Mount Raung, which can be important in helping residents prepare for future and potentially more violent eruptions.