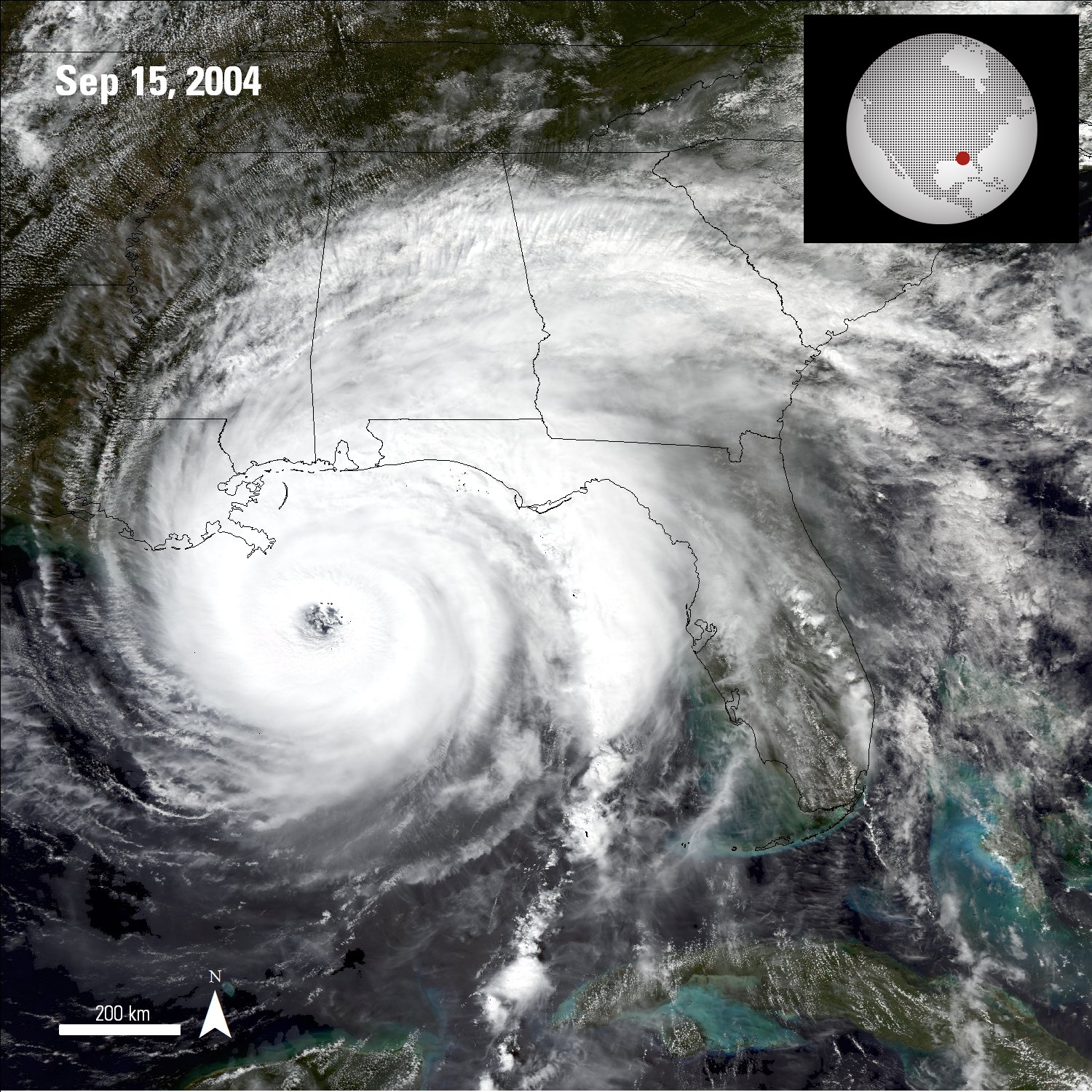 Ten years ago, in mid-September, Hurricane Ivan stormed across the Caribbean and eastern U.S. regions. Ivan was a unique storm, having intensified to a Category 5 hurricane on the Saffir-Simpson Hurricane Scale three times, made landfall in the U.S. on two separate occasions, and caused an outbreak of more than 100 tornadoes in 9 states across the eastern U.S.. Ivan first made landfall on September 16 just west of Gulf Shores, Alabama as a Category 3 hurricane. The system then travelled north through the eastern U.S., weakening to a tropical depression, but continuing to cause heavy rains and tornadoes. On September 18, Ivan converged with a frontal system over the Delaware-Maryland-Virginia peninsula, first strengthening, then again weakening as it turned south, and looping back around the Atlantic Ocean. The storm system crossed the southern peninsula of Florida early on September 21 and re-entered the Gulf of Mexico where it regained strength. By September 24, the storm made landfall a second time, near Holly Beach, Louisiana, but this time as a tropical depression.

Hurricane Ivan resulted in nearly US$15 billion in damage to the U.S. and more than US$3 billion in the Caribbean Sea region. It was estimated that 95% of the homes and buildings in the Cayman Islands were damaged or destroyed. An area that suffered a lot of damage in the U.S. were the barrier islands that make up the Gulf Islands National Seashore (GUIS), including Santa Rosa Island, near Pensacola, Florida. About 60 meters (about 197 feet) of shoreline from the Fort Pickens area, located at the western end of Santa Rosa Island, eroded away and the coastal highway system suffered from severe washouts.

The white arrow in the Terra Advanced Spaceborne Thermal Emission and Reflection Radiometer (ASTER) image from September 21, 2004 points to a breach in the section of Fort Pickens Road along Santa Rosa Island, which occurred when Ivan hit the island. Surrounding sections of the road were damaged or washed over.  The road also suffered damage during the 2005 hurricane season and did not fully reopen until May 2009. Use the comparison tool to view the changes in the Fort Pickens shoreline between 2004, post-Ivan, and 2014, ten years later. 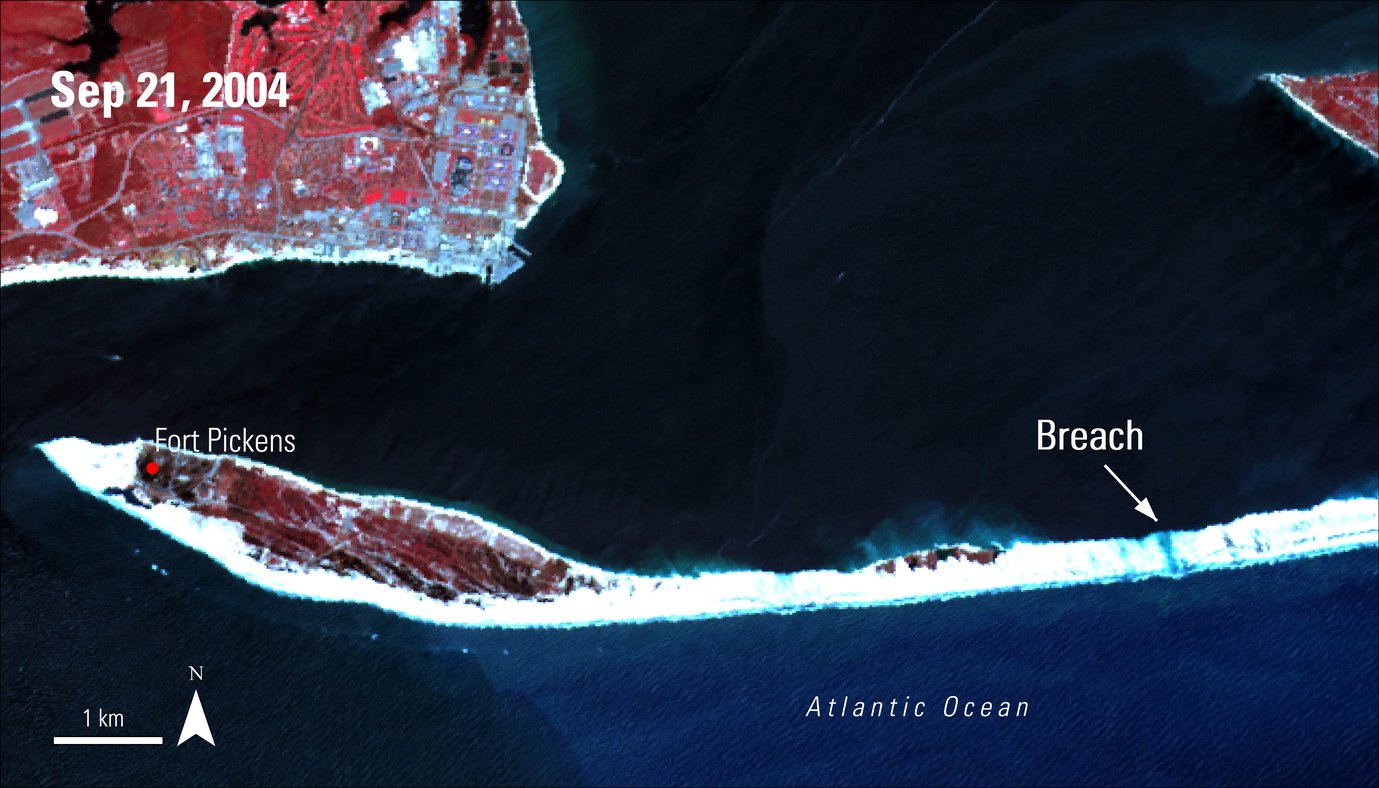 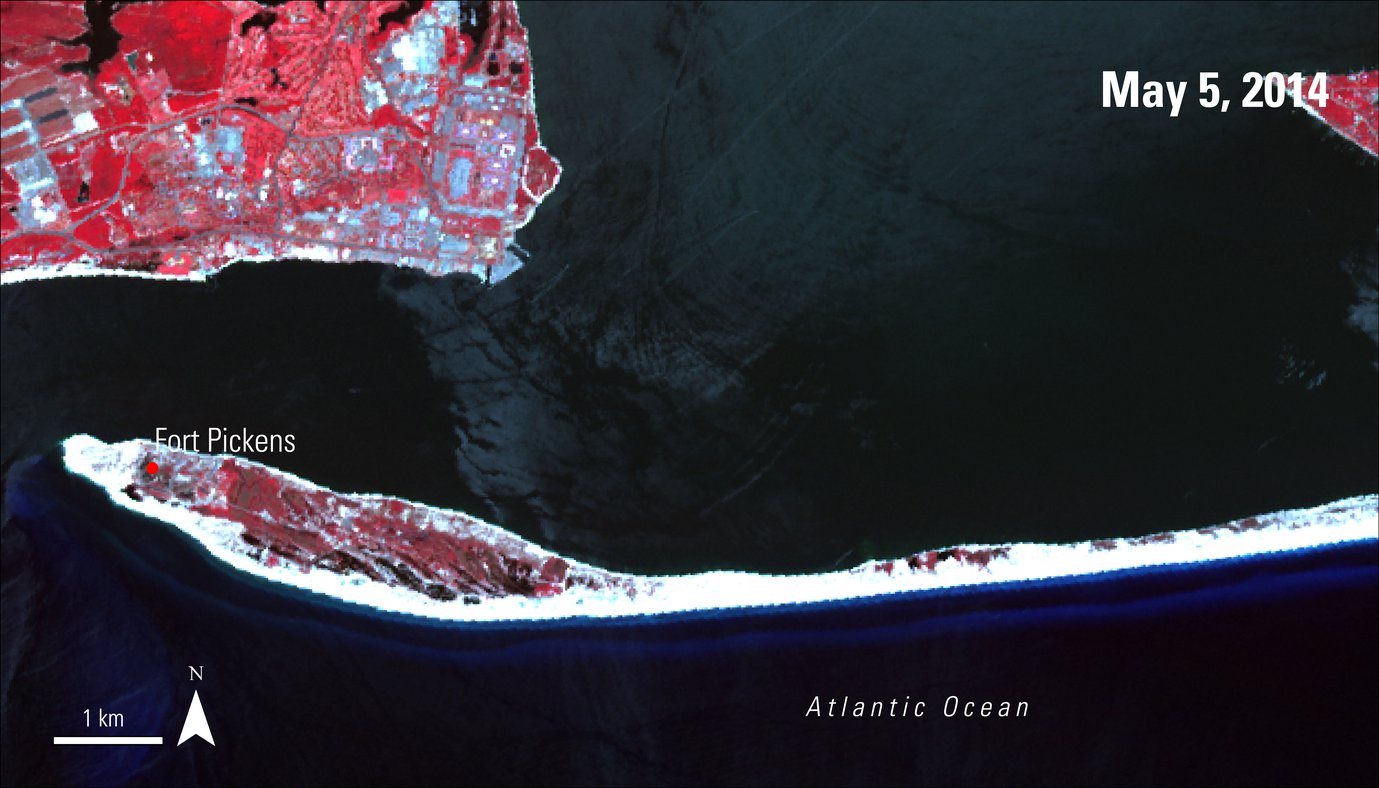