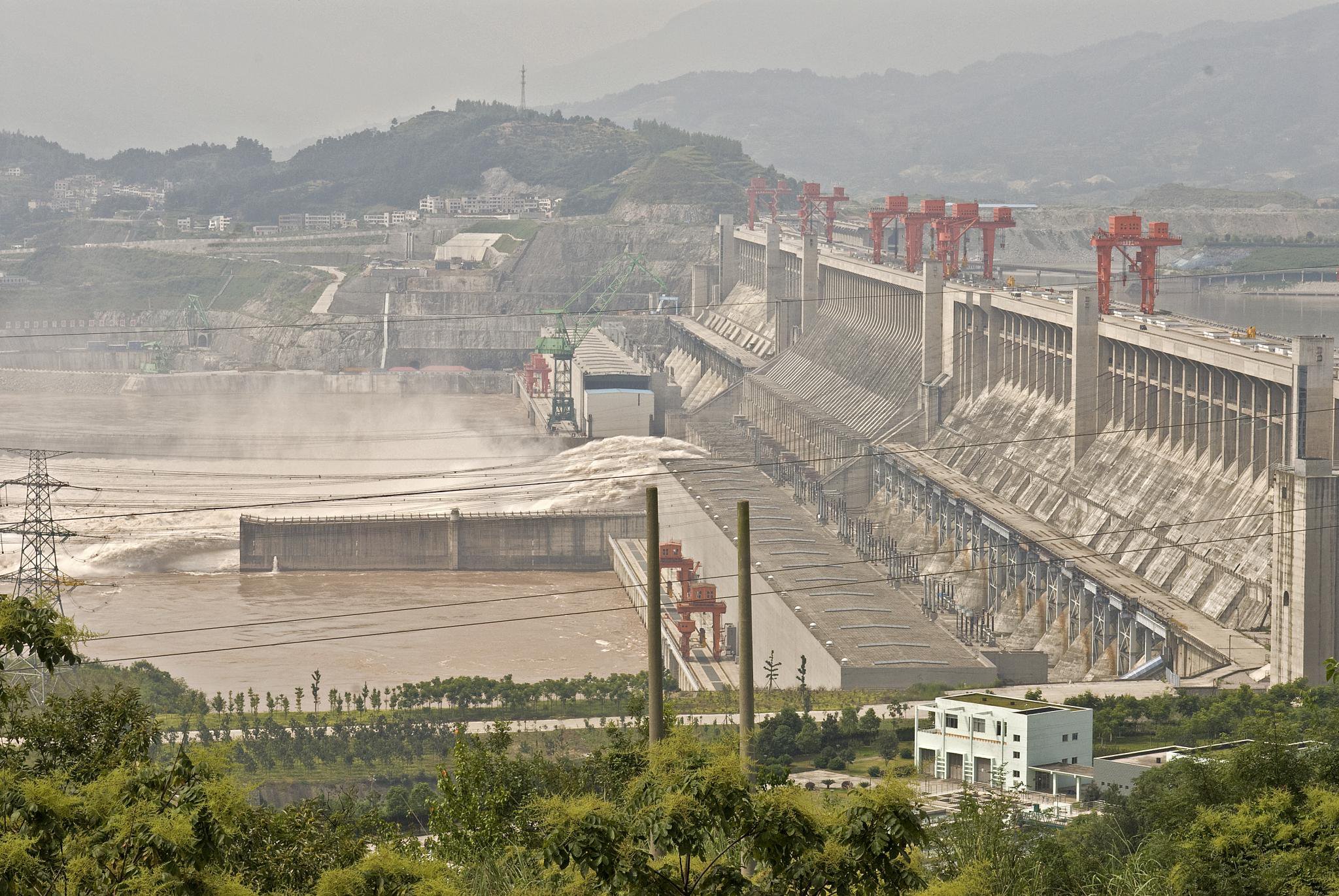 Mountainous terrain is visible in the background of this image of the Three Gorges Dam in China from 2008.

The Three Gorges Dam is the largest hydropower project in the world. Construction of the dam created a reservoir with a length of more than 600 kilometers, increased the depth of the Yangtze River, and impacted the local environment. In Kellogg and Zhou (2014), the authors investigate the impact of the construction of the dam on 100 kilometers of riparian areas of the Yangtze River at several elevation zones upstream of the dam. This study is on the forefront of understanding the magnitude of impact of elevation on the dam’s riparian zone.

In this study, the authors wish to determine if rising reservoir levels during construction resulted in changes to vegetation cover in several different elevation zones. The authors utilize vegetation indices data from the Moderate Resolution Imaging Spectroradiometer (MODIS), elevation data from the Advanced Spaceborne Thermal Emission and Reflection Radiometer (ASTER), and reservoir water level data from the China Three Gorges Corporation. Both the Normalized Difference Vegetation Index (NDVI) and the Enhanced Vegetation Index (EVI) from MODIS product MOD13Q1 are used to investigate the vegetation dynamics. MOD13Q1 data used for this study is from the region’s growing season of April to October and from the period of dam construction of 2000 to 2010. Vegetation cover type is classified by NDVI and EVI; higher values correspond to dense vegetation, medium values with sparse vegetation, and lower values with no vegetation. An AST14DMO data product of the region is divided into six elevation zones ranging from at-river elevation before construction (66 meters) to the top of the surrounding mountains (~3,000 meters).

The results show that during the study period vegetation at the upper three elevation zones (775 to ~3,000 meters) remained the same. However, decreases are observed in sparsely vegetated areas in the lower three elevation zones (66 to 775 meters), in densely vegetated areas in the lowest zone and in the initial river inundation zone (66 to 175 meters). An increase in dense vegetation cover is observed in elevation zones 2 and 3 (175 to 775 meters). The authors attribute the change in vegetation cover type to a possible increase in local atmospheric moisture and resulting precipitation caused by the construction of the Three Gorges Dam and the rising of the Yangtze River. Due to the mountainous topography of the area, and the possibility that evaporation and condensation could be constrained near the 775 meters elevation threshold, vegetation growth at higher elevations would be unchanged.

The wide variety of ASTER and MODIS products can be used for many scientific disciplines, including those that study vegetation change. 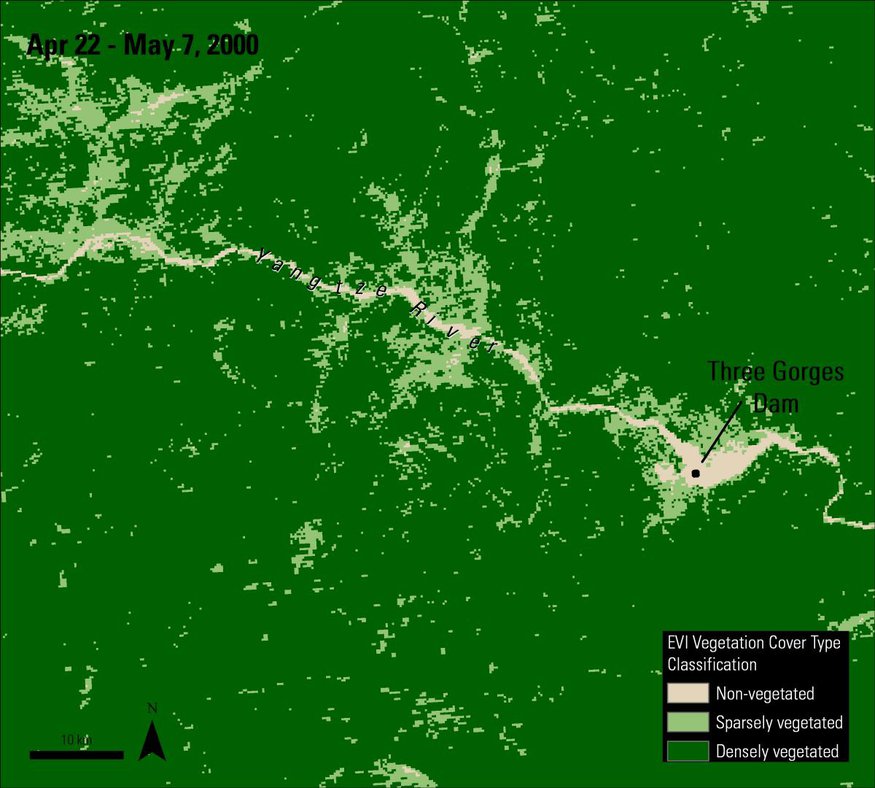 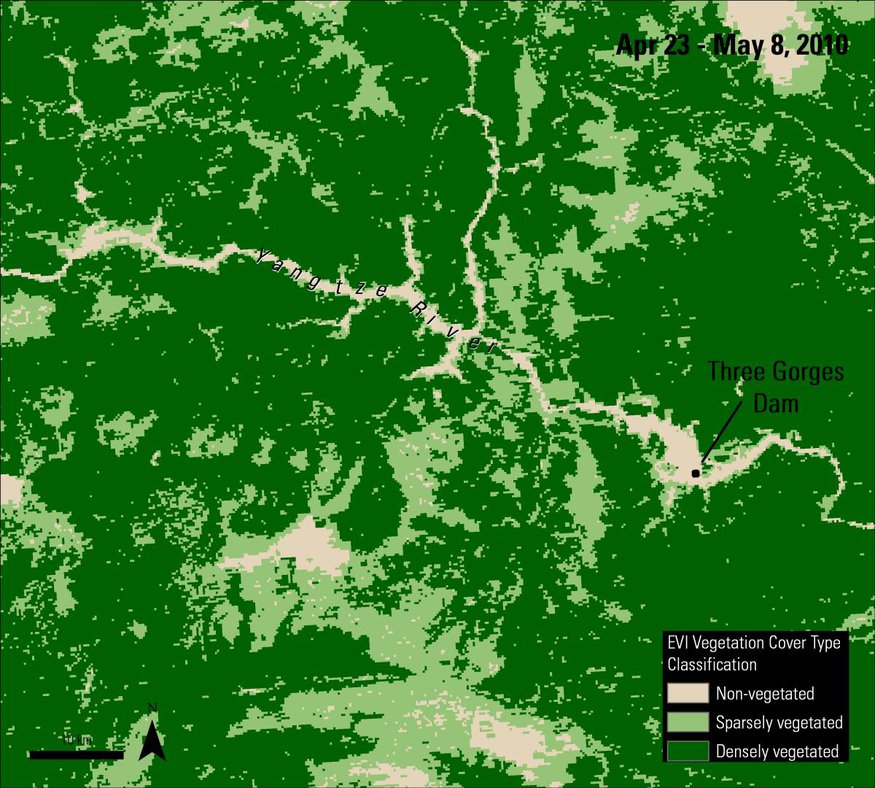 Left image: MOD13Q1 EVI image from the 16-day period, April 22 to May 7, 2000, near the beginning of the study period. The image is classified using the vegetation cover type classification for EVI values described in the article.

Right image: MOD13Q1 EVI image from the 16-day period, April 23 to May 8, 2010, near the end of the study period. The image is classified using the vegetation cover type classification for EVI values described in the article.

Read the article to learn more about the changes that occurred over the course of the entire study period.

References:
Kellogg, C.H. and Zhou, X., 2014, Impact of the construction of a large dam on riparian vegetation cover at different elevation zones as observed from remotely sensed data: International Journal of Applied Earth Observation and Geoinformation, v. 32, p. 19-34, at http://dx.doi.org/10.1016/j.jag.2014.03.021.