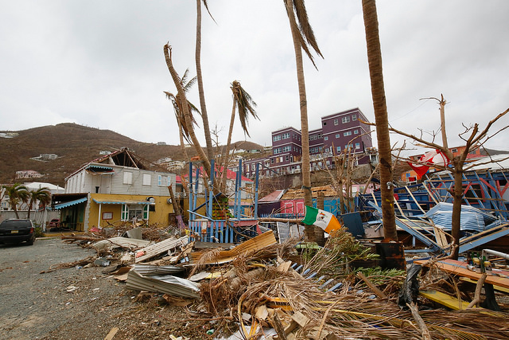 A view of the destruction in Road Town, Tortola, the capital of the British Virgin Islands, from Hurricane Irma.

The 2017 Atlantic hurricane season has already seen ten hurricanes, nine tropical storms, one tropical depression, and one extratropical low large wave, at time of publishing. Notably, this season included Hurricane Irma, which was the strongest hurricane ever recorded in the Atlantic Ocean outside of the Caribbean Sea and Gulf of Mexico. Damage from Irma can be seen in the image on the right. Satellites capture data about the Earth’s oceans, atmosphere, and surfaces every day. These data, like those distributed by the LP DAAC, can provide meteorologists with an extra eye in the sky to observe how a hurricane formed, where it went, how long it lasted, and how it impacted an area. Data from multiple satellite sources can aid in telling the full story of these storms.

Watch the video below to observe multiple hurricanes throughout the Atlantic Basin from August 1, right before Tropical Storm Franklin formed, to October 9, when Tropical Storm Opehlia was in the middle of the basin. This video is comprised of images created from Surface Reflectance data collected by two different satellite sensors: the Visible Infrared Imaging Radiometer Suite (VIIRS) onboard the joint NOAA/NASA Suomi National Polar-orbiting Partnership (Suomi NPP) satellite (VNP09CMG), and the Moderate Resolution Imaging Spectroradiometer (MODIS) sensor onboard NASA's Terra satellite (MOD09CMG). Together, these two sensors provide a full record of data to the public and scientific community. Using these data, scientists can learn from the 2017 Atlantic hurricane season to aid in better understanding and predicting future hurricane activity.

U.S. Geological Survey, 2017, Throughout hurricane season, USGS science is there before, during, and after the storm: U.S. Geological Survey News, September 13, 2017, accessed October 4, 2017, at https://www.usgs.gov/news/throughout-hurricane-season-usgs-science-there-during-and-after-storm.